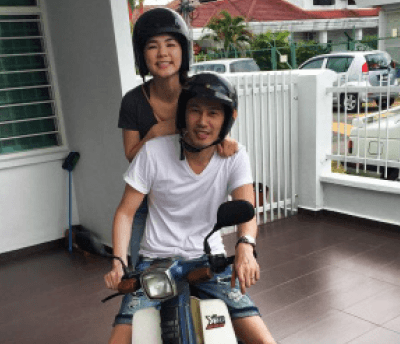 ELLA Chen, a member of popular Taiwanese all-girl group SHE, didn’t think much of it when she posted a lovey-dovey picture of her being pillion on a bike with husband Alvin Lai in Melaka.

The couple was getting ready to explore the Malaysian state — Lai’s hometown — during the Chinese New Year (CNY) season.

But her Facebook (FB) post triggered an immediate horde of responses from her Malaysian fans — all sharing the same concern: “Beware of snatch theft! Stay alert when you are on the bike in Melaka, it’s not safe!”

When Chen, 33, related the incident to Melaka-based media this week, she said: “Every time I am here, I feel at ease and don’t want to leave. This is a place I feel like I can be an ordinary person, leading an ordinary life.

“But I feel bad for the people here, because they are living their life so cautiously. A Malaysian colleague’s car was recently stolen, and now my Facebook post has caused much worry. My hope is that the security in Malaysia will get better and better.”

Chen, who married Lai in 2012 when he was working in Taipei for a cosmetic company, said she looks forward to participating in Malaysia’s movie projects, but foresees some language barrier.

“Perhaps I should act in a comedy depicting the challenges of a foreigner trying to fit into the local life. That could be funny!” Chen was quoted, by China Press.

Meanwhile, when JJ Lin, 33, was asked how it felt to offer his first silver screen kiss of sorts to Taiwanese veteran actress Lin Mei-hsiu, 47, he admited to feeling nervous.

The Singaporean singer-songwriter, a hot commodity in the Asia music industry, said: “It was a bit nerve-wracking before the shoot as I hadn’t met Mei-hsiu before. But her friendliness put me at ease instantly, and it turned out to be a relaxing experience working with her on the set!”

Fret not Lin’s fans, as the kiss may have been only a peck on the cheek, judging from the trailer of Taiwanese CNY comedy The Wonderful Wedding.

Lin plays a cameo, together with Taiwanese singer and actor Richie Jen. In one scene they plan to steal a kiss from the bride (Ruby Lin Xin-ru), but the matchmaker, played by Mei-hsiu, sabotages their plan and both gentlemen’s kisses land on her cheek instead.

The Taipei-based Lin said he decided to dabble in the big screen scene because he had long known the cast and the producer. He said enjoyed his role so much that he looks forward to taking part in more filming projects in the future. Taiwanese media has reported how he wouldn’t mind going back to funny roles in CNY flicks.

He unveiled in December a wax version of himself at Madame Tussauds Singapore, which was launched in October.

However, Lin’s 2015 got off on a wrong foot as he was punched by a man during an autograph-signing event in Taipei on Jan 1. Lin was quickly sent to hospital for a medical examination, but returned about an hour later, continuing to autograph copies of his new album Genesis for Taiwanese fans.