In contrast to the purely off-white exterior is the cool colour scheme inside, which beckons from the main entrance. The mood is further enhanced with a combination of classic and contemporary furniture. 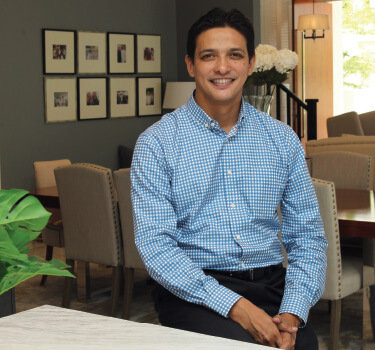 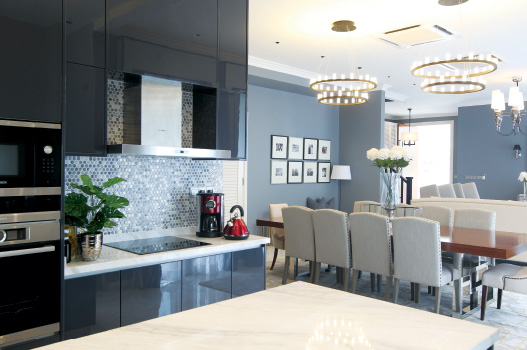 Elegant grey continues from the dining area and into the kitchen, where it takes on a darker hue in the cabinetry and is given a kaleidoscopic treatment in the mosaic splashback 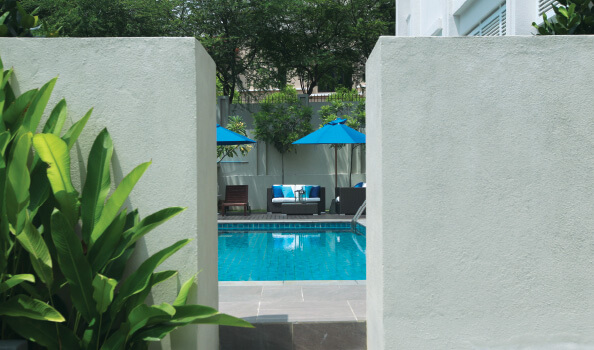 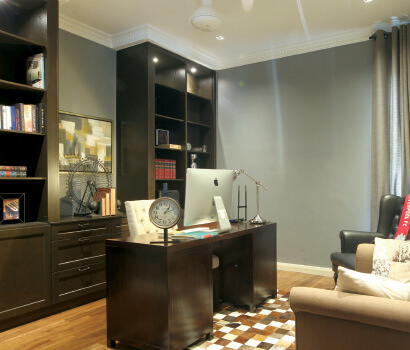 The entire upper floor is occupied by the master suite — with dark furniture and accents of gold — which includes the bedroom, a roomy walk-in wardrobe, an elegant study and a shared master bathroom with ample natural light 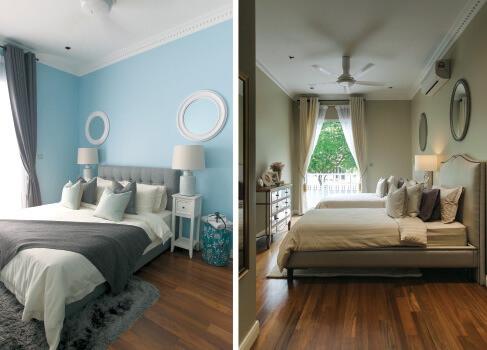 Going with a thematic approach for each bedroom means varying colours and furnishing styles. A recurring motif ties the spaces together — each one features two mirrors hanging above the beds expressed differently to match the room’s individual scheme. A mix of soft furnishings and linen were employed to achieve a warm, homey feel.

Celebrating diversity in design to create the perfect living space

Located in the upmarket neighbourhood of Mont’Kiara is a guarded residential development known as Serene Kiara, which comprises a cluster of neatly arranged off-white houses perched on higher ground and visible from the Penchala Link. One of the three-storey semi-detached houses in the area is home to Zulkifli Jafar and his wife, Nurul Aqma Anis.

The home maintains the original façade, identical to those surrounding it due to strict regulations imposed by the developer on alterations to the exterior. For this reason, the focus of their design and renovation works was on the interior of the house and the landscaping around the pool area. The couple enlisted the services of Zhreka Interiors to help achieve their desired home.

Zulkifli tells us that the house was semi-furnished when he purchased it sometime last year. “I stripped off everything, including the existing wardrobes and kitchen cabinets. We started working on everything from scratch,” he explains. As they did not limit themselves to a particular type of design, the end result is a combination of varying themes in the different areas of the house. The wooden flooring is perhaps the only recurring element throughout their home.

For instance, the kitchen, which is Zulkifli’s favourite part of the house, has a contemporary design with steel fixtures and a marble-top kitchen island. Meanwhile, the dining and living area has a classic, elegant feel, from the wood-and-steel dining table to the two double-tiered chandeliers that hang directly above it.

The ground floor has an open layout and instead of partitions, different shades of grey are used to demarcate spaces. It is a mix and match but within the same colour palette. What the owner wanted was a house that was masculine but still family-oriented, with not too much of a bachelor-pad-like feel.

According to Zulkifli, he drew his inspiration from a sea-facing bungalow that was to be built in Johor. “I immediately took a liking to the Mediterranean concept and I showed it to the designer. I wanted a similar concept but with a feminine touch to it.”

There are four rooms on the first floor, three of which are guest rooms while one has been converted into a prayer room. The house was initially all white, which was a little overwhelming, so the designer introduced a colour palette in shades of grey, blue and beige to add depth and character to the interior. Each guest room has a different colour theme, namely navy blue, pastel blue and beige. Despite the many colours, the general feel is cool and calm.

The second floor is occupied mainly by the master bedroom and a walk-in wardrobe that leads to the study and master bathroom. What was originally a two-bedroom area was remodelled to fit the needs of Zulkifli and Nurul, resulting in a personal floor with ample space. The couple chose to go with dark furniture against walls in a lighter shade of grey for this floor, with the exception of the master bathroom.

The study room has floor-to-ceiling shelves that are filled with law-related journals. A Liverpool scarf, spotted on a black leather armchair at the corner of the room, and a faux cowhide patch rug on the floor give the room a masculine feel.

A lift was also installed in the house to enable easy access to all floors.

The house is fully occupied when relatives come to visit. “I have quite a big family and whenever they are in town, they will stay with me,” says Zulkifli. His home is indeed ideal for this, though he also tells us that he and his wife have not had the opportunity to do much entertaining since they moved in early this year. The pool, located adjacent to the living area, is a nice spot for social gatherings or simply to relax in after a long day. “However, I have yet to use the pool since we moved in. Only my wife has used it,” says Zulkifli, a corporate lawyer with his own practice. Nurul is a project manager of an R&D company.

The landscaping around the house has a resort-like concept with a small water feature at the far left corner of the garden — an element that Zulkifli insisted upon having. “Running water is important for ‘chi’,” he jokes. While much creative freedom was given to the designer, Zulkifli says that the main consideration was “Coming back to a happy home”. And it is apparent that the house is all that and more.