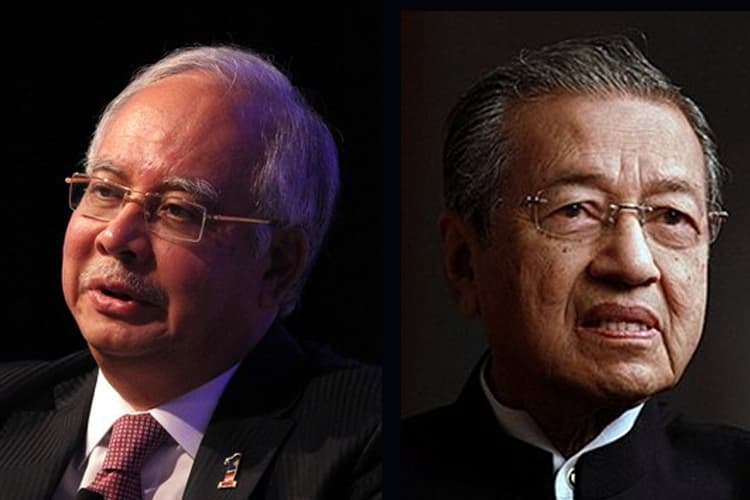 (April 10): The Malaysian election threatens to turn into the country's ugliest political brawl since independence more than 60 years ago.

In one corner, firebrand Mahathir Mohamad, the 92-year-old former prime minister. In the other, the scandal-plagued incumbent and former Mahathir protege, Najib Razak, who is determined to stay on top at all costs. So much so that Mahathir suggests he might be assassinated and has compared Najib's "dirty" tricks to those of Philippine dictator Ferdinand Marcos.

The election must be held within 60 days from Saturday when the prime minister dissolved parliament. And, for now, Team Najib is proving Mahathir right on the dodgy tactics front. Najib's Barisan Nasional coalition is redrawing electoral boundaries, banning Mahathir's Pakatan Harapan coalition from campaigning for 30 days, clamping down on the media and tossing budget-busting largess at supporters.

Yet for all the theatrics, there is little indication that the outcome of the election will significantly alter the trajectory of Malaysia's underperforming economy. Such complacency will come at a cost to Malaysia's future. There are three lost opportunities to consider as Mahathir vs. Najib serves up lots of drama, but few vital reforms.

One, rising national debt. Compared with, say, Japan, Malaysia's 51% debt-to-gross-domestic-product ratio may seem tame. Officially, national debt stands at about RM684 billion ($174 billion). But Malaysia's debt ratio exceeds the 40% level more consistent with regional peers, including the Philippines. By some measures, public debt has increased 10% per year on average since Najib grabbed the prime minister title in 2009. But who really knows? The numbers are untransparent. Mahathir's team, for example, claims debt could be almost twice what the government claims.

What if Mahathir prevails against the odds? He helped create the political system he now hopes to vanquish. In many ways, Mahathir's 22 years in power, from 1981 to 2003, were a golden era of economic development. His infrastructure ambitions morphed Kuala Lumpur from a tropical backwater into a gleaming financial center. Today, it features one of Asia's most impressive skylines. He perfected the sprawling patronage system that now protects Najib's scandal-rich tenure. Mahathir also cemented the race-based affirmative-action policies which discriminate in favour of the ethnic Malay majority and dent competitiveness.

Fifteen years after Mahathir left office, Malaysia's one-party-state matrix has saved Najib, 64, from political disgrace. Without its support he would have been ousted long ago. Najib's troubles began right out of the gate, when he created a new state fund called 1Malaysia Development Bhd. It was touted as a vehicle to attract more foreign-direct investment.

Two, a dearth of new ideas. The idea of a nonagenarian, who helped create the swamp from which Najib's 1MDB rose, now saving the day carries its own irony. The same goes for Mahathir's critique of Najib's track record of debt. Mahathir claims his government would be more fiscally conservative, but offers no credible policy tweaks. In fact, his signature fiscal pledge to abolish the 6% goods-and-services tax might only worsen the debt trajectory. Populism sells, and allowing consumers to save cash is a winner at the ballot box. But without corresponding increases in tax revenues from other sources, Mahathir's victory could spell fiscal troubles.

For too long, leaders argued Malaysia can grow its way to greater solvency. Thanks partly to Najib's electioneering, gross domestic product growth reached 5.9% at the end of 2017. Yet ask Japan or South Korea how relying on growth to erase debt is working out for them. Malaysia also is mired in the middle-income trap that afflicts developing nations around the level of an annual income of $10,000 per head -- where Malaysia is currently.

The next leader must figure out how to grow better, not just faster. Neither Najib nor Mahathir is ready to dismantle the policy at the core of Malaysia's dysfunction: a 1971 scheme giving the ethnic Malay majority first crack at government jobs, housing and universities. The plan was initiated by Najib's father, former Prime Minister Tun Abdul Razak. Forty-seven years on, it is still a productivity killer than disenfranchises the Chinese and Indian minorities and turns off foreign investors.

Also missing from both campaigns are plans to rekindle Malaysia's animal spirits. Najib, for example, talks a great game of creating high-skilled jobs and more dynamic labor markets. His plans to improve human capital via education and training fall short. Even if Mahathir pulls off a big upset, his platform is just as devoid of fresh strategies to boost incomes, tame inflation, stop Chinese and Indian entrepreneurs from fleeing to Singapore, support a startup boom or get the government's hands out of the economy.

Three, denting the national brand. "Game of Thrones" is a fun television show. In real life, the spectacle unfolding in Malaysia is a blow to its appeal as an investment destination and a production hub for multinational companies. A plotline that rarely gets explored is the extent to which Malaysia is stuck in a 1997-ish time warp.

Back then, Malaysia diverged from regional peers reeling amid the Asian financial crisis. Thailand, Indonesia and South Korea purged their worst excesses and recalibrated growth models. Malaysia Inc. circled the wagons, blaming speculators for its plight and imposing capital controls. In the process, it did more to fight globalization than harness its benefits. When Mahathir retired, the party turned to Abdullah Ahmad Badawi, who acted glacially slowly to lower Malaysia's anti-globalisation defenses. Najib has since accelerated the path toward mediocrity.

Malaysia is not vying for growth in a vacuum. While Najib angles to maintain power at all costs, Indonesia is leveling the playing field for small-to-midsize enterprises and raising its infrastructure game. Vietnam is remaking itself as the Plan B of choice for multinationals diversifying away from China. The Philippines and Thailand, for all their political dramas, offer alternatives to overseas executives looking to tap young, productive workforces.

By contrast, Malaysia features two dynastic leaders brawling over who is less corrupt, who will borrow more and whose Muslim piety is superior. The need to strengthen Malaysia's fundamentals is more acute than ever as U.S. President Donald Trump and China engage in a trade war that will almost inevitably bring collateral damage to other Asian economies.

Malaysia needs bold plans to extricate its 32 million people from the 1990s and forge a vibrant future. Instead, it is getting a personality-driven brawl between populists looking backward, not forward. This is a drama Malaysia cannot afford.

William Pesek is a Tokyo-based journalist and author of "Japanization: What the World Can Learn from Japan's Lost Decades." He has written for Bloomberg and Barron's.