EDUSPEC HOLDINGS BHD, which is riding the rising demand for the use of digital technology in education in Asean, seems to have reached an inflection point. 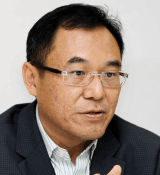 CEO Lim Een Hong is confident the company can sustain its growth trajectory over the next few years, especially since its expansion overseas has begun to bear fruit. It saw a huge jump in its latest fourth quarter results.

“Eduspec’s ambition is to capture 10% of the Asean market in five years,” Lim, who holds a 21% stake in the company, tells The Edge.

In the quarter ended Sept 30, 2014, the company’s net profit soared to an all-time high of RM7.17 million from RM1.33 million in the previous corresponding period while revenue more than doubled to RM29.06 million from RM11.75 million.

Eduspec (fundamental: 3, valuation: 1.2) provides innovative ICT education programmes for schools with a core strength of integrating and improving the usage of technology for the pedagogical needs of educational institutions.

Lim remarks that Eduspec’s business has high barriers to entry because of its long incubation period of one to three years. Furthermore, it is “very sticky” in terms of customer loyalty.

“You’ve to build up [capacity], from teachers and coordinators to master trainers, and provide technical support and so forth, but once you serve a school well, it always renews your services,” he says, adding that Eduspec is actively investing in initiatives that will result in continuous contribution several years down the road.

“What we normally do is to line up a scope of requirements and then build a road map for schools to deploy for three to five years. Within this deployment, many technologies are involved, all of which will be integrated in stages into new teaching and learning environments as well as administrative functions.

“One of the notable components of digital school solutions is our school management system. We have successfully deployed it in hundreds of schools in Malaysia and just started it in other countries, like the Philippines and Indonesia, where the opportunities for growth are immense,” Lim explains.

Eduspec serves about 400 schools in Malaysia, about 60% of which are Chinese schools. In Asean, it has provided its services to thousands of schools, 400 to 500 of which are committed customers.

Since 2010, Eduspec has shifted its strategy by extending its reach into overseas markets, most notably Indonesia, the Philippines and Vietnam, offering them its digital school solutions. According to Lim, it is now exploring opportunities for growth in Thailand and Myanmar.

Contribution from overseas operations has increased to 40% of annual revenue for FY2015. “We are confident of our expansion overseas. We have pockets of product development that we started two to three years ago that will see results in 2015,” he says.

Last July, Eduspec signed a memorandum of understanding with iCarnegie, an educational affiliate of US Carnegie Mellon University, in a joint venture to build a science, technology, engineering and maths (STEM) product and certification for students and teachers. Such products can be turned into large-scale models.

“We propose technologies for the individual needs of schools, developing programmes to help them build their capacity. The most popular of these are 21st century skill sets in terms of K12 — primary and secondary — and STEM education,” he explains.

“It’s up to us to localise it and take it to as many schools in the region as possible. It’s a very big business,” Lim says, adding that there is growing adoption of STEM education in countries around the world, along with large allocations to education in national budgets.

“We are looking at more operational capacity in Malaysia and have started going into private, international, high-performance and boarding schools — and we’ll probably see some growth in this area next year.”

Lim says the company is also keen on government projects. 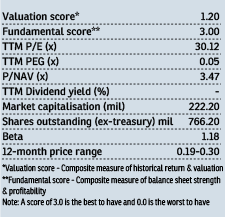 Eduspec allocates about 10% of its turnover to R&D every year. It also plays a part in YTL Communications’ 1BestariNet project, through which Eduspec helped to popularise the use of the Google Chromebook by developing the Chrome Lab concept and facilitating its delivery.

Not surprisingly, Eduspec’s shares have been resilient in spite of a jittery broader market in the past six months. The stock has hovered at around 22 to 29 sen since July and closed at 29 sen last Thursday, giving it a market capitalisation of RM220 million.

The company’s clean balance sheet with net cash of RM16.46 million as at Sept 30 explains its high fundamental score of 3.