edunation: Not enough focus on the feeder for higher education 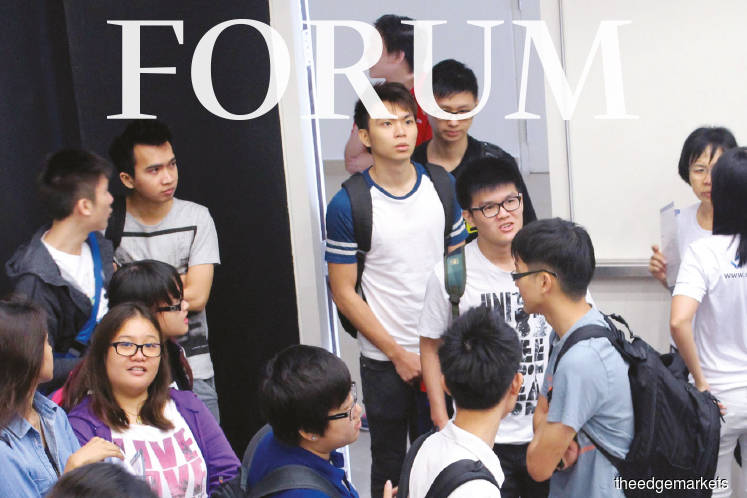 About 80% of the amount will be spent on operations, mostly on teacher emoluments, leaving very little, the remaining 20%, for growth and substantial items.

Most of the allocation in Budget 2020 is going towards higher education and technical vocational education training (TVET). Looking at how much we want to accomplish in education, especially with the strong focus on TVET, there are a few causes for concern, especially the transition from secondary school. The Shared Prosperity Vision 2030 indicates that it wants to attract 60% of SPM students to vocational training but as to how and how much it is willing to spend on doing so is not indicated or clearly budgeted for. The indicated budget for development (non-infrastructure) of schools comes under the RM11 million for science, technology, engineering and mathematics (STEM), in collaboration with the Ministry of Energy, Science, Technology, Environment and Climate Change, and RM10 million for e-sports.

Infrastructure allocation for the schools of choice — some 7,859 of them nationwide — and the national primary and secondary schools (SK and SMK) in Budget 2020 is RM300 million for maintenance, upkeep and improvements. This means each school gets RM38,173 compared with the RM925,926 for Maktab Rendah Sains MARA (MRSM) — the highest allocation per school — RM250,000 for Chinese independent schools (SMPC) and RM95,420 for Tamil schools (SJKT). The irony is that though the government does not recognise the UEC examination for entry into public higher institutes of learning, there is a huge allocation for SMPC. But, more importantly, how can we expect to improve the outcome and performance of our national schools that are evidently underperforming with them having the lowest per school allocation?

Based on the findings of PISA (programme for international student assessment) 2012, the level of achievement of more than half of our 15-year-olds is three years behind their top performing peers in the world. They are at the same level as Singapore’s 12-year-olds. On top of that, our 15-year-olds are termed as “at risk of later failing to successfully integrate into the labour market and society more generally and are not expected to continue beyond compulsory schooling”.

PAGE is pleased to note that Budget 2020 has given STEM due attention compared with none at all in Budget 2019. But will the RM11 million allocated to it be enough to do what is needed for STEM, that is to produce 500,000 more scientists, increase STEM-qualified human capital, stimulate the majority of SPM qualified students in TVET to take up and inculcate STEM culture? It seems to be a tall order for what is expected of RM11 million.

We would like to also see the scaling up of the dual language programme (DLP) to more schools. There should be an allocation for this programme as what was done in Budgets 2016 and 2017 — allocations of RM38.5 million and RM90 million respectively, especially for DLP and HIP (highly immersive programme) for English when it first started with 300 pilot schools in 2016 and additional 500 schools in 2017. As it is now, there are about 1,300 schools running the DLP programme. However, we do not hear of the programme being scaled up for the upcoming year except for schools in Sarawak. All 1,030 primary schools in Sarawak are expected to start DLP from Standard 1 next year. Sarawak has allocated RM9 million for teacher training and resources in their preparation for next year.

We would like to see funds being channelled into training teachers in STEM using English as the medium of instruction in these institutes of higher learning for teacher education. This should also be extended to current teachers as part of their continuous training development programme, to upskill themselves in English for the teaching of STEM subjects as DLP teachers. The STEM subjects are mathematics, additional mathematics, science, physics, chemistry, biology, information technology and communications and design technology.

The trust school programme uses existing government resources at an additional cost of RM50 per month per student. Perhaps, the government could pursue public-private partnerships with corporations and combine them into some form of government voucher system, as mentioned in the Pakatan manifesto.

We wish to see better allocation to programmes that would have higher impact on school-going children’s learning outcomes. Otherwise, all the talk about creating a shared prosperity is just another empty promise from a budget skewed to being politically popular.