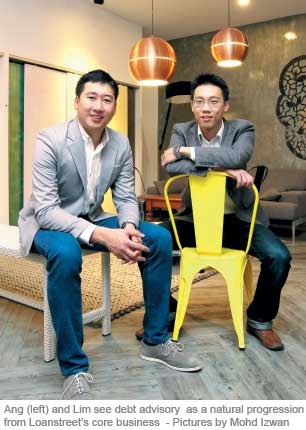 LOANSTREET, an online loan comparison platform, has moved into a new area of service — helping individuals navigate out of debt and bankruptcy.

What is a two-year-old start-up, founded by young entrepreneurs Jared Lim and Robyn Ang, doing in the unlikely field of debt advisory?

Well, they are doing it for personal and professional reasons. Lim has had experience trying to help his family overcome their debt.

Loanstreet’s competitors are websites such as RinggitPlus and iMoney, which offer free online comparisons for a full range of financial products, from loans and credit cards to savings accounts. In fact, iMoney last year diversified its revenue stream by adding a service that is akin to a mortgage brokerage firm.

Lim says Loanstreet’s new service is an offshoot of its growing brand and service offering as online experts on all things credit related. These are niche services where there is not much awareness in Malaysia, and Loanstreet.com is out to change that.

Although the bulk of the enquiries on Loanstreet’s website is related to loan products, it also notices that more and more people are saying “I can’t get a loan” or “I’m struggling with debt”.

“We get all kinds of enquiries and appeals for help and we thought, okay, firstly, there’s an addressable market. Secondly, some of these people are really pitiful, so if we have the expertise and can provide a service, and it can cover the costs, then let’s do it!” says Lim.

This led Lim and Ang to roll out Loanstreet Pro, a paid customised service, 12 weeks ago.

The profile of clients at Loanstreet Pro is very different from the users who come to Loanstreet for free information on mortgages and personal loans.

For Loanstreet’s core services, most of the clients are young professionals, aged between 24 and 45, says Lim. This makes sense because those who are eligible for mortgages and loans need to show their income stream.

But for the customised debt advisory service, he says most of the client are middle-aged.

“Some of them are failed entrepreneurs. They took loans to start some business and found that after a while, it could not be sustained. Then, they become heavily in debt and some of them go bankrupt,” he adds.

“A lot of them haven’t given up, so this is where they can go to for help.”

Loanstreet’s new services include helping customers get a reduction in debt amounts, obtaining temporary travel documents, opening bank accounts and advising on bankruptcy discharge for insolvent individuals and updating services for CTOS records. (CTOS is an organisation that collects information on summons and bankruptcy of individuals and companies registered in its electronic database.)

“With our debt restructuring advisory, we get haircuts from creditors on behalf of our clients. Our records show that we can achieve as much as 70% savings on the original total proof of debt,” Lim says.

Apart from negotiating with creditors to reduce the debt amounts, Loanstreet Pro tries to restructure loans by switching clients to facilities or loans that are cheaper than their existing ones.

Lim says there are clients who are unable to get loan facilities on their own strength.

One could say that Loanstreet is a privatised or paid alternative to the Credit Counselling and Debt Management Agency (AKPK). Lim always advises clients to check with AKPK before engaging Loanstreet Pro.

“We don’t compete with AKPK,” he says. “In fact, we advise customers who qualify for AKPK’s programme to go for it.”

However, AKPK’s services are only available to applicants under strict conditions — there must not be creditors who have initiated legal action against them and their income must be higher than the total debt burden. In that sense, some people who need help are left out.

“For Loanstreet, although we are very selective about clients, our addressable market net is cast much wider. We provide services for people across the whole spectrum, including bankrupts,” says Lim.

Loanstreet filters its clients case by case. Lim points out that it is difficult to standardise the filtering process, but it assesses the individual’s income, commitments and his creditors.

“We will also assess the client’s net worth, his age and background, and qualitatively understand how far, if any, legal actions have been taken against him,” he says.

“We don’t just do debt restructuring and bankruptcy. There are a lot of people who are unable to get loans because their names are found in CTOS … especially entrepreneurs, when their companies are wound up, they end up in CTOS. So, what we do is provide a service to update the records in CTOS — at least it gives them a chance to apply for credit facilities again.”

Lim says clients are charged a mobilisation fee of about RM2,000 upfront to cover initial costs. He adds that it is a very involved process, as in some cases, it may take as long as six months to strike a deal with the creditors.

“There will be a final bill when we reach a settlement with their creditors, and we take a cut from the savings achieved. For example, if we saved you RM100,000, we will take a percentage of that sum.

“That way, you don’t pay out of your own pocket, you pay from the savings. It could be as high as 40%, but you can imagine how difficult the process is if it takes six months. Six months of meeting creditors, I tell you, is really painful, and if we fail to reach a settlement, we are actually running at a loss,” says Lim.

“But this is only if we accept you as a client. If we direct you to AKPK, we don’t charge anything. In fact, there are some unscrupulous businesses out there that charge people even if they direct them to AKPK. We advise people to be careful.”

Since Loanstreet launched its new service, it has received more than 50 customised service requests. Lim says they are actively working on a handful of cases that will take a while to complete, and have successfully helped one client to date.

“We’ve found that there are many people who should engage the services of professional credit negotiators and advisers before it’s too late ... especially debt restructuring where the service should pay for itself,” he says.

In addressing this issue, Lim says they deploy retired lending officers who are experienced and well connected with credit departments.

A case study in debt restructuring

Loanstreet is selective when it comes to taking on clients. This is to ensure that it can achieve success and not overpromise on what it can do.

In fact, it has turned away many cases, not because it did not want to help but because there was nothing it could do. Lim laments that there are many hopeless cases.

“Previously, we had one or two customers who thought that we were obligated to help them … believe me, if we could, we would.”

Lim cites the case of an elderly client with a failed business. When the business was not doing well, he started drawing money using his credit cards, which carried high interest rates.

The man had approached AKPK first for debt restructuring and things went well for some years until he filed for bankruptcy.

Recently, this man engaged Loanstreet Pro, which found that he had a strong case with his creditors.

“We are going in and negotiating for him. We are confident of reducing the debt from 50% to 70%,” says Lim.

“You know, when you are old, it’s easier to negotiate. What happens if you die tomorrow? The creditors will get nothing. So, they might as well get a smaller sum, a lump sum. Then, slowly walk him through the process of getting a bankruptcy discharge.

At the end of the day, Lim does not see Loanstreet’s debt restructuring service as a major revenue stream.

“Honestly, we’re doing this more as a service. It’s partly profit-oriented and partly because we get a lot of enquiries from our customers,” he says.

Its core business is still the Loanstreet platform. Since its launch two years ago, Loanstreet has received more than 1,000 enquiries about credit products every month. The site boasts over 100,000 unique visitors per month and over 300,000 page views.

Lim says Loanstreet’s goal is to be the largest distribution channel for credit products.

If Lim and Ang are right about banking on customer engagement moving online, they might just have a shot at it.