#edGY: Spotlight on women in science

LOOK INTO the world of scientific research and women are not likely to be a big part of the picture. Just 30% of the world’s researchers are women, according to data from Unesco Institute for Statistics.

While a growing number are enrolling in university, many women opt out at the highest levels required for a research career, notes the Unesco Institute for Research.

But a closer look at the data reveals a mixed picture, with some countries having a better gender balance in research than others. For example, in Bolivia, women account for 63% of researchers, compared with France (26%) and Ethiopia (8%).

Nevertheless, the gender gap in scientific research is an ongoing issue. Even if there is a high participation rate for women in science in certain countries, many of the decision-making roles are dominated by men.

In Malaysia, things aren’t quite so dire.

Country data by the Unesco Institute for Statistics show that 49% of researchers in Malaysia are women. This is higher than the regional (East Asia and the Pacific) average of 20%.

In Malaysia, the data show several interesting trends when it comes to women’s participation in research. First, there appear to be more women researchers in the public sector (52%) than in the private sector (31%).

By sector, a slightly higher number of women researchers is in the natural and medical sciences (51% each). There seem to be fewer women in engineering and technology research (45%) and social sciences (47%).

One initiative to promote the role of women in research is the L’Oréal-Unesco for Women in Science Fellowship. Since 2006, the programme has awarded three fellowships to young women working in scientific research. They must be PhD holders, aged 40 and below, with an ongoing research project. Award recipients receive a research grant of RM30,000 each.

L’Oréal Malaysia managing director Ashwin Rajgopal, in his speech at the event, notes that women are still largely under-represented in scientific professions in most countries, including in Malaysia. “Naturally, the situation has improved over the years. Yet, a high school girl is three times less likely than a high school boy to go on to earn a doctorate in science,” Ashwin says, quoting a recent report commissioned by the L'Oréal Foundation.

“The research goes to prove that there are just not enough women at the top in scientific fields. For example, with regard to Nobel prizes in the sciences, less than 3% have been given to women since the award was founded.”

Chan’s work aims to find a way to reduce the infection rate of Enterovirus A71, which causes hand, foot and mouth (HFM) disease in children. She is developing a new protein drug that targets the host autophagy (when cells “eat” the virus and contain them).

Her research will help numerous children if successful. Enterovirus A71 has caused regular outbreaks of HFM that have affected tens of thousands of Malaysian children and is a major public health concern.

In Malaysia, HFM is one of the most common infections. It is a very contagious virus — by the age of 12, 70% to 80% of Malaysian children would have been infected by it.

Some patients experience mild fever and skin rashes inside the mouth or on the skin of their hands and feet. However, complications, although rare, can occur where patients suffer neurological or cardiac complications that are potentially fatal.

#edGY: At what point in your life did you decide on a career in science? Who or what inspired you?
When I did my final year research project during my Biomedical Sciences degree, I realised I was good at it and liked it very much!

Doing my PhD, I learnt how to do good science — to think critically, to take time to design experiments and have proper controls in place.
Science is a process of learning and unlearning. It encourages me to think outside the box. I can ask questions and systematically test out the answers.

What are the challenges that women scientists face in Malaysia?
I have to wear many hats: scientist, teacher, manager at work and, back home, I’m a wife and mother. The other challenge is being young of age or in looks. It is hard to get credibility.

Research is a long and often frustrating process. When do you feel discouraged and what keeps you going?
It (science) is not a lucrative career. We are poorly paid. A lot of it (the work) is self-driven. You need to be an inspiring teacher, world-class scientist with publications, grants and patents.

Passion for what you do is very important. I have a bunch of people around me who are very helpful and supportive, such as my research team, family, colleagues and friends. If you fall — say your publications or grant applications get rejected — get up and walk again. Don’t let anyone look down on you for being young. Instead, prove yourself, and say you can do it.

What advice would you give young women considering a career in science?
Believe that we can be world-class scientists, a lovely wife and a wonderful mum. Always believe in the 3Ps — passion, perseverance and positive thinking.

Wahizatul is developing a new form of pest control for oil palm trees. She is studying entomopathogenic fungi as a biological control to replace synthetic insecticides.

This method is special because the fungi only attacks insects and does not harm crops or human beings. It works against more than 200 species of insects.

If she succeeds in her research, the palm oil industry could benefit from reduced use of environmentally and humanly hazardous insecticides. Malaysia has over four million hectares of oil palm plantation and is one of the world’s largest palm oil producers. A key problem is the Red Palm Weevil pest, new to Malaysia, that could threaten the industry.

Wahizatul’s research could also produce a more cost-effective pest control method as the fungi can be mass produced and is likely to be cheaper than insecticide.

Have you experienced any challenges or prejudice as a woman scientist?
Yeah, gender bias in science is real. For example, our KPIs are being calculated based on the standard for men. There should be a different set of KPIs for women; you need to consider that we need to take care of our children. There are more male than female professors in university. Of the top management, most are male.

Even though the number of female students [in tertiary education in the country] has grown over the years (the ratio of female to male students is about 5:1), not as many female graduates find employment. So there’s gender bias.

Is there a stigma against married women in the workplace?
Once you get married, people expect less from you, but I want to prove them wrong. I have three children but I can be better than the single women out there. I want to show that even though we are married, it would be a mistake to underestimate us!

What are the advantages and disadvantages of being a women researcher?
You will definitely get recognised because there’s so few of us. The disadvantage is the [mistaken] perception people have of women scientists, but to change their perspective takes time. We have to prove that getting married is never a wrong decision for our careers.

What advice would you give young women considering a career in science?
The first thing is to choose a research area you like, not because you want to earn more money or follow your supervisor’s order. Once you enjoy it, you will be passionate about what you are doing. The desire to be successful must be greater than the fear for failure. You need to be physically and mentally fit for these commitments and know how to manage your time between work and family.

Noorhafiza is developing a high-performance, cost-effective stent for angioplasty, an operation to repair or unblock blood vessels in the heart. Angioplasty is typically an expensive procedure.

If successful, her work could help patients suffering from coronary artery disease but cannot afford surgery. Heart disease is one of the leading causes of death in Malaysia. The most common type is due to the blockage or narrowing of the blood vessels that carry blood to the heart.

Noorhafiza’s research involves laser surface texturing of a bare metal stent. The texturing is to facilitate faster endothelialisation (healing) — the bare metal stent might cause a superior and appropriate healing response from the tissue.

She is currently in the advanced stages of testing its performance and compatibility with human cells. If successful, her discovery can be applied during stent production and be made ready for practical use.

What draws you to research and science? If you weren’t doing scientific research, what would you have done?
I was inspired to conduct this research while pursuing my PhD at the University of Manchester. During the early stages, I sent a stent image that was processed by laser for a research image competition.

To my surprise, I won the Best Image Award and was acknowledged internationally. That was the starting point. From there, I began to delve more into coronary stenting and laser technology as a solution.

My passion was to be a medical doctor. I wanted to save lives. However, I had no chance to pursue my studies in the medical field at the earlier stages of my education.

What other research areas would you like to tackle?
I aim to research diabetes next. My mother suffers from diabetes and I can see how it affects her with each passing year. It leads to complications such as nerve damage — pain, tingling, numbness and loss of feeling in the hands, arms, feet and legs. I want to help.

Have you ever experienced prejudice as a woman academic, being in a traditionally male-dominated field? If so, what do you have to say about it?
I feel very lucky to have positive people around me. And if someone shows negativity, I take that as a challenge. I want to prove to the world that I can be a successful and great scientist at a young age and an inspiring role model for young women.

What advice would you give young women considering a career in science?
Always seek opportunity. Shoot high. Science is absolutely challenging but keep going. If you work hard and do your very best, it will work. Never give up! Giving up will take you nowhere. 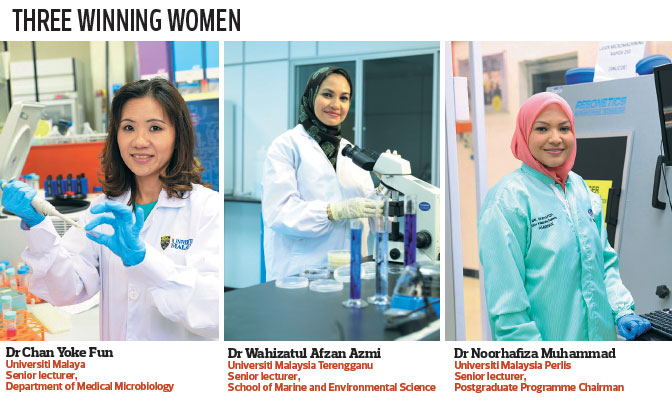