IN THE current tech start-up scene, many young entrepreneurs aspire to build popular business-to-consumer (B2C) solutions. After all, the seemingly overnight success of Facebook, Instagram and Uber has lent the perception that the B2C route is “sexier” than a business-to-business (B2B) one.

But look at the crazy valuations that China e-commerce site Alibaba Group Holdings Ltd fetched in its recent initial public offering. In the past week, Alibaba’s share price surpassed US$100 (about RM335) apiece on the back of strong earnings reports, with its market capitalisation going over US$250 billion.

In Malaysia, a notable success story would be the sale of JobStreet Corp Bhd’s business for RM1.73 billion to SEEK Ltd, an Australian Internet job recruitment portal. JobStreet’s market capitalisation stands at RM1.92 billion as at last Wednesday.

Could the tide now turn for B2B ventures in the eyes of investors?

One Malaysian start-up that is on the rise is Socialwalk, an online initiative that has been quietly serving the B2B segment of the food and beverage (F&B) industry across nine countries.

This goes from manufacturers and producers to middleman traders (importers, exporters, distributors and wholesalers) and retailers such as supermarkets looking for products and produce. The only part of the value chain Socialwalk does not serve is in the last mile — selling to end consumers.

The platform works by helping businesses discover new B2B connections and make deals based on demand and supply matches in the system.

Socialwalk’s biggest asset is its database of over 200,000 members. The growth in number came organically, thanks to Tham’s strong relationships with event organisers during Socialwalk’s first iteration as a ticketing platform for conferences.

These days, Socialwalk is in its third iteration and has a team of 15 employees. It grows its database by participating in as many trade shows and exhibitions as it can.

There, it gets attendees to sign up for a free account on apps.socialwalk.com and set up a basic profile. This allows other Socialwalk members to get in touch if they are interested in a member company’s product offerings.

Like dating apps such as Tinder, Socialwalk enables users to indicate interest in each other. Mutual interest then opens up a messaging feature for further communication.

It also has a paid account option where a Socialwalk representative will step in and take on a more active role in matching businesses.

“Here, a salesperson talks to you about your business requirements. We personally take a hand in selecting the F&B business types that benefit your business and introduce them to you via email as well as face-to-face.”

To date, Socialwalk has run its business matching services in over 400 exhibitions. On average, such exhibitions are attended by 15,000 to 30,000 people, which in turn generate about 3,000 to 5,000 registrations for the online platform.

Socialwalk does not have data on the total value of transactions it has facilitated. This is because its role is purely in introducing and matching, instead of closing the deals.

It is impossible for anyone attending an exhibition to meet every single person there. This is where Socialwalk steps in.

“Quite frankly, you would not be able to meet 30,000 people — 100 a day and you would be a king networker already. And out of the 100, there are some that are really not right for you. So, we meet the inefficiencies that exist in the system,” says Tham.

Introductions are still an important part of the deal-making and transactions in the B2B world that Socialwalk operates in. Social media and e-commerce have not changed things very much in this space, Tham observes.

Socialwalk sees the most activity with manufacturers, distributors and retail buyers.

“They are always on the lookout for new deals, new relationships. It never stops,” he says.

Socialwalk is also useful for vendors who want an introduction to big name distributors and retailers, like hypermarket and supermarket chains. But the most crucial value add is for those who want to sell to different markets but are not quite sure where to start.

“Most of the relationships we build are cross-border. So, you don’t even know who you don’t know. It’s very similar to LinkedIn even though we deal with a market that is more like Alibaba. But our software doesn’t function like Alibaba. It functions a lot like LinkedIn,” Tham reiterates.

It has partnerships with exhibitions across nine countries: Malaysia, Singapore, Thailand, Indonesia, China, India, the United Arab Emirates, the Philippines and Vietnam.

A recent success case for Socialwalk is a manufacturer from the Philippines called Mama Sita’s Holding Co Inc, a prominent F&B manufacturer in Manila. Mama Sita’s wanted to expand beyond the domestic market but did not know how.

“So, in such cases, manufacturers would typically bring their products to trade shows. What we did was to recommend to her some of the distributors who were looking for her product, and what their networks and purchasing budget were like.

“In the end, one of her successful matches was a distributor who has a very strong market in the Middle East, reaching out to about 450 supermarkets and hotels,” Tham says.

Once Tham and his team have covered all the points in the F&B industry, they will expand into the beauty and cosmetics industry, solely because of their overlapping member base.

Competition, growth and the longer term

Tham is optimistic that the larger macroeconomic changes at play in the region could augur well for his business in the region.

This is because in manufacturing, there has been a shift away from the southern region of China towards Southeast Asia.

“The timing is perfect for us … Countries like Vietnam, Thailand and Cambodia are seeing a huge influx of manufacturing work and this puts us in a position that is close to how Alibaba started. This will continue for the next five years or so,” Tham says.

Alibaba is a giant in Socialwalk’s industry, once a competitor and trailblazer of sorts. Then, there are smaller start-ups, such as China’s Tradesparq, which Tham says is not a direct competitor as similar ventures try to differentiate themselves in small ways.

“Huge players in the market such as Alibaba bring more benefits to our cause than harm. They educate the market, validate the business model and help create a budget in companies for using Internet-based platforms,” he says.

At the end of the day, Tham knows that Socialwalk is in a longer-term game.

In the next one year, Tham aims to gain a critical mass of about one million members. That, for him, is the key to success.

And the end goal for Socialwalk?

It is to be bought out, says Tham.

“Our end goal is to be acquired because a merger and acquisition would mean that I would be part of a larger organisation and I can add value to international trade,” he says.

How Socialwalk plans to bring in the money

Socialwalk, an online business-matching platform for those in the food and beverage value chain, has been spending plenty of time building up its database.

It currently has about 200,000 members on the platform, which co-founder  Tham Keng Yew describes as “LinkedIn for vendors”.

But that’s not quite good enough for Tham, who wants to see a critical mass of at least one million members from Asia.

“That’s a critical number. It’s enough to claim that we are Southeast Asia’s number one in F&B. But we want Asia, not just Southeast Asia. That’s very hard once you include China, because their players are very, very big. We must be in that one million mark,” he says.

“We are more focused on user growth and user engagement numbers for now. We’ve proven that the network is valuable and can be monetised. We’re doing this because network value is an exponential effect,” he says.

“I believe that having one million members will be worth 20 times more than 200,000 members. There is a certain critical mass that attracts the attention of the larger players in the market.”

Socialwalk is still cash flow negative and is relying on funding from its venture capitalist investors. The company will soon embark on another round of fundraising.

Socialwalk’s main cost component is its frequent participation in exhibitions and tradeshows to get more members from vendors that operate in the different parts of the F&B value chain.

Building a large user base is crucial for Socialwalk’s monetisation strategy and profitability.

It has a free account and a paid option, the latter of which gives users more assistance in business-matching and introductions.

But the number of paid users is still extremely low. According to Tham, there are about 800 paying customers out of the 200,000 in its database. 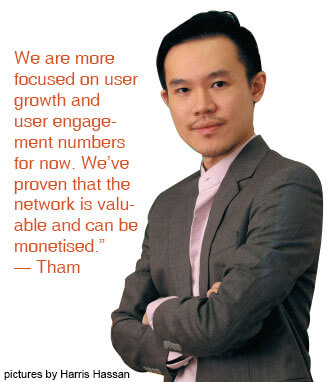 But Tham reveals that Socialwalk has been testing two new paid services that he hopes can be additional revenue streams.

The first is an online magazine with paid advertorials featuring the highly different vendors and products available in the F&B market. The advertorials are priced at US$500. Socialwalk’s second new service is paid advertising on its website.

“This works because we have a unique audience of 200,000 members consisting of the F&B supply chain. We crank out one million page views in a very specific niche and it’s valuable to industry players,” he says.

But Tham concedes that Socialwalk has yet to firm up on its pricing.

“There’s no precedent. The easiest way to set a price is to see what others are doing. What if there is no precedent?

“Now, we try our best to come up with something comparable and that’s why it’s hard, right? It’s not impossible but very, very hard. It means a lot of guessing because you’re the first one there. It’s a lot of trial and error. There’s no formula to it,” Tham says.