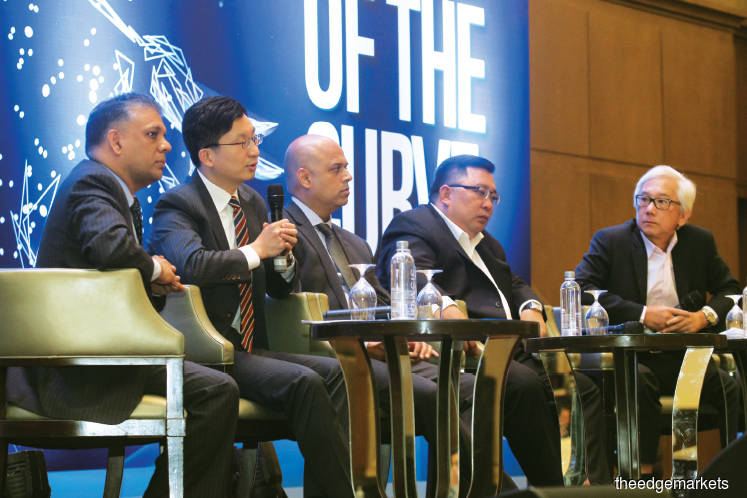 As the global economy enters the late-stage cycle, more volatility is to be expected. What should investors do in such market conditions? The experts at The Edge-Citigold Wealth Forum offer their insights into the financial markets and suggest ways to navigate this challenging environment.

The global economy has entered the late-stage cycle and investors are concerned that a recession will happen this year. They are especially worried about the heightened market volatility caused by geopolitical risks such as the US-China trade war and Brexit.

Against this backdrop, the topic of how investors should preserve and grow their wealth took centre stage at The Edge-

In his opening speech,

Citi Malaysia CEO Lee Lung Nien said political events have dominated the global market in recent years. The outcome of these events are often hard to predict. For instance, the 14th general election on May 9 last year caught many investors by surprise, himself included.

Lee said the need for investors to balance their portfolios and hedge against market uncertainties has increased and the speakers at the forum, who are experts in their respective fields, would be able to provide investors with market views and investing guidance.

In his welcome remarks, The Edge Media Group publisher and group CEO Datuk Ho Kay Tat said major stock markets ended last year with their worst performance since the 2008 global financial crisis. For instance, the S&P 500 finished the year down 6.2% while the Dow Jones Industrial Average closed the year down 5.6%.

The Malaysian market was not spared. The FBM KLCI ended the year down 5.7% at 1,635.31 points despite the historic change in government earlier in the year.

“Many experts tell us that 2019 will be a bearish year for investors. The global economy is expected to see a synchronised slowdown in growth, driven by weaker performance in the major economies of the US, Europe and China. Already, central banks have primed their monetary policy for slower growth, easing fears of a credit crunch,” said Ho.

Despite all these, opportunities will emerge amid the volatility, he added. These events will help investors identify these opportunities and weather the market uncertainties.

During the panel discussion moderated by Ho, Tiwari said he did not foresee the global economy entering into a recession this year as the central banks and governments of the world’s biggest economies have been very responsive to slower economic growth in their respective countries.

“You see that markets were volatile at the end of last year and the central banks responded to it. These act as a cushion that will mitigate the risk of a recession going forward,” he said.

Tiwari recently spoke to officials at some central banks about this topic and they shared similar views. “I asked some central bankers the same question and they did not believe there would be a recession soon. It may be at least two years before we see a recession in the US. Europe could experience it in 2020,” he said.

Franklin Templeton’s Pillai further alleviated investors’ concerns about a recession in the US this year. He pointed out that the country is experiencing its second-longest economic expansion in history and recent numbers, including the Purchasing Managers’ Index and Consumer Sentiment Index, have fallen. While market players are worried that the country’s economic growth is losing steam, Franklin Templeton has an overweight position on US equities.

Pillai’s optimism is partly due to recent indications that the US Federal Reserve will be more data-driven in its decision-making process. The central bank has also said it will be flexible in implementing monetary tightening policies.

“Having said this, I don’t think the Fed has backed off and will turn unexpectedly dovish. It could be using this to buy time to react to the monetary tightening decision,” said Pillai.

China, the world’s second largest economy, has caught the attention of many investors around the world, particularly its property and technology sectors. In this context, Ho posed a question on the country’s property market.

Lu said the most important focus of the property market would be the lower-tier cities (as opposed to first-tier cities such as Shanghai and Beijing). “In the past two to three years, these lower-tier cities have benefited a lot from the social housing programme. Basically, the government demolished some of the houses and handed out cash to residents to buy new houses. As result, household debt has accumulated a lot.

“In recent months, property developers in these lower-tier cities have turned a bit more positive. They expect [market] liquidity to sustain property sales. The sales, however, have not been good so far.”

According to a news report by CNBC last year, real estate accounts for about two-thirds of Chinese household assets and the property market plays a significant role in local government revenues, bank loans and corporate investments.

“For the property market, we are quite cautious on these lower-tier cities. Because of the population trend, there are simply not so many job opportunities in these cities. So, we do see some risks in

When Ho posed the question of whether these companies are deemed “too big to fail”, where the government will step in to provide liquidity if something untoward happens, Lu agreed. “It is true. The property sector in general has contributed a lot to the country’s economic growth. So, the government cannot afford to let it crash.”

However, the Chinese government could mitigate such risks by controlling the market, said Lu. “The government could freeze the market and control transactions, prices and supply. It has control over both lenders and borrowers. It is also able to engineer a soft landing for the property market [if things go wrong].”

Meanwhile, China’s technology companies will find ways to grow even if the US, under the leadership of President Donald Trump, pushes back on their ambition to expand their businesses globally, said Lu.

Over the past few months, the Trump administration has tightened its scrutiny on Chinese firms. On Feb 22, Secretary of State Mike Pompeo announced that the US would stop sharing intelligence with its allies if they use Huawei’s hardware in their core communication systems.

“The central scenario is that Chinese tech companies will face a lot of scepticism overseas. But the domestic market is huge enough for them. These companies are also making friends with emerging markets and could provide them with technologies such as mobile payments and artificial intelligence applications,” said Lu.

From an investment point of view, Citi’s Tiwari said the strength of the pound sterling could rebound as the outcome of the Brexit deal becomes clearer. “The market has been selling the pound since 2016 and it has been very underweight. However, we are now far from the uncertainties of Brexit. We are starting to form the contours of the deal. We are starting to see the crystallisation of views.”

He added that three scenarios could happen. The first is that the UK, while exiting the EU, could make legal changes to allow an “Irish backstop”. In simple terms, it is an insurance policy in the UK — EU negotiations that would make sure the Irish border remains open regardless of the outcome of the ongoing negotiations.

The second scenario is that the UK would decide to join the EU Customs Union and the third is that no deal is reached and negotiations are delayed by another six to nine months.

“However, the no-deal Brexit is most likely off the agenda. If Prime Minister Theresa May does not get a deal, or it is delayed, the UK parliament will likely vote out the no-deal Brexit. As long as this threat is removed, the pound is likely to remain stable or go up,” said Tiwari.

On the home front, Affin Hwang’s Teng said value has emerged in the equity market, including some small-cap property stocks. He pointed out that the share prices of these companies have plunged while their business fundamentals have not changed. “Looking at their price-to-book values, they are at a very deep discount.”

However, Teng cautioned that investors would need to hold these counters for the long term, until the property down cycle is over, which could take a year or two.

“I hope they won’t treat the private sector like the enemy of the state. We are not. We are the contributing set to the entire nation-building. This more socialist mindset that some of the new leaders have should be shed. There are people who are prepared to commit capital and put it to work to develop our nation.”