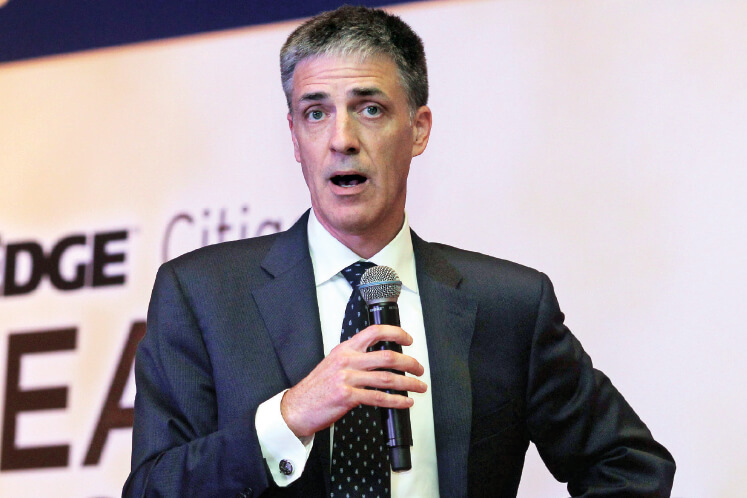 Cloud computing is one of the most exciting opportunities in the market right now. I estimate the opportunity to be worth between US$3 trillion and US$5 trillion over the next 20 years. > Curtis

In his presentation, “Riding the tech wave”, Curtis pointed out that companies in this sector are enjoying significant levels of profitability relative to the other sectors of the US economy. In fact, earnings growth in the tech sector has been accelerating in the last couple of years.

“We believe this acceleration is happening because of the overall digital transformation taking place. Ultimately, companies are becoming more reliant on the very large tech firms to reach their customers and to understand who they are and what matters to them,” he said.

The tech charge is being driven by the mainstream adoption of cloud computing and the efficiency gains it affords companies, said Curtis. “Cloud computing is one of the most exciting opportunities in the market right now. I estimate the opportunity to be worth between US$3 trillion and US$5 trillion over the next 20 years.

“We have companies that produce and deliver processors (upon which cloud storage networks are built and maintained) such as Nvidia Corp. We also have a company called Pure Storage Inc, which builds the kind of high-speed, high-performance cloud storage infrastructure that helps self-driving car companies build the maps they need to upload into their vehicles.”

The leaders in cloud computing include Amazon.com Inc and Alibaba Group Holding Ltd. These companies have made significant inroads into the enterprise markets via their enterprise cloud offerings over the last few years. Amazon Web Services’ revenue run rate is currently more than US$20 billion based on its 4Q2017 revenue of US$5.11 billion.

“Amazon Web Services’ business has accelerated this past quarter. Alibaba is very strong in China and currently enjoys an unfair advantage there, thanks to the restrictions the government has implemented against foreign cloud computing companies that are coming into the country in a big way. Alibaba made roughly US$2 billion in revenue last year and has just turned profitable,” said Curtis.

Curtis thinks Microsoft’s transition from delivering physical copies to customers to an “always on” cloud-based service could be a masterstroke. “With the new cloud computing model, it is playing for the entire US$3 trillion to US$5 trillion cloud computing market opportunity. I believe its market will rise dramatically as it transitions to the cloud. We think it is an excellent business and it makes up a big part of our portfolios,” he said.

The emergence of cloud computing means that organisations have the resources to take advantage of AI and make the most of their customer data and insights. Application software makers are transforming customer relationships from “transactional and data-light” ones to those that are “service-oriented and data-rich”.

According to Curtis, the other compelling prospects in the application software space include ServiceNow Inc — a workflow management software provider that he thinks will be as big as German enterprise software giant SAP SE one day. “We think SalesForce.com Inc is at the tip of the spear in helping legacy businesses transform their relationships with customers to service-oriented, data-rich ones,” he said.

“There is also a company called Workday Inc, which helps businesses understand who their employees are, what their interests and skills are, and what additional learning or training they may need. It is starting to move into the development of financial management software and will be going after the likes of Oracle Corp.”

E-commerce is another very attractive segment of the tech sector. Despite being a global industry that already boasts hundreds of billions of dollars in transactions, Curtis thinks it has barely scratched the surface of consumer demand.

“In the US alone, less than 10% of consumer retail activity is done in some kind of e-commerce format. But even so, 40% of every dollar spent on e-commerce is spent on Amazon. Similarly, in China, less than 20% of retail spend is done via e-commerce platforms and most of that is captured by Alibaba,” he said.

That is why he thinks e-commerce has a long growth story ahead, especially as incumbents such as Amazon and Alibaba continue to add new retail categories to their platforms.

Both Amazon and Alibaba have made tentative first steps to provide an online-to-offline retail service for shoppers, recognising the ability of physical stores to act as last-mile delivery centres as well as to reduce product return rates, encourage repeat purchases and increase average shopper spend. In 2015, Alibaba launched Hema — a fresh produce chain store in China — while Amazon made a US$13 billion acquisition of Whole Foods Market last August.

The latest technological disruptions will hit a number of tech-related sectors hard. So, Curtis advised investors to stay away from IT hardware distributors and manufacturers.

“We are negative on all the enterprise IT hardware companies as we think they will be absolutely killed as customers transition to the cloud. As more workloads migrate to the cloud, companies will shut down their data centres and cease purchasing on-premises server storage infrastructure,” he said.

“We also don’t like the telecommunications equipment space, even though there is some exciting stuff going on with 5G technology. That is because we see Chinese equipment manufacturers such as Huawei move into Western markets and put real downward pressure on prices.”