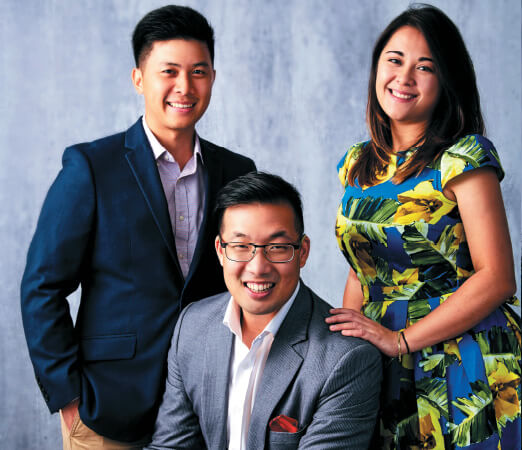 From left: Loh, Oei and Kennedy

It is fashionable these days for big corporations to tout their commitment to improve society by organising large-scale charity events. But the founders of EPIC Homes — John-Son Oei, Jayne Kennedy and Loh Jon Ming — prefer to introduce change at the grassroots level through empowered individuals. The three invigorate the spirit of giving by encouraging people to play a more active role in their communities. They themselves are helping the marginalised and the underprivileged, particularly the Orang Asli, to rebuild their lives, one home at a time.

Established in 2010, the social initiative, which started out as idle talk among friends, has brought change to remote areas in Kuala Kubu Baru, Batang Kali and Gerik, where the Orang Asli lack basic necessities like shelter or a simple latrine.

EPIC Homes, consisting of more than 5,000 volunteers now, has demonstrated that social initiatives today emerge from ordinary citizens scattered far and wide who are taking it upon themselves to effect change.

Terms like “neighbourhood” and “community” may not mean much to the majority of urban dwellers in Malaysia but the founders of EPIC Homes believe that people are naturally benevolent and willing to help one another without reservation if they knew each other better. This explains why they meet village heads and villagers in town hall meetings to get to know the latter’s plight so that their involvement is not dismissed as a come-and-go initiative.

“We encourage our volunteers to not only come back to help but also reach out to communities and look at the issues they’re facing. It’s the personal relationship you establish that will really bring change,” says Kennedy, who is also Oei’s wife.

Buoyed by the initial success of their non-profit movement EPIC Homes that just completed its 100th home in Kampung Orang Asli Serendah, the founders are expanding their social enterprise with new projects and initiatives under its holding organisation EPIC Collective,  which also includes EPIC Communities, a community-driven development arm that engages people to take ownership of their spaces, as well as EPIC DNA, an experiential learning programme that equips people with practical skills to improve their lives.

Oei explains, “The expansion doesn’t mean that we’re diluting our main cause. When we talk about developing people, there are other external circumstances that hold them back from their dreams, apart from shelter.

“Poverty is not just about not having enough money but it is also about emotions. People can’t take responsibility for something if they don’t have the ability to respond to the issues around them. That’s where EPIC DNA comes in — to train ordinary people to do something complex, to satisfy people’s hunger to learn and so on.”

EPIC Homes kicked off with financial backing from the Performance Management and Delivery Unit (Pemandu), through crowdfunding, and private corporations that want to sponsor homes as part of their corporate social responsibility and team building activity. Being a recipient of the inaugural The Edge Inspiring Young Leaders Awards has fuelled the trio to look further afield — as far as Sabah and Sarawak or any place where their social enterprise model can be replicated. They hope to not only solve the housing issue of the Orang Asli community by 2020 but also help them develop safe and sustainable homes.

For Kennedy, winning the award does not mean they can rest on their laurels; rather, it is the opposite. “I think what an award does is that it ensures accountability to the cause you are campaigning for because it puts you in the spotlight and ensures that people know what’s going on. There’s a sense of responsibility that comes with being recognised for the work you do. It’s not just you as an individual but also a huge team that rallies behind you. You’re as strong as the relationships you build.”

She also notes that while there is a trust deficit generally, the award can help mitigate it to some extent. “A lot of people have a sense of distrust ... that we can’t make progress but I believe that by highlighting these figureheads (award winners), we are actually breaking that [perception]. It is a good message to send out to young Malaysians.”

Loh thinks that awards should not be the end goal and that patience will always reward the ones with a tenacity to achieve their ambitions.

Oei, who nods in agreement, shares his thoughts on the team’s triumph, “Getting an award from

The Edge means something because the paper stands for something. It stands for a lot of principles, which is why receiving this award and honour really means a lot. Sometimes, we get caught up with the superficial and chase impressions of success. But a true purpose goes beyond yourself. Engage in something that adds value to someone’s life. If you chase that, success will definitely follow.”