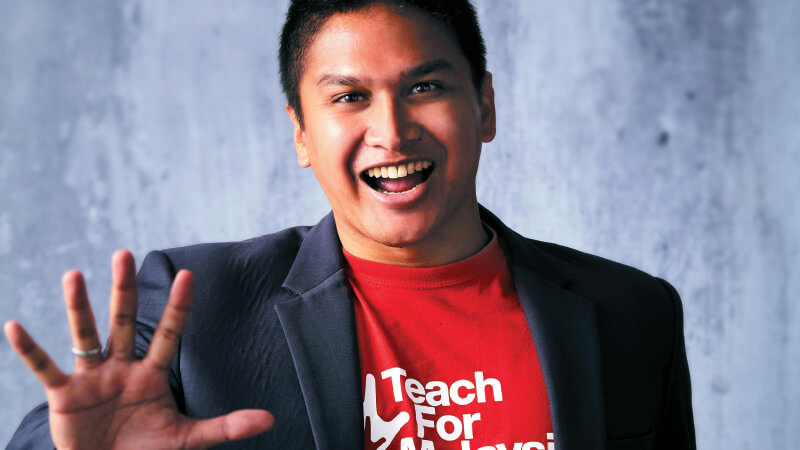 For Dzameer Dzulkifi, it all started with wanting to solve bigger problems than merely carving a career after he graduated with a master’s in mechanical engineering. Inspired by British organisation Teach First’s concept of attracting top talent to the education system as a solution to tackle world problems, he decided — after a two-year stint in management consulting at PwC — to set up Teach For Malaysia (TFM) with a friend, based on similar tenets, in 2009.

Fortuitously for TFM, when it was founded, the confluence of its ideas and plans with those of the government’s Economic Planning Unit and the private sector’s interest in education played a big role in its initial funding.

TFM’s 34-year-old co-founder and managing director says his leadership role was by circumstance rather than choice. “When we were starting TFM, the Ministry of Education had wanted to launch the programme but there was no one to run it. So we decided to give it a go and it just happened from there. I actually just wanted to be a participant.”

Though he says he is not a leader by nature, Dzameer feels his biggest achievement is a learning curve gained from stepping up to build a team while staying true to his vision and values. Work-wise at TFM, his high point is not just finding talented Malaysians to invest two years in teaching in underprivileged schools but also inspiring Malaysian secondary school students — written off due to their

socioeconomic background — and providing them with the opportunity to realise their full potential.

He relates the success story of how seven TFM students won 7 out of 10 places to study programming in Silicon Valley in a Malaysian digital economy competition. Dzameer is particularly proud of a TFM student — from Klang’s urban poor demographic, who was working part-time in a restaurant, earning RM5 a day, and who scored only 2As in Form 4 — who scored 5As and a CGPA of 3.75 in STPM after much engagement with TFM fellows and alumni. The student is now on a full scholarship, pursuing finance and accounting.

“Often, students in underprivileged communities lack the faith to believe in themselves. So, how do we plant the first seed that they are powerful beyond their imagination? And how do we get them to unleash their potential?” he asks.

Dzameer considers his work at TFM to be a privilege as he realises that not many people have the opportunity to do what they truly love while impacting society. His example in leading change through education inspires not only his

Gen Y peers but across the board as well. It is for his role as a visionary leader and frontline facilitator at TFM that he was named a winner of The Edge Inspiring Young Leaders Awards 2017.

“It is really an honour as it is the first award given by The Edge that recognises non-financial excellence,” he says. “If you think of any form of economic growth, the foundation is almost non-financial in nature. It is mainly down to capital, land or resources. Resources of talent is becoming a much more valuable commodity.”

Over the last six years, TFM has recruited 300 young Malaysians and created an impact that has benefited up to 70,000 students. “We’re hoping to expand that number of fellows to at least 1,000 or even 2,000 to reach 250,000 to 500,000 students. It’s a scale problem we are facing,” he says of TFM’s future plans. “We don’t have enough leaders on the ground creating change for students. We have enough teachers who are good at delivering knowledge-based subjects but children growing up in a low socioeconomic environment need a different type of leader to inspire and motivate them to think beyond anything they can imagine.”

Dzameer’s vision of TFM extends beyond recruitment of fellows; more importantly, it is to accelerate both student and system impact. How this change is achieved is through a bottom-up effect that takes place not only within the fellows’ contractual two years of impacting students but also through what happens after those two years and the fellows have witnessed how change is possible. “About 78% of our alumni decide to continue in the education and social sector. Our alumni are working on a broad range of things that we haven’t even thought of as solutions. That’s how we want to drive change — by empowering our fellows, alumni and students to come up with solutions for themselves.

“In fact, I am on a journey to understand what empowerment means as well. I am always asking if my actions are empowering my team fellows, alumni and the students we reach.”

Dzameer says fundraising remains a crucial component of the TFM equation to realise all its plans. Apart from the financial support received from the government and various corporations and foundations, TFM is launching an individual donation drive. Every RM50 per month donated by an individual — enough to support two students — will be matched by a corporate partner for 12 months. He opines that the current education system is designed to develop talent only for economic purposes and not as change leaders and nation builders. “It’s not all about As and how many answers you get correct but how to learn from failure. We’re not even using the

11 years in school to teach the students this basic fundamental of life,” he says, reiterating that the education system needs to be reformed to truly empower the country’s future generations.

Urging young Malaysians to rise up to solve problems they see around them and not be afraid to fail, Dzameer says: “Don’t be afraid to dream your craziest dream. It is only in setting ambitious goals that we find ways to change the world.”