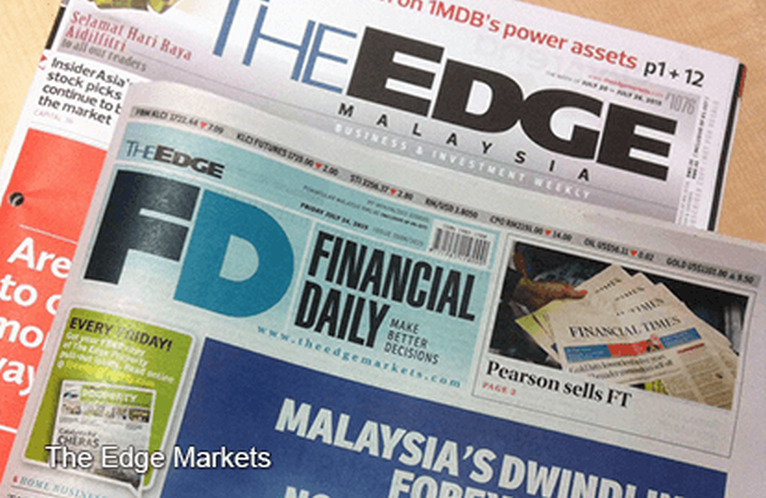 KUALA LUMPUR (June 13): The Edge Communications Sdn Bhd is entitled to aggravated, exemplary and constitutional damages over the suspension of its daily and weekly publications for three months beginning July 27, 2015, following its reports about 1Malaysia Development Bhd, said a lawyer representing the company.

Lawyer Raja Eileen Soraya Raja Aman told the High Court today that the publication is entitled to those damages which will be assessed by this court, after the Federal Court did not disturb the finding by dismissing the appeal of the Home Ministry and Government.

“Hence, we submit that the publication's entitlement for these damages had already been crossed (passed). Liability has been established against the Government (for its actions) and now the right to assess the damages should be done,” said the lawyer in the publication's appeal.

Raja Eileen also said that the publication is entitled to constitutional damages due to violations done by the Ministry by unreasonably ordering its suspension without giving proper reasons, as this amounts to an illegality and impropriety of its actions.

The Edge is appealing after the High Court deputy registrar awarded a total of RM11.26 million in damages for loss of revenue to the publication following the three-month suspension which was ruled as unlawful.

The Ministry and Government is also cross-appealing the quantum and the right for the company to be awarded the damages.

Raja Eileen said this court should not give the Government a chance to revisit the issue on whether to grant the damages as the High Court had ruled that damages was to be assessed and this decision was upheld by the Court of Appeal and the Federal Court.

She added there must be consistency in the court's decision and it would be wrong for it to rule otherwise.

Raja Eileen also said they had also shown that the Ministry's order to issue the suspension was reckless as it had complained about articles pertaining to 1MBD — which number over 300 — but the Government decided to suspend the two publications.

“The response by the then Minister [Datuk Seri Ahmad Zahid Hamidi] has been indifferent and hence there is full of illegality. Hence, the order to assess the damages should stand.”

Raja Eileen said the courts found the Home Ministry and Government to have acted unconstitutionally, hence there is a strong argument for exemplary, aggravated and constitutional damages to be awarded.

“There is also a finding that the respondent acted without authority [in suspending the publication]. Therefore, these findings are not mere allegation but [has been ruled by a court of law] that there is a finding. The exemplary damages should be given as it is punitive and ensures that public officials are always guarded in their actions,” she said.

Raja Eileen said aggravated damages are allowed as compensation when proof of malice is found it the defendants’ action.

“Hence, there should be some constitutional compensation to be considered by this court following the Government's decision to order the suspension which the High Court and the other superior courts had ruled illegal,” she said.

It was previously reported that on July 2015, the Government sought to suspend the publication permits of The Edge Malaysia weekly and The Edge Financial Daily for three months following their reports on 1MDB which it deemed to be “prejudicial or likely to be prejudicial to public order, security or likely to alarm public opinion”.

The Edge, on July 27, 2015, sought an order from the court to reject the suspension of the two publications’ permits. The High Court had on Sept 25, 2015, quashed the suspension order and allowed the publication's judicial review application.

On Aug 30, 2016, the Court of Appeal dismissed the Home Ministry’s appeal against the High Court’s order for assessment of damages.

Following the decision, the matter was remitted to the High Court for damages to be assessed.

However, senior federal counsel Alice Loke who represented the Ministry and Government told the court that the publication is not entitled to the damages as the Federal Court did not rule that damages should be assessed and hence, the Court of Appeal decision stands.

“We are not revisiting the previous proceeding in the Federal Court. This is the threshold issue [the awarding of damages]. The Court of Appeal decision was to confirm the entitlement of damages. You should go back to the assessing [trial] judge,” she added.

“What we sought in the Federal Court was a determination whether [there was] an order for an assessment of damages but there was no such ruling made,” she added.

Loke further explained that The Edge Communications is a company and not an individual, and hence it was not entitled to get the aggravated and exemplary damages.

“For this reason, the Ministry and Government's appeal should be allowed,” she said.

Justice Datuk Nordin Hassan has fixed 2.30pm on July 30 to deliver his decision as he needed time to consider the various case laws given by both parties.