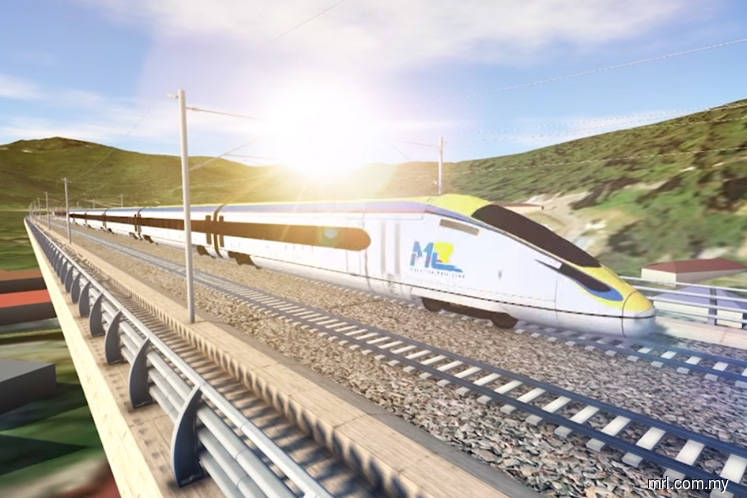 THE historic change in Malaysia’s federal government has turned the spotlight back on some mega projects, including the RM55 billion East Coast Rail Line (ECRL).

A closer study of the rail project may unearth some interesting names that can be traced back to the 1Malaysia Development Bhd (1MDB) scandal that felled the previous ruling coalition.

One of the names is Datuk Koay Teng Keong, who is understood to be the Malaysian adviser to China Communications Construction Co Ltd (CCCC), the Chinese contractor undertaking the rail project.

The 61-year-old is a veteran construction industry executive who was, among others, an executive director at Gadang Holdings Bhd between 1997 and 2009. His years in the industry go back to the early 1980s.

It is worth noting that Koay is also father-in-law to Jerome Lee Tak Loong, who was at one time an investment director at 1MDB. Sources confirm that Lee was occasionally seen around the Malaysia Rail Link Sdn Bhd (MRL) office near Jalan Duta, although it was unclear what he was doing there.

Contractors bidding for ECRL jobs have also said that they have held meetings with Lee, who is said to be an associate of Jho Low or Low Taek Jho, at the office of MRL where he told them that they needed to go through him if they wanted to get work.

MRL is a special purpose vehicle set up by the Minister of Finance Inc to manage the rail project.

Last month, when asked about the role of these two men in the project, MRL said: “Both are not employees or directors of MRL previously or currently.”

At the time of writing, CCCC had not responded to questions emailed by The Edge. This newspaper also wrote to Koay’s personal email address but did not hear back from him.

In November 2014, MACC charged Koay and another businessman, Teh Yean Teong, with two counts of making false claims that amounted to RM1.1 million back in March 2010.

According to MACC’s statement on the charges, at the time of the alleged offences, Koay was managing director of Gadang Engineering (M) Sdn Bhd, a Gadang Holdings subsidiary.

The charges alleged that Koay had induced Gadang to issue two invoices for RM605,200 and RM511,400 each to Teh’s transport company Deutsche Direct Sdn Bhd.

The first invoice was for the import of 200 tipper trucks while the second was for modification and mechanical works on the trucks.

Koay and Teh claimed trial but the current status of the case is unclear.

Among other roles, Lee was a non-executive board member of now privately held Putrajaya Perdana Bhd (PPB).

Cendana Destini Sdn Bhd is the majority shareholder of PPB with a 70% stake. The remaining 30% is held by pilgrims fund Lembaga Tabung Haji based on RAM Ratings data.

To recap, Lee was remanded by MACC along with a few others in July 2015. At the time, MACC was investigating the flow of RM42 million from the then 1MDB subsidiary SRC International Bhd into the accounts of a senior political figure.

Lee, who was represented by lawyer Tan Sri Muhamed Shafee Abdullah, was released after being on remand for four days.

Shortly after, the MACC probe was halted abruptly after the then Attorney-General Tan Sri Gani Patail was sacked. MACC head Tan Sri Abu Kassim and his deputy, Datuk Seri Mohd Shukri Abdul, who was leading the investigations, were also removed.

With the situation now reversed, the new government under Pakatan Harapan last week announced the appointment of Mohd Shukri as the boss of MACC following the resignation of Tan Sri Dzulkifli Ahmad who was appointed by the now ousted prime minister Datuk Seri Najib Razak.

MACC did not respond to emailed questions on the status of the cases against Koay and Lee.

Interestingly, PPB’s current managing director is Datuk Rosman Abdullah, a major shareholder of Cendana Destini. Rosman was also among those arrested by MACC in the 1MDB fallout back in July 2015.

The 688km ECRL will link Gombak in Selangor all the way to Pengkalan Kubor in Kelantan near the border with Thailand.

In September last year, The Edge reported that the overall cost of the rail project could balloon as the RM55 billion price tag was for a single-track alignment.

In March this year, the then minister in the Prime Minister’s Department, Datuk Seri Abdul Rahman Dahlan, stated that the government was looking into double-tracking the project pending a study by the Land Public Transport Commission (SPAD).

“Results of the study will be announced soon. Of course, we are looking into costs, and earlier we had looked into speed, security and safety,” he was reported as saying on March 22.

The Edge understands that the current contract does not allow CCCC to claim additional costs incurred from design changes and so on. This means the double-tracking change may wipe out CCCC’s margins as it may add as much as RM10 billion to costs.

Therefore, should double-tracking be pursued, it would entail a separate contract on top of the existing agreement with CCCC.

Already, public engagements in recent months have resulted in some changes to the alignment and design, piling on the pressure on margins. The Edge understands that the number of tunnels in the design have almost doubled to 40 from the previous 19.