THE PRIVATE SECTOR has been the primary driver of funds raised by the capital market, according to the Economic Report 2014/2015.

The report says net funds raised in the capital market grew by a significant 95.7% to RM65.8 billion in the first seven months of the year, compared with RM33.6 billion in the same period last year — contributed mostly by the private sector.

“The bulk of the funds raised were from the construction as well as insurance, real estate and business services sectors, which accounted for RM37.3 billion or 77.6% of new private debt securities.”

The balance of net funds raised came from the public sector through the issuances of Malaysian Government Securities, Government Investment Issues and Government Housing Sukuk.

In the equity market, funds raised rebounded 73.3% to RM14.7 billion in the first seven months of the year, supported by higher initial public offerings and rights issuances valued at RM4.9 billion and RM9.7 billion respectively.

The equity market performed “relatively well” in the first seven months of the year, despite a challenging external environment. The FBM KLCI started the year on weak investor sentiment, but managed to hit three record highs.

In May, bolstered by strong first quarter gross domestic product growth and positive US data, the FBM KLCI reached a record high of 1,887.07 points. A new high of 1,892.33 points was reached again in June, when the US Federal Reserve renewed its commitment to maintain low interest rates.

In July, the benchmark index breached another new high of 1,892.65 points, amid optimism as the International Monetary Fund forecast an acceleration in global economic growth.

“In September, the FBM KLCI continues to decline due to lack of positive market leads and quiet regional trade. Disappointing domestic trade data, weaker-than-expected industrial production, poor corporate earnings coupled with concerns over US interest hikes and intensified geopolitical risks following US airstrikes in Iraq and Syria had combined to weigh down the market,” the report says.

During the first seven months of the year, 10 new companies were listed on the market, bringing the total number of companies listed on Bursa Malaysia to 907.

The unit trust industry launched five new funds in the first seven months of the year, bringing the total to 600 funds. Total units in circulation rose 9.5% to 407.4 billion units, while the number of accounts declined 3.2% to 16 million.

Equity funds were the most preferred funds by investors, with net sales of RM15.9 billion, followed by mixed asset funds at RM800 million for the first seven months of the year. During the same period, wholesale funds saw an addition of 28 funds to 221 and a higher net asset value (NAV) of RM64.3 billion.

The real estate investment trust industry continued to grow during the first seven months, with a total of 16 REITS listed on Bursa. As at end-June, the market capitalisation increased to RM34.1 billion, while the total NAV stood at RM28.1 billion.

As for the Islamic capital market, 664 shariah-compliant securities were listed on Bursa as at end-July, representing 73.2% of the total market capitalisation. 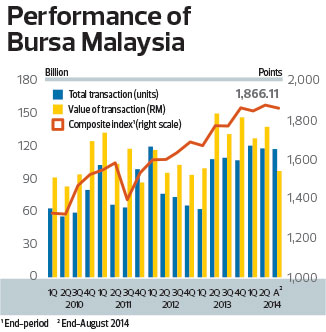 Looking ahead, the report says the emerging and developing economies are projected to continue to drive global growth next year.

“Growth in the Malaysian economy is expected to remain steady at between 5% and 6%, underpinned by resilient domestic demand and higher exports,” it says.

“However the spillover and contagion effects from the continued monetary policy normalisation in the US may still impact emerging and developing economies.”