MONETARY POLICY this year is focused on supporting the sustainable growth of the economy while mitigating potential vulnerabilities arising from financial imbalances, according to the Economic Report 2014/2015.

With firm growth prospects and inflation expected to remain above the long-run average, Bank Negara Malaysia raised the overnight policy rate (OPR) by 25 basis points to 3.25% in July. It was the first time the OPR was raised since May 5, 2011.

“At the new level of the OPR, the monetary policy stance remains supportive of economic activities,” the report says.

The report says this was due to the impact of upward adjustments in the price of fuel, sugar and electricity since September last year and at the beginning of this year.

Following the adjustment of the OPR, interest rates in the banking system were also raised. The base lending rate of commercial banks increased to 6.78% at end-July 2014 from 6.53% as at end-2013. It was the first adjustment of the rate since December 2011.

Likewise, the weighted average lending rate of commercial banks increased by 13 basis points to 5.49% from 5.36% as at end-2013, while the interest rates on savings deposits went up by eight basis points to 1.07% from 0.99%.

Monetary aggregates grew further in the first seven months of this year with M1, or narrow money, rising 9.1% to RM331.9 billion as at end-July, mainly due to the increase in demand deposits.

M3, or broad money, increased at a slower rate of 5.7% to RM1.5 trillion, on account of the expansion in bank lending to the private sector.

Narrow money includes all physical money like coins and currency, along with demand deposits and other liquid assets held by the central bank. Broad money, on the other hand, includes liquid instruments as well as some less liquid instruments, and is considered the broadest measurement of money. 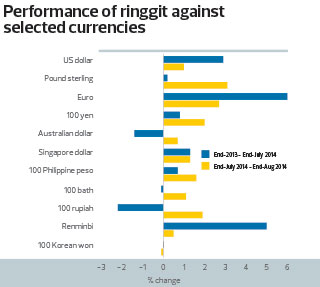 On the ringgit, the report says the currency initially depreciated before strengthening for most of the period between January and August this year. The ringgit was the best performer among 24 emerging market currencies due to strong GDP growth in the second quarter.

In September, the ringgit depreciated 3.5% against the US dollar and posted a mixed performance against other currencies.