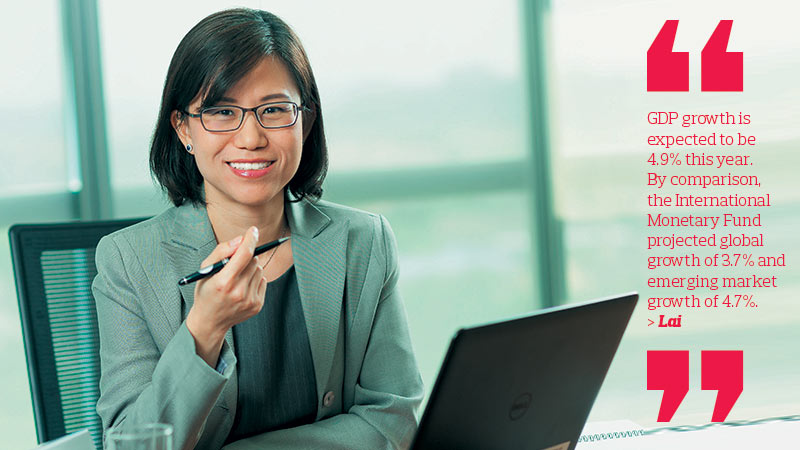 GDP growth is expected to be 4.9% this year. By comparison, the International Monetary Fund projected global growth of 3.7% and emerging market growth of 4.7%. > Lai

RAM Rating Services Bhd has maintained its gA2 sovereign rating for Malaysia following the unveiling of Budget 2019 despite the higher-than-expected fiscal deficit as well as higher debt level.

Head of sovereign ratings Esther Lai attributes this to the firm’s projections of Malaysia’s economic growth rate next year, which is above those of other emerging markets. “GDP growth is expected to be 4.9% this year. By comparison, the International Monetary Fund projected global growth of 3.7% and emerging market growth of 4.7%,” she says.

The growth rate also tops the median growth rate of other gA2-rated countries, which stands at 1.4%. “We still have an excellent growth story to sell and it helps to anchor the stability of Malaysia’s sovereign rating,” says Lai.

Malaysia’s economic growth next year is expected to be 4.5% to 5%, she adds. “However, after the budget announcement, we expect growth to be in the mid to higher end of that range. The growth side is expected to hold up well.”

The better growth outlook next year is partly reinforced by the government’s targeted initiatives to support the bottom 40% of the population (B40 group) and advance financial inclusion. These initiatives include an increase in household electricity subsidy, fuel subsidy, minimum wage and the exemption of stamp duty for properties priced between RM300,000 and RM1 million for first-time homebuyers.

There are also initiatives that will support and grow small and medium enterprises such as the RM5 billion allocation to drive the country towards adopting the Fourth Industrial Revolution (Industry 4.0). “These are targeted initiatives and the government is to get the biggest bang for its buck amid revenue constraints,” says Lai.

She adds that the continuous growth of the country contributes to the firm’s stable outlook on its sovereign rating despite the budget deficit. Also, Malaysia scores well on external resilience (referring to the ability of a country to adjust and recover from external economic shocks) within the Southeast Asian context.

She adds that the country’s current account surplus is based on a fairly diversified economy that no longer relies on just oil and gas but also electric and electronic products and manufactured goods. “The country was still experiencing a surplus from 2014 to 2016 when oil prices plunged.”

Malaysia’s capital accounts, on the other hand, mainly comprises foreign direct investments (FDIs) that are long term as opposed to portfolio investments. “If you look at the split, we are heavier on FDI as opposed to portfolio [investments]. This compares with Indonesia, which has more portfolio flows and is more susceptible when there is global risk aversion and investors pull out their funds. It also shows that we do not rely on short-term capital [to fund the nation],” says Lai.

But not everything is rosy. Lai is concerned about the increasing debt service charge-to-revenue ratio disclosed in the budget. The higher the ratio, the less the government has for other types of expenditure. The ratio increases when the revenue received by the government fails to catch up with the increasing level of debt and interest it has to serve.

She points out that the debt service charge-to-revenue ratio, excluding the Petronas special dividend, will increase to 14.2% next year from 8% in 2008 while the revenue-to-GDP ratio will decline to 15.1% from 20.8% in 2008 and the debt-to-GDP ratio will rise to 50.8% from 39.8% in 2008. This means the government’s revenue has been declining while debt levels have risen.

In fact, the debt service charge-to-revenue ratio of 14.2% is understated. “The government had been doing off-balance sheet funding to fund the country’s infrastructure projects. The cost to service the interest of these [off-balance sheet] debts is not reflected in the ratio,” says Lai.

She says the combination of high debt and declining revenue has a potential negative impact on the country’s sovereign rating. But compared with Singapore and Thailand, there is room for improvement.

Lai says the budget announcement shows that the government is relying more on the oil and gas sector to generate revenue. This is reflected by the RM30 billion special dividend to be paid by Petroliam Nasional Bhd to the government.

“The fiscal orientation going forward will be dictated by the oil price. And there is always the risk of falling oil prices causing the deficit to increase,” she adds.

The risk is real as the US is already increasing its oil production, which could cause prices to fall, says Lai. In addition, some of the government’s initiatives to reduce its fiscal deficit may be challenging to achieve.

For instance, emolument spending — which comprises salaries, various allowances and financial benefits for civil servants — is expected to increase 0.9% in January next year. This could be the lowest increase in the country’s history, says Lai.

“I have not seen this level of increase in emolument spending before. The lowest I have seen was a 1.6% year-on-year increase,” she adds.

“I am not sure whether the government will pay the civil servants a bonus next year. There have always been bonus payments to them.”

Lai says the government also plans to cut 20% of its supply and services expenditure. This expenditure is made when, for instance, the government purchases stationery or engages advertising companies. “I know it has been tightening up a lot. However, a 20% cut is quite drastic,” she adds.

On top of reducing the debt level, the government should find ways to generate sustainable revenue that is less affected by economic and commodity cycles, says Lai. “Yes, the government is finding ways to generate sustainable revenue, but it is not doing enough. Revenue contribution, such as the special dividend from Petronas, is meant to be a one-off thing.”

There are several ways to generate sustainable revenue, she adds. Introducing a tax on deposits is one example. Under such a move, a person’s interest income, which is generated from bank deposits, will be taxed before it is credited into his or her bank account.

“This measure is implemented by countries such as Thailand, Indonesia and Australia. It is a quick fix as Malaysians are highly banked. However, it would be a very unpopular measure and the implications need to be studied carefully before it can be introduced,” says Lai.

A carbon tax is another example, she says. Under such a move, a company that releases a certain amount of carbon units that exceeds the threshold set by the government will need to pay tax.

“Singapore has announced its intention to implement such tax measures. This could be something the government can implement going forward. We only tax below the ground. We should also be taxing the air. It is also part of the environment,” says Lai.

However, the government has shown its prudence through some of the announcements in the budget, she says. This attitude, if maintained, will help the government drive the country in the right direction.

“For instance, the government did not take into account the RM4 billion it could get through selling the 30% airport real estate investment trust [when projecting future revenue]. It also did not include the potential revenue that could be generated by the tax amnesty programme. This shows that the government is prudent, which is good,” says Lai.

Budget 2019 included a voluntary disclosure programme, which allows taxpayers who disclose their unreported income from Nov 3 to June 30, 2019, to receive a reduced penalty rate. This initiative is deemed a tax-exemption programme introduced by the government. “Thus, any revenue the government gets from such initiatives will be a windfall,” says Lai.