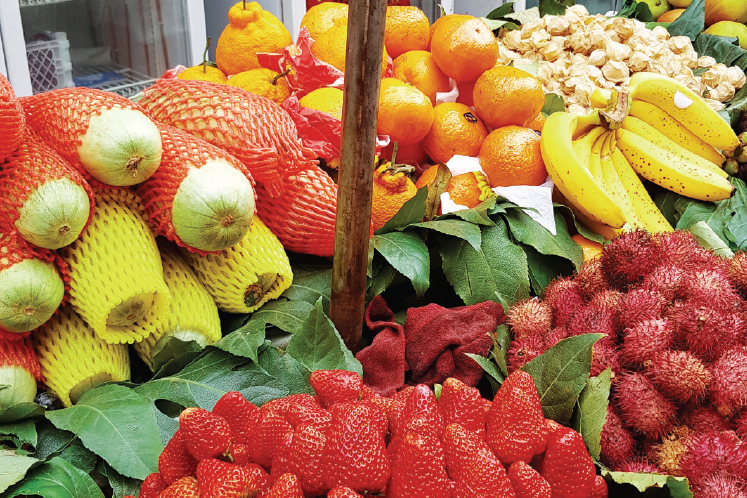 In China, which used to be classified as a Second World country, customers use e-wallets to pay for their fruit at open market stalls

The first question could be considered a condescending one, especially for Asians. During the Cold War, the world was divided into three categories — more political than economic — for 45 years, from 1947 to 1992.

The First World was composed of nations that were part of the US-led Nato. The Second World comprised countries aligned with the former Soviet Union. And the Third World consisted of states from Asia, Africa and Latin America that were pitiably called LDCs (less developed countries). With the fall of the Soviet Union at end-1991, LDCs were categorised by two more politically correct terms — “developing countries” or “emerging economies”.

The second question is more recent — and more relevant — for this column. In a digitally-driven world, it is no longer about which political or economic bloc you are aligned with. Instead, it is more about the general state of digital readiness that your country or company is in. That is where the third platform concept comes in.

It was first mooted by IDC Corp. The first platform began in the late 1950s with the birth of the mainframe, led by giant IBM Corp and the “Seven Dwarfs” — Burroughs, Honeywell, Control Data Corp, General Electric, Univac, RCA and NCR.

The second platform saw the rise of client/server computing in the mid-1980s that led to the birth of personal computers and the internet. They also tapped into the mainframe’s databases, applications and communications.

The third platform is what is available in the current time with a jumble of devices (desktops, laptops, tablets and smartphones), a medley of interfaces (corporate, social, mobile, cloud and analytics) and a surfeit of data (coming from computers, phones, robots, industrial machinery and the Internet of Things). “The third platform is based on online — or cloud — computing and its interaction with all manner of devices, including wirelessly connected ones such as smartphones, machinery and sensors, known collectively as IoT,” The Economist noted in 2016.

The new “developing countries” in Asia are changing the global dynamics on the digital front. “The mix of trade is changing in a digital world. Even as goods trade slows down, there is an increase in services trade and cross-border data flows,” says Sangeet Paul Choudary, an INSEAD entrepreneur-in-residence.

“Digital technologies allow product-based business models to morph into service-based ones. For example, companies such as General Electric and Siemens are increasingly switching from selling equipment to delivering data services, including predictive equipment maintenance and usage-based leasing.”

Choudary, who founded and runs Platformation Labs, says digital platforms have enabled small and medium enterprises (SMEs) to participate in global trade without investing in their own supply chains. “Alibaba, for example, enables a significant portion of SME trade and has now moved into financing these SMEs in China,” he points out in a blog post.

“Amazon and WeChat have similar ambitions. As these platforms get bigger and benefit from winner-take-all scenarios, we may see control points over trade shifting from political countries to digital platforms.”

Is Malaysia a developing country? While many would count it one of the four Southeast Asian Tigers in the developed world category, it still has some way to go. Malaysia can be a developed nation by 2025 if it can master manufacturing and new technology, Prime Minister Tun Dr Mahathir Mohamad said in a TV interview last October. “We still want to be a developed nation and that comes with certain criteria. To do this, we must achieve certain growth rates.”

A developed nation is not just measured by income per capita. Malaysia needed to master manufacturing and focus on a knowledge-based economy, said the prime minister.

One metric? Smart services in a connected city. In 2017, Europe-based EasyPark Group — which offers smart car parking services in 600 cities — unveiled its Global Smart Cities Index, in which it had included Kuala Lumpur as one of the world’s 100 smart cities.

The study analysed 500 cities and ranked the top 100. “To round off the study, we asked 20,000 technology and urban planning journalists for their expert opinion on how the cities where they have lived are moving with the curve of digitalisation,” said the firm.

The top six smartest cities? Copenhagen, Singapore, Stockholm, Zurich, Boston and Tokyo — in that order. Taipei was ranked No 57, Hong Kong No 68, Beijing No 81, Kuala Lumpur No 84 and Shanghai No 85.

“Big data has changed the face of the world as we know it because it allows us to create better solutions to real-world problems,” said EasyPark Group chief big data officer Mauritz Börjeson.

“Every city in this index deserves to be applauded for its efforts. While the results indicate that those cities are leaps and bounds ahead, it brings to attention the admirable efforts of many cities looking forward to a smart future.”

Another indicator of digital prowess? Cutting-edge mobile tech such as 5G.

How big is the potential market for 5G in Malaysia? According to the statistics from the Malaysian Communications and Multimedia Commission (MCMC), the country has about 24.5 million internet users, which is about 77% of the population. The main medium of internet access in Malaysia is the smartphone: 22 million people access the internet via their smartphone. That is a good 89% of all internet users in the country.

“Rapid change happens due to rapid advances in technology. This means silos start breaking down and technologies could be combined and recombined to create new value at a much faster pace than before,” says IDC.

“Expanding use cases come about as new technologies are used in unique ways due to a rapid expansion in mobile devices and users. And Data-as-a-service is creating new ways for data to be utilised and monetised.”

And finally, the proliferation of mobile devices offers access to information and services to all strata of society. Here are two examples. For companies, busy salespersons get instant access to relevant data on their mobile devices whenever and wherever they need it. For students, a tablet computer could be used to access lectures, notes, carry out assignments and offer virtual classrooms 24/7.

What makes this possible? The generic platform called cloud computing is where any application is available anywhere, anytime, on any device, as long as the device is connected to the internet. “Cloud services are at the heart of the third platform. Having big data and mobile devices is one thing. But without the cloud, there will be no way to access this data from outside of the office,” says IDC.

McKinsey says a handful of industry leaders, such as Ping An and BMW, are joining their ranks by reinventing their core business around data and digital. “What distinguishes these tech companies is that their technology allows them to move faster, more flexibly and at greater scale than their competitors. IT is not a cumbersome estate that gets in the way, but an enabler and driver of continuous innovation and adaptation.”

The reason this is a competitive advantage for tech companies is because their IT is organised around a set of modular platforms. Each platform consists of a logical cluster of activities and associated technology that delivers on a specific business goal and can therefore be run as a business, or “as a service”, as technologists say.

These platforms are each managed individually, can be swapped in and out and, when “assembled,” form the backbone of a company’s technology capability. Just as important is that the business and tech sides of the company work closely together and have the decision-making authority to move quickly.

The bottom line: Are Asian economies still considered Third World countries? It depends on one’s perspective. The late Mao Zedong had his own “Three Worlds Theory”, which differed from the Western definition.

The prognosis for the Third World, therefore, lies not in blindly following the West in unsustainable development, but in how fast it adapts and implements the tsunami of the third platform.