E-commerce: A marketplace for home-cooked meals 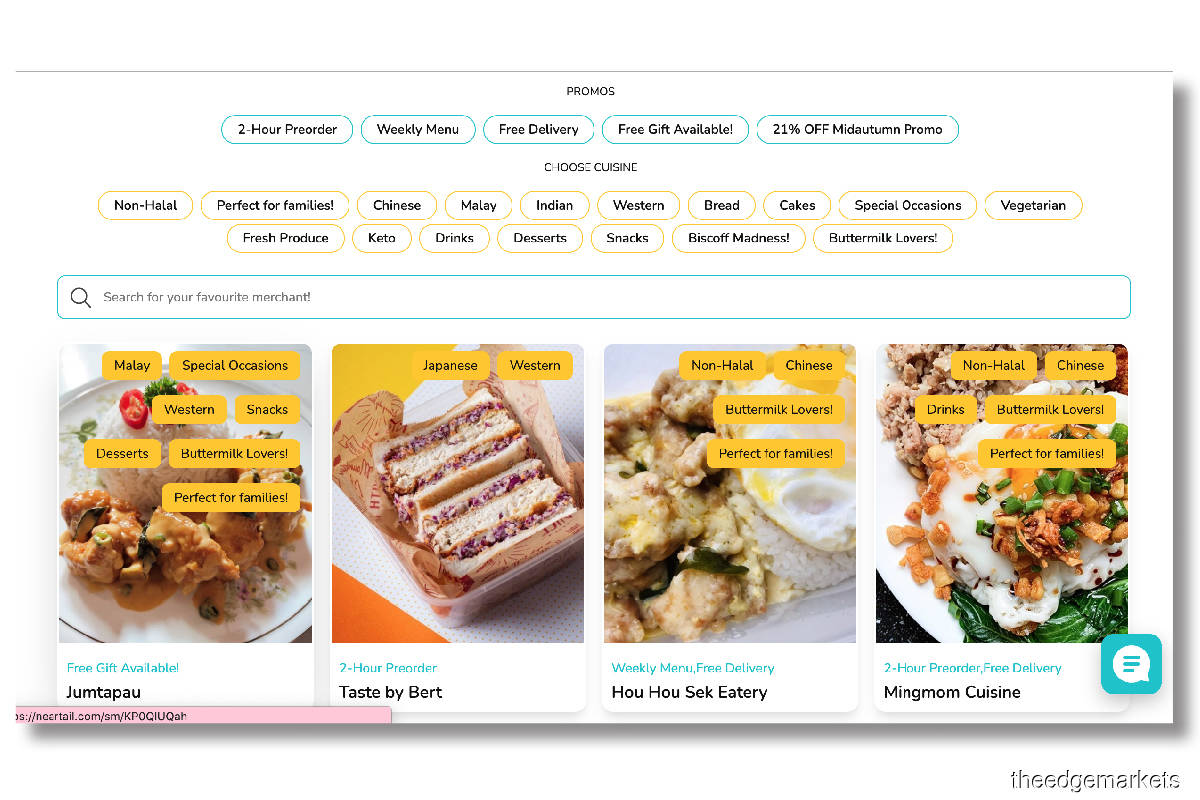 Starting a culinary business requires time, investment and a certain level of financial acumen to make the venture a successful one. This makes it nearly impossible for home-based cooks to realise their dream of establishing their own restaurant someday.

But the explosive growth of the homemade food economy has opened up an avenue for anyone with a love of cooking to start selling food on their terms with minimal risk and start-up capital, says Tan Liyen, co-founder and CEO of Hawkr.

Hawkr is a food delivery platform that specialises in highly customisable homemade meals and desserts, providing home cooks and bakers with an avenue to share their food with people outside their immediate network.

“Home cooking and home baking businesses are facing an uphill battle when it comes to running a business with ease at home due to a lack of resources and time. Many talented home cooks and home bakers also have other responsibilities such as being a parent, attending school, working another job and more,” says Tan. “[All this] adds to the strain of having fewer resources and less time compared with someone who is working professionally in the food and beverage (F&B) industry. On top of that, if home cooks and home bakers were to start their own business at home, they would be forced to compete with established restaurants, bakeries, popular street vendors and large hawker centres.”

But every time she explains the uphill battle home-based food entrepreneurs face, often comes the retort that the latter should just start a business if they are truly passionate and let the market forces decide on their fate. “Well, they can’t, and they should not have to do so,” she asserts.

In 2020, Tan, who had just graduated with a degree in economics from the University of California San Diego, started Hawkr primarily to remove the barrier preventing home-based cooks from starting their venture.

Her dream of pursuing a career in Silicon Valley and a life in the US abruptly ended after her job offer was rescinded following the coronavirus outbreak. In need of a career Plan B, she turned to her passion for cooking and started selling home-cooked food online.

While the response was promising and she gained some valuable experience through the venture, Tan realised she would not be able to scale up the business with the legal constraints involved in selling homemade food in the US.

It was then that she changed her plan and turned her focus to building a tech start-up in Malaysia instead. She set up the team here, including recruiting the co-founder and chief operating officer, a former flight attendant, who could handle the logistics and deal with customer complaints.

Hawkr aims to empower budding home cooks and bakers to successfully set up and grow their own micro-kitchen business through the provision of services such as brand logo design, menu layout, pricing strategy and 24/7 merchant and customer service support. Such services are crucial to its merchants as about 40% of them are newcomers with no prior food industry experience, says Tan.

“No one should be required to invest such a hefty amount to start a restaurant or any physical location, which not only requires money but also time. Not everyone can afford to take such huge risks as well,” says the 25-year-old.

“Hawkr is designed for home businesses because we provide services and platform features that directly tackle the two main challenges faced by home cooks and home bakers.

“What is perhaps more important is that our platform is committed to making sure home businesses can scale and compete with physical stores. This means some of our home cooks and home bakers are operating at a capacity that only professionals are capable of.”

According to Tan, some of the sellers on the platform make up to RM20,000 a month, considering that they do not have expensive overheads such as rent, equipment and labour. “We also have part-time sellers who make up to RM8,000 a month despite only operating on weekends,” she tells Digital Edge.

“Our vision is to create economic empowerment on a massive scale and we are here to say that no matter how big or small your goals and aspirations are, we are here to be your partners.”

Despite having been in business for two years now, Hawkr has already received venture capital investment. Singapore-based venture capital and private equity firm Iterative, which provides seed-stage funding for early-stage start-ups mostly in Southeast Asia, has invested US$150,000 for a 10% stake in Hawkr, which values the company at US$1.5 million.

Hawkr is currently serving the Klang Valley and Penang markets, with more than 150 merchants on board. Plans are underway to expand to a few more states, including Johor and Melaka, soon. It may also venture into Singapore at some point, depending on the Covid-19 situation and market conditions, says Tan.

“One of the investors from the venture capital firm reached out to me via LinkedIn with a very quirky and interesting message. He said, ‘Hey, I have thought of this idea before. It must be a Penang or a Malaysian thing.’

“Then he told me to apply for their investment. It was a very interesting conversation. So, I completed the application on their website, filling in the necessary forms with a pitch and all that. Then, he followed up with an email, asking me a few questions. I took six hours to write a response because they were very difficult questions. I wrote something like a full essay to this investor.

“After that, he said, ‘Hey, can you get on a call?’ So, we had two phone conversations before they decided to put in the money.”

Some of the questions the venture capitalist asked in great detail before the investment decision was made were related to the merchants and customers of Hawkr. And those in-depth queries allowed Tan to reflect on and improve the business further, with a greater emphasis on understanding the merchants on the platform, she says. Food delivery platforms face an increasingly competitive landscape even as more F&B merchants are forced to rely on them to continue running their business in this pandemic environment.

New delivery services have mushroomed over the past two years, with AirAsia joining the fray and e-commerce giant Shopee adding food delivery to its parcel-sending service. These entrants are competing for a share of the market dominated by a dozen or so local and regional players, including GrabFood, Foodpanda, EASI, Bungkusit, DeliverEat, Beep and Tapau.

Hawkr’s direct competition includes the likes of Kravve, an online marketplace for artisanal homemade food, and 1337 Ventures-backed Hometaste. While they are all trying to empower home cooks to turn their cooking skills into a profit-making venture, Hawkr focuses on “the little guys” who are severely underrated in Malaysia’s rich and dynamic food landscape.

“Many of our beloved dishes such as nasi lemak, char kuey teow and laksa, do not come from professional kitchens or culinary schools but humble home kitchens. About half of Hawkr’s merchants have zero professional experience in the F&B industry and they are growing and thriving every day with us,” says Tan.

Being homemade is by no means a compromise on standards. To ensure that merchants maintain the quality of their food, Hawkr requires them to provide a typhoid vaccination certificate.

“We want our customers to know they can trust our merchants wholeheartedly because almost all of them started their business by cooking for their family. Many of our merchants do not differentiate between family and customers; anything that is made for the customer also gets served to their children and loved ones. This is the highest form of appraisal we can give our dearest merchants because we know they will only serve quality meals to their loved ones.”

Hawkr differentiates itself from the stiff competition through a merchant-first approach by tailoring the platform according to what the merchants truly require, she adds.

“Our merchant-first principle is all about making decisions that centre on the merchant experience. We are here to say that if merchants win, everyone wins,” says Tan.

“We believe our merchants should have the agency to succeed. This means all the features and services we offer aid that goal. This may seem like a no-brainer but you would be surprised at how challenging and exciting this can get.

“For example, if a merchant joins another food delivery platform, the platform will most likely assign a rider to pick up from the merchant automatically. However, anyone who takes the time to understand our merchants knows that this service is quite undesirable, as a good percentage of our merchants are family-owned businesses that prefer to do their own deliveries.

“Another tangible example I can give you is how we enable merchants to no longer run their businesses in the dark. This means providing them with powerful data and guiding them to make decisions on the important parts of their business, like pricing strategy and menu creation, with data.”

Hawkr does not operate with an in-house fleet. Instead, it partners with companies like Lalamove and Mr Speedy for the delivery service. The fact that most of the merchandise on its platform are homemade goods that require a relatively longer pre-order period, ranging from a few hours to a few days, allowed it to arrange for external delivery service, says Tan.

“We do a lot of data collection to help our merchants get a better understanding of how their businesses are doing, with monthly analytical reports on traffic and sales, among others, which they can later discuss directly with the Hawkr team to address challenges and meet goals more effectively,” she adds.

With a greater emphasis on building deeper relationships with merchants while offering a more personalised service to customers, Hawkr is considerably less reliant on fancy technology to power its operations. In the initial months of the business, the platform took customer orders using Google Forms posted on social media before building a simple website, which took the team less than a week of work.

The Hawkr application that was launched in January was built on a progressive web app called SPIRITT, an artificial intelligence-powered subscription-based solution that allows entrepreneurs and early-stage start-ups to quickly build full-scale software applications without prior knowledge in coding, design and deployment. The subscription costs US$300 a month.

A bigger part of the expenses is the cost of marketing and promoting the app, as well as merchant acquisition, says Tan.

While running a start-up marked a drastic change from the cushy tech job she had envisioned for herself, the entrepreneurial trait in her was not something that came out of the blue.

“Even before I started university, I already had an inkling that someday I wanted to be an entrepreneur. I didn’t know when or what problem I would solve, but I knew that at some point in my life, I would want to build something,” says Tan, recalling her younger days growing up in Penang and Seremban with no Barbie dolls but an obsession with doing mini-construction projects using Lego bricks.