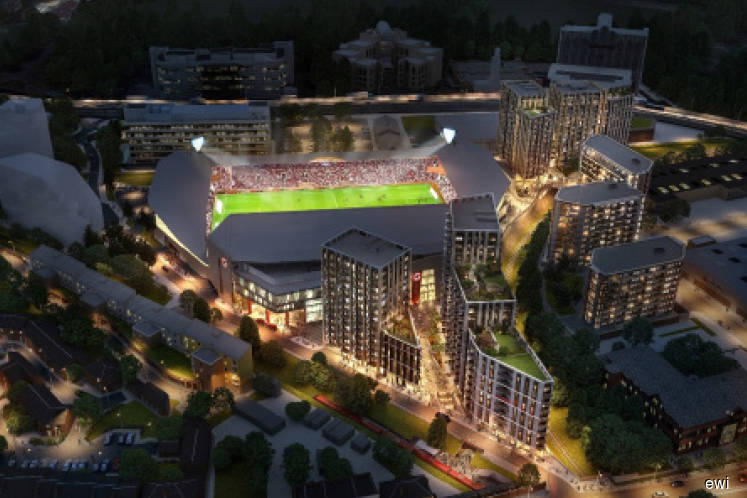 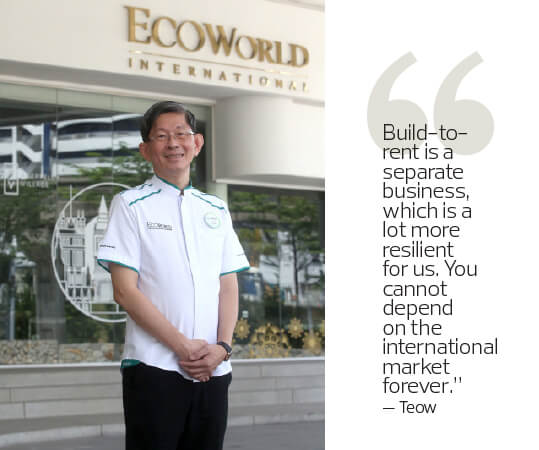 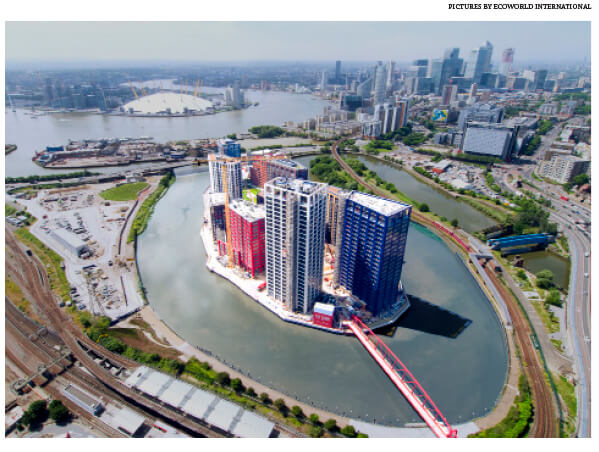 London City Island is scheduled to be completed by year end. 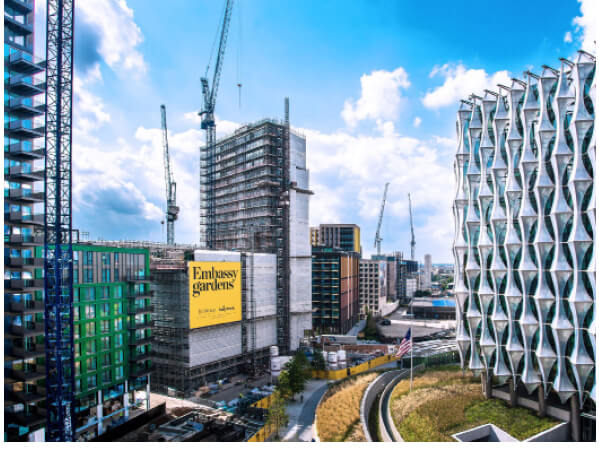 Embassy Garden has one block nearing completion, another at the mid-way point of construction and a third yet, to be launched.

Eco World International Bhd (EWI) is continuing its march into the international arena with new acquisitions and exciting propositions for its international and domestic buyers. Since 2015, its foray into the UK and Australia has seen positive results.

However, in 2017 when it was listed, many might have been surprised that it reported a loss that financial year. Is there something amiss? Not at all. It is because the accounting standards in the respective countries only recognise proceeds upon the handover of properties to buyers.

In December last year, EWI reported a FY2018 after-tax profit of RM35.5 million, compared with a loss of RM87.5 million a year ago, thanks to project handovers in the UK.

“Profit recognition is starting [due to the various handovers of projects] and future funding will be from the proceeds,” EWI president and CEO Datuk Teow Leong Seng tells City & Country.

To recap, when EWI entered the London market, it was in partnership with Ballymore Group. Their projects are London City Island, Embassy Gardens and Wardian London.

“By the end of next year, we would have completed London City Island,” says Teow. “Wardian London is halfway through construction and targeted for handover in 2020.”

As for Embassy Gardens, one block is nearing completion while another is at the mid-way point in construction. A third block is yet to be launched.

Teow says at the moment, the group is focusing on its UK projects but Australia is not forgotten. “Australia is an important market for us. We are looking for small quick turnaround projects.”

He adds that EWI will continue to invest in the UK and Australia because demand for properties in the two countries is strong.

He highlights that currently, the UK property market is seeing a significant undersupply of residential properties.

According to property agent Savills, the peak of completed projects in London was in 2017 with 46,500 units. It forecasts a decline to fewer than 20,000 units by 2021. This is significantly lower than the 66,000 units required to meet demand for new homes annually.

Teow reveals that while EWI is not aggressively looking for more land in the UK, it has scouted out several locations in Manchester and Birmingham.

As for Australia, Teow reveals that Sydney’s population is forecast to rise to 6.7 million in 2036 from five million in 2016 and Melbourne’s to increase to 6.8 million from 4.6 million. He says the strong population growth and low residential vacancy rates will support the demand for residential properties.

EWI’s ongoing projects in Australia are Yarra One in Melbourne and West Village in Sydney, which are scheduled for completion in 2020, says Teow.

Recently, the company made a bid to acquire a land parcel together with a building in Macquarie Park, Sydney. “Last November, we bought 25 of 30 units in an apartment block,” says Teow. “The Strata Schemes Development Act 2015 of New South Wales states that the moment 75% ownership is achieved, the acquirer can compel the rest to sell. We plan to redevelop the site. We will launch the project in 2020.”

EWI is aiming to achieve a two-year (FY2019 and FY2020) sales target of RM6 billion. It believes the longer time frame will provide greater latitude in the scheduling of sales and launches of projects as well as negotiations for better terms for en bloc sales to institutional investors.

Last year, EWI expanded its presence in the UK when it acquired a 70% stake in Be Living, the residential property development arm of Willmott Dixon, a privately owned construction and property services company. The company, which has been rebranded as EcoWorld London, has put the Malaysian developer in the mid-stream property sector, developing build-to-rent (BtR) products.

“Our price points have moved into the domestic market with the £500 to £800 psf products. BtR is a separate business, which is a lot more resilient for us. You cannot depend on the international market forever,” says Teow.

He adds that in view of Brexit, the BtR segment will be EWI’s key growth driver in the medium term. “We are one of the UK’s first build-to-rent operator and it is a new product concept for the UK.  Our maiden product was launched in 2013 and Aberfeldy Village is our first purpose-built BtR project in London.”

Teow highlights that Aberfeldy Village is managed by an experienced team. People can come and view the units, and everything from start to end will be taken care of by the staff to ensure a stress-free experience in renting a unit.

Projects on EcoWorld London’s 12 sites in the UK will have an estimated gross development value of £2.6 billion. The company hopes to deliver 3,000 BtR units over the next two to three years, apart from mid-stream residential units.

“The sites are connected by tube (London’s underground railway system) or train lines and have amenities. They are five to 10 minutes’ walk from a station. After that, you can take a 30 to 40 minutes’ train ride [to Central London], which is normal in London,” says Teow.

The acquisition of the 12 sites is being undertaken in two phases — six sites under Phase 1 and the rest under Phase 2. Phase 2 acquisition is expected to take place in FY2020 and FY2021.

“Out of the six [sites in Phase 2], two have been acquired. So, only four more sites are awaiting planning approval. Once we get it, we’ll pay up. We have a master agreement, but we won’t pay until we get the planning approval,” Teow explains.

He says the company is reviewing the project mix of the sites. “We have 12 sites [under Eco-World London], of which, six are ongoing projects — Millbrook Park, Kensal Rise and Maida Hill, Aberfeldy Village, Nantly House, Kew Bridge and Barking Wharf Phase 1.”

He says Barking Wharf and Kew Bridge, which will comprise 1,100 units in eight blocks, will be sold en bloc to US-based pension fund Invesco Real Estate. “Potentially, for £400 million, I think it is the biggest deal ever done in the UK to date.”

Teow says Invesco will have to hold the property for at least 15 years, after which the units can be sold piecemeal if it so decides.

The two projects will be forward-funded by Invesco. “They will take away the financial burden from us ... we’ll just do the work. We don’t need financing and hardly need any equity. So, as a business, it can chug along without us putting money into it,” he says.

“Going into the local market is important for us ... to be resilient in the long term.

“The benefit of BtR [schemes] is that they give you accommodation that meets local needs. Sometimes, when you do open-market sales, you are appealing to a global audience. So, it may not be for the locals. And BtR [schemes] are affordable and close to transport hubs.

“BtR [schemes] may not work so well in Central London because prices are really high, so rents may not give you the yield. But in the outer ring, this is where the locals will stay and work, or they may commute to Central London. So, it appeals to the locals.”

Teow says the designs of the BtR units often feature similarly sized bedrooms as the people living together may not know each other and thus need their personal space. Also, each bedroom will have an attached bathroom and good sound insulation.

“Why is BtR important? London’s market has been evolving ... it has changed quite a lot — from people owning homes to people renting. Currently, there are about 50% owner-occupiers and 50% renters. In the next few years, 60% will be renters and 40% will be owners. Why is that so? It is because properties are getting more expensive. If you want to work in London and you cannot afford a property there, then you rent,” he says.

“The other thing, I think, is that workers are becoming more transitional ... they are mobile. Today, they are here, and the next year, they may work somewhere else.”

The potential for BtR schemes is strong with data showing London’s population growing and housing supply lagging behind demand.

“London’s population is expected to rise from 8.8 million to 10 million by 2035. Also, in the last 20 years, there was a 40% rise in the number of jobs but only a 15% increase in the number of homes. So, you need more new homes. The supply is well below the government’s target level,” Teow says.

Further, BtR units appeal to investors. “Pension funds love to see consistent growth. So, when you have rents that track the UK retail price index, it fits into what they need. They are buying into assets with consistent yields,” he says.

“Pension funds need BtR because the population is getting older and pensions have to be paid, and the pensions have to be inflation-linked. This correlation is very important. Since the 2008 global financial crisis, investing in equities is getting very risky because the markets are volatile. Also, the UK housing problem can only be solved by increasing supply and BtR gives you that supply.”

The growth of EWI is good news for its shareholders, and while there are challenges on the horizon, the group has put itself in a good position to weather any bumpy ride.