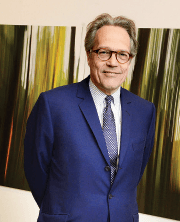 LAST week in New York Lord Charles March debuted a selection of his latest photographic work at the Venus Over Manhattan gallery on Madison Avenue.

You remember him, the Earl of March and Kinrara who hosts the Goodwood car festivals every year at his family estate outside London? March is renowned for his impeccable taste and expertise with period vehicles, particularly those from France and Britain. There are few men in the world with such a robust acumen for understanding luxury automobiles.

In fact, the blurred photographs he showed me one morning before the opening of his show vividly evoked the feeling of driving fast through the woods in early morning light — the rush of blinking every now and again to solidify an image of trees as you fly by.

“I’m very keen on moments and feelings,” March told me. “These are like a memory of a moment when you’ve driven past something. The photograph is rather like the opportunity to sketch that.”

March has taken pictures seriously since the age of 10 and by the age of 16, had begun apprenticing for Stanley Kubrick. As you might expect, his passion for photography is rivalled only by his passion for expensive cars. So of course I wanted to discuss them when we met: to ask his opinion about the spate of new, “driverless” cars and whether he thinks the vintage cars he loves will continue to garner devoted fans. Read on for more of our conversation.

Question: Congratulations on your show. Do you drive when you’re here in the city?
Answer: I’m not driving, no. We’ve got a Phantom here. But I love American cars actually. I’ve got all sorts of hot rods.

Anything in particular?
A 1929 Ford pickup. All rusted, like a rat rod.

Really, you drive that?
All around the estate. It gives people a big surprise. It’s not what they’re expecting.

What are some of your earliest memories of cars?
Well, the racetrack was still going on in the 1960s, so it was definitely down at the track with my grandfather. That got the bug to start. He shut the track in ’66. We tried to get it going again but had a lot of trouble. People resisted it. So I started the festival because they wouldn’t let us open the racetrack.

And now it’s maybe the most prestigious show in the world. Why do you think people are so compelled by cars?
I’m not sure they are as compelled as they were, which is a bit of a worry, but there are few things which are beautiful and practical. Actually that’s not true, come to think of it. What I’m trying to say is they’re both, sometimes, very beautiful, and they do some thing really interesting: They actually move. I think it’s that whole thing about freedom and being able to be on your own and have your music and your car. That’s a gorgeous thing, that feeling of speed and nobility completely on your own steam. Everyone understands it.

Do you follow the modern car market?
Yes. I’m very involved with all those companies.

What do you think of the driverless concept cars? Do people want a driverless car?
Yeah, I think they will. It’s a worry. Urban today kids don’t pass their [drivers] test anymore. They’re uninterested in that. In the future they’ll just get a card, take a car, drive to the country. I worry that the joy, the mobility joy, has been taken away by the digital world. Car manufacturers feel it’s a real concern that not so many people are taking their test any more. It’s catastrophic.

Really?
Well, they can do it now. I do agree that it’s not a technology issue; it’s an infrastructure issue. The car companies will become irrelevant. Cars will just become a house for the software.

It reminds me a little of what has happened in the watch industry, with quartz replacing mechanisms to power watches, and then with cell phones really replacing all of them.

In future people will want to buy real cars like they want to buy real watches: You’ll still pay a fortune for P1 McLarens because everyone still wants the mechanical deal. And for the man on the street who wants to buy a car for US$5,000 (RM17,900), he’ll just buy a self-driving thing. — Bloomberg