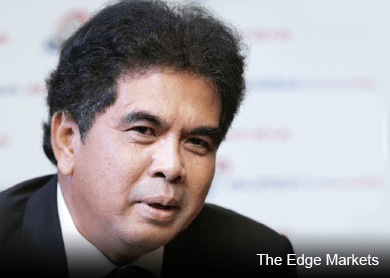 KUALA LUMPUR: Newly-listed EA Technique (M) Bhd ended its maiden trading day at a disappointing intra-day low of 48.5 sen per share yesterday, which was 16.5 sen or 25% below its initial public offering (IPO) price of 65 sen per share.

The shipping and marine services provider earlier opened at 59 sen, a 6 sen or 9% discount to its IPO price. The stock’s dismal debut notwithstanding, managing director Datuk Abdul Hak Md Amin (pic) is still pleased the company has been listed on the Main Board of Bursa Malaysia.

“We are pleased to be listed on the board and have investors be part of our organisation. I think our fundamentals are very strong. We look forward to a better future,” he told pressmen at the company’s listing yesterday.

EA Technique has several expansion plans lined up for next year, one of which includes the conversion of one of its oil tankers into a floating, storage and offloading (FSO) vessel.

Abdul Hak said the conversion of the boat is in line with the company’s move to venture into the upstream oil and gas (O&G) industry.

“The ship will be completed by April next year. It will provide a new revenue stream for us,” he said, adding that the FSO vessel will contribute some US$40 million (RM139 million) to the company’s top line over the next four years.

EA Technique will be delivering six new tugboats between end-December and the end of next year, and three more tugboats in 2016.

“We will be delivering the tugboats one by one for our clients. We are chartering vessels for the interim period while the tugboats are being constructed,” said Abdul Hak.

He said the charter of third-party vessels had dragged down EA Technique’s earnings for its third quarter ended Sept 30, 2014. He said the new tugboats will provide cost savings, which will improve its profits next year.

EA Technique aims to capitalise on the high vessel traffic through the Strait of Malacca. Hence, the company will also upgrade its existing shipbuilding facility in Hutan Melintang, Perak, to include a new dry dock to accommodate more ships.

Currently, EA Technique is busy with an order book of some RM1.2 billion. This will keep it occupied up to 2025. It is bidding for about RM1 billion worth of contracts.

On the current low price of crude oil, he said there has not been any significant impact on EA Technique’s performance as the value of its contracts is already locked in.

EA Technique is looking into the viability of a new business segment relating to the transport of construction materials such as bitumen, cement and asphalt to Sabah and Sarawak, following the announcement of the Pan-Borneo Highway in Budget 2015.

“We are currently in talks with the government regarding this,” said Abdul Hak.

EA Technique’s IPO involved a public issue of 114 million new shares at 65 sen each to raise RM74.1 million for the company. Of that, RM30 million will be used to repay bank borrowings, RM29.2 million for capital expenditure, and RM9.9 million for working capital, with the remaining RM5 million to cover its listing expenses.

This article first appeared in The Edge Financial Daily, on December 12, 2014.