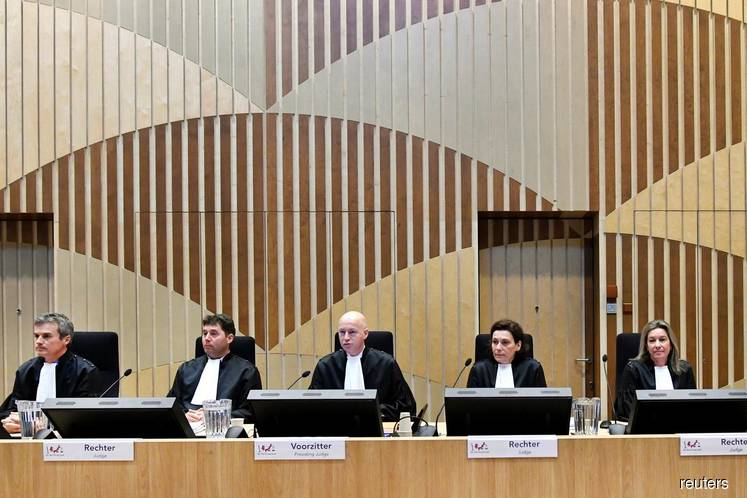 AMSTERDAM (March 10): Dutch prosecutors accused Russia on Tuesday of trying to sabotage the investigation into the downing of Malaysian Airlines Flight 17 in Ukraine in 2014, saying this cast "a dark shadow" over the impending trial of four suspects in the crash.

Pre-trial hearings began in Amsterdam on Monday. Prosecutors say the defendants, three Russians and a Ukrainian, helped arrange the Russian missile system used to shoot down MH17, a civilian aircraft, killing all 298 people on board. Most of the passengers on board the flight were Dutch nationals.

"The sum of all the facts casts a dark shadow over this investigation because there is strong indicative evidence that Russian government is keen to thwart the investigation," prosecutor Thijs Berger said at the second preliminary hearing.

"Several witnesses in this investigation have said that they fear for their lives if their identities would come to light," Berger said.

"The use of Russian security services to discover the identity of witnesses in the investigation is a very real scenario."

MH17 was flying from Amsterdam to Kuala Lumpur on July 17, 2014, when it was shot down by a missile fired from territory held by pro-Moscow rebels amid fighting in eastern Ukraine, killing all 298 aboard. Russia has denied any involvement.

The defendants —  Russians Sergey Dubinsky, Oleg Pulatov and Igor Girkin and Ukrainian Leonid Kharchenko — held senior posts in the pro-Russian militias in eastern Ukraine in 2014, according to prosecutors.

The four face preliminary charges of the murder of 298 people and of causing the aircraft to crash. The suspects are believed to be in Russia and are not expected to attend. On Monday, judges decided the trial would continue with the suspects absent.

Only Pulatov has appointed a defence lawyer, who said on Monday that her client was not involved or responsible "in any way". Girkin has said rebels were not responsible for the plane's downing.

Countries participating in the investigation — Ukraine, the Netherlands, Australia, Malaysia and Belgium — agreed in 2017 to hold trials in the Netherlands under Dutch law, after attempts to set up a U.N.-backed tribunal foundered over Russian opposition.