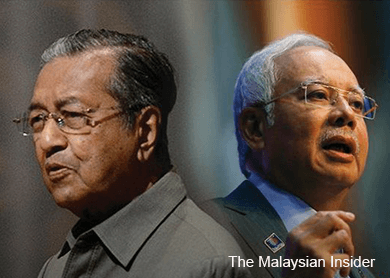 The former prime minister said this was what the people wanted to know after Najib's stepson, Riza Aziz, burst into the Hollywood scene as co-producer for the Oscar-nominated "Wolf of Wall Street" movie, which stars Leonardo DiCaprio, two years ago.

"The movie did not rake in any profits. It is impossible that the money made from the movie was used to purchase luxury properties worth millions of US dollars," Dr Mahathir said in a blog posting.

"The question is, if the money had not come from Tun Razak's family, then where did such a large amount come from? Is it from a business? If yes, what business, where? Has the income tax been paid? To which government?"

Riza had raised eyebrows with a series of property purchases despite his previous job as a junior banker in London.

A recent New York Times article featured businessman Low Taek Jho, better known as Jho Low, and his wealth as well as his role as a property investor, whose transactions involved various parties, including Riza.

Low has also been linked to the controversial state investment vehicle 1Malaysia Development Berhad (1MDB), which has chalked up debts of up to RM42 billion.

Low bought a luxury apartment in Manhattan and a Beverly Hills mansion through shell companies, and later sold them to Riza, a charge denied by Low.

The paper revealed the "incredible wealth" of Najib’s immediate family members and raised questions how the wealth was accumulated.

The report also stated that Najib had been tainted by news of his wife Datin Seri Rosmah Mansor's alleged spending habits on jewellery and designer handbags.

The Prime Minister's Office responded to the NYT report saying: "... neither any money spent on travel, nor any jewellery purchases, nor the alleged contents of any safes are unusual for a person of the prime minister’s position, responsibilities and legacy family assets."

Instead, it said Najib's wealth came from a family inheritance.

Najib later joined his brothers and described their father, Malaysia's second prime minister, as frugal and a man of integrity.

Yesterday, PAS Youth lodged a report to press authorities to investigate reports on Najib living a life of luxury.