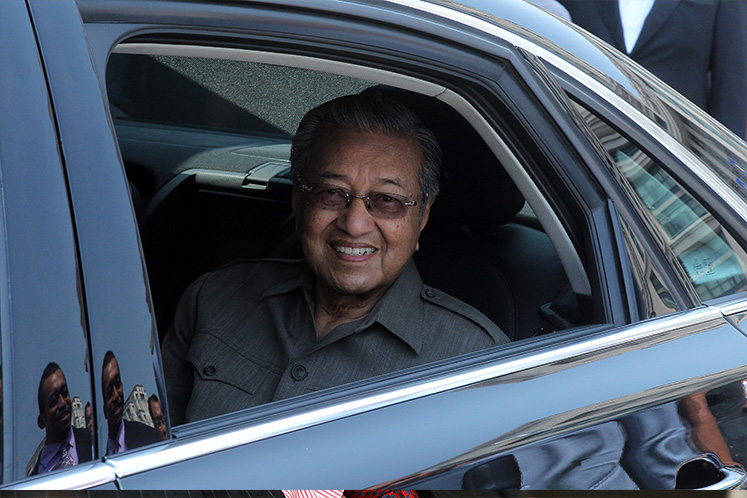 KUALA LUMPUR (May 15): Prime Minister Tun Dr Mahathir Mohamad plans to play a background role in the government even after he hands over the reins of power to Datuk Seri Anwar Ibrahim in one to two years' time.

Dr Mahathir said PKR de facto leader Anwar, who is expected to be released from Sungai Buloh Prison tomorrow, would have to contest in a by-election once he secures a royal pardon.

“Then he would be a Member of Parliament, and [be] given a seat in the Cabinet though we have not decided which one yet. In the meantime, I will be PM,” he said in an interview with the Wall Street Journal that was telecast live in Japan.

Dr Mahathir added that there would be no special powers accorded to Anwar when he is released.

“We have a coalition of four parties (and) all have equal strength and influence in the coalition. He (Anwar) is leader of one of the coalition parties. I expect him to play the same role as the (leaders of the) other three parties.

“There will be no special powers given, excepting that given to Ministers, deputies or DPM, which [is] something we already accept. But as a leader of one of the [parties in the] coalition, we expect he will have the same power as the leaders of the other parties, that includes me — excepting that as PM I would have the power,” he added.

Dr Mahathir said he was needed to run the country in the first one or two years because the public supported Pakatan as they had faith in the leadership to resolve problems.

"This depends on the experience of political (leaders) and that includes me, because I was the leader of the Opposition. Their faith seems to indicate that they want someone responsible for some time until the problems have resolved but I myself, I am 93. By the time I am 95, I should be ready to step down, but I will play a role in the background...but for the time being I will run the government,” he added.

However, just in the first week as government, there were already rumbles of dissent over Dr Mahathir's announcement of three core Ministerial posts — the Home, Finance and Defence Ministers. PKR vice president Rafizi Ramli stated that the party was not consulted on the appointments.

Anwar later responded that while PKR supports Mahathir’s leadership, he urged for more inclusive negotiations on the Cabinet positions with the coalition’s presidential council.

On this, Mahathir said as Pakatan is made up of four parties, he has to try to satisfy everybody.

“I suspect some resistance on names would be made but so far we have been able to resolve. They (the parties) have accepted that [the] final decision would be made by me. The four parties can submit the names for candidates and Ministries they are interested in, but I will make the final decision,” he added.