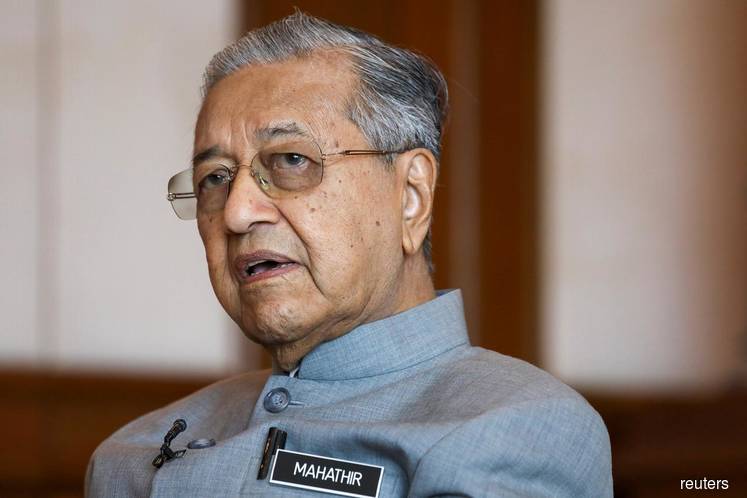 LANGKAWI (Feb 14): Tun Dr Mahathir Mohamad today dismissed allegations and speculation linking him to attempts by certain quarters to keep him as prime minister for the rest of the electoral term.

On the other hand, the elder statesman reiterated that he will keep his promise to hand over the post to his successor after the Asia-Pacific Economic Cooperation (APEC) summit which Malaysia hosts in November this year.

Dr Mahathir’s statement today was in response to claims and suggestions, as reported in a news portal today, that 138 MPs had signed statutory declarations (SDs) in support of him completing a full term as the prime minister.

“Pakatan Harapan (PH) has the majority in Parliament today. This 138 figure is the work of others and I have no knowledge as to how they came up with this. In other words, there must be PH support to get this figure,” he told reporters after performing the groundbreaking for the Villa Sirehan: Phase 2 project and a visit to the Rebungan Resort Langkawi in Ulu Melaka, here today.

Asked if he was aware of the SDs, the prime minister replied: “I hear all sorts of things. (Some are saying) PM for 20 more years… I am 94 years old, 95 in another few months, so quite impossible."

“I promised to step down after APEC, so I will keep to my promise. I am not involved with anything else (SDs), only the promise to step down and I will step down,” he said.

Asked whether he felt that talk over the prime minister power transition issue needs to halted, Dr Mahathir said the issue continued to be talked about as the subject was constantly the focus of the media.

"It’s the press (media), the press gets excited (over the transition issue), where there is controversy, there is news. So to the press, if both (PKR president) Datuk Seri Anwar Ibrahim and I do not get along for instance, the better for them to sell their stories,” he said.

When asked, he said certain PH leaders tend to talk about the issue only because the media kept hounding them to comment on it.

“The Pakatan Harapan leaders come out with statements (on PM power transition issue) because they were asked about it by the media, otherwise there will [be] none (statements).

In a statement yesterday, Anwar said  he had met Dr Mahathir in Putrajaya to discuss the transition plan for the post of prime minister.

Anwar also claimed that PAS, a group from Umno and a handful of PKR members were involved in efforts to gather signatures to support Dr Mahathir’s leadership until the end of the full term.

Anwar said Dr Mahathir was not involved in these efforts and in fact reiterated his firm statement that he would hand over power as promised.