Dr M saddened by the state of Malaysia today

AT a recent corporate function in Sri Lanka, The Edge managed to have a tête-à-tête with former prime minister Tun Dr Mahathir Mohamad, who admitted to being “a little bit saddened” by the state of the nation today.

“We were on such a [good growth] trajectory, and then suddenly, we went flat, then we went down,” says Mahathir, who helmed Malaysia for 22 years.

While official figures often paint a rosy picture of the nation’s economy, admittedly there are underlying issues.

In the third quarter of this year, Malaysia’s real gross domestic product (GDP) annual growth moderated to 5.6%, compared with 6.5% in the previous quarter. For the quarter, private sector activity remained the key driver of growth.

A head of research of a local brokerage says while the present picture painted is pretty, there are fears for the coming year as oil prices continue to fall.

The main concern is that Petronas, which paid out close to RM60 billion in dividends, taxes and royalties to the government in financial year 2014, may be too strapped to do so this time round. Brent crude fell below US$65 per barrel — the first time in over five years — last Thursday.

If crude oil maintains at US$75 a barrel, Petronas officials estimate payments to the government at RM43 billion in 2015.

Lower oil prices do not augur well for the country’s finances as the government aims to lower the budget deficit from 3.5% this year to 3% next year. Federal government debt remained high at RM568.9 billion in June, which works out to almost 53% of GDP, a rung below the self-imposed 55% limit.

Also highlighted by the head of research is the Gini coefficient — a measure of statistical dispersion, representing the income distribution of the people in a country and is a yardstick by which to measure inequality. Malaysia’s Gini index has been hovering around 0.4 since the late 1980s, and is among the highest in Asia. (A Gini index of 0 represents perfect equality and 1, maximal inequality.)

The Malaysian Institute of Economic Research interestingly says the share of private investment in Malaysia slipped to 18% — below the 20% threshold confidence level — in the third quarter of 2014.

Mahathir says it will be difficult for Malaysia to regain some of its lustre as the momentum wanes. “You know, when something is taking off and you suddenly stop, and then, you try and do it again … the graph doesn’t work that way.” 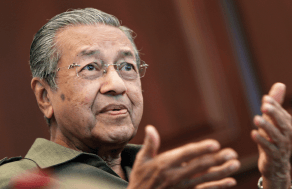 He says the current focus on property development by the federal government is flawed.

It was recently reported that many Chinese companies were accumulating land, particularly in Johor, looking at developing properties. A few years ago, there was an influx of Middle Eastern money as well, targeted at developments down south.

“Investment in properties does not raise the income level of the people. At the moment, what I see is that people come in to buy properties, and then, take the money out for themselves,” says Mahathir.

“What we need is foreign direct investment in hi-tech industries, which will give our people an income or [better] wages.”

He says with a focus on hi-tech industries, there would not be a need for so many foreign workers. Foreign labour has resulted in billions of ringgit being remitted to the home countries of the workers.

Latest reports have it that the official foreign worker population stood at 2.3 million, but the unofficial figure was over 3.5 million.

“If we move away from labour-intensive businesses and focus on high value-added hi-tech industries, the income goes to our trained personnel. And we can train our people so that they can get higher salaries,” says Mahathir.

Meanwhile, the general sentiment has not been good with foreign funds exiting the local bourse. In the first 10 days of December, total net outflow was RM1.4 billion, BIMB Securities reported recently.

There is also a dark cloud over the property sector, which has been hit by slowing sales due to credit-tightening measures imposed to cool the market. The Goods and Services Tax, slated to kick in in April 2015, is also expected to have a dampening effect.

UEM Sunrise Bhd, the largest developer by market value, has said it may delay certain launches as a result of the steepest slump in property sales since the recession 16 years ago.

To counter the rising cost of living, the government has been giving out aid in the form of Bantuan Rakyat 1Malaysia (BR1M). Under Budget 2015, Prime Minister Datuk Seri Najib Razak increased BR1M payments from RM650 to RM950 for households with a monthly income of RM3,000 and below, and from RM450 to RM750 for those earning between RM3,000 and RM4,000.

He says it is distressing that the country’s growth is worse than our neighbours’, something that has never happened before.

“Of course, we have always been lower than Singapore, but to be lower than our other neighbours, that shows that something is not right.”