Dr M: Is the PH govt directionless? Let’s look at what it has done 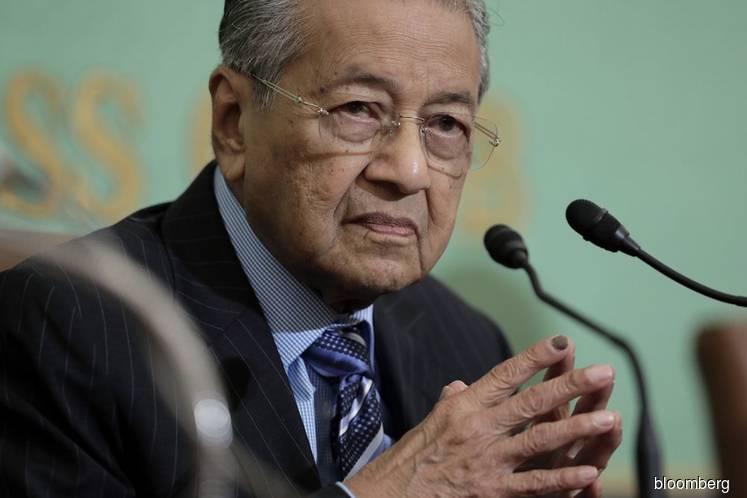 1. When a new party takes over as a Government, it would be a miracle if it were to execute all its plans and promises overnight. Certainly, when PH took over from BN which had ruled the country for the past 60 years, it would be an even greater miracle if it can implement its plans and agenda immediately. It is not taking over just any Government. It took over from a kleptocratic Government which had raped the nation for years, destroyed its finances, undermined its administrative agencies, abused its laws, borrowed well beyond the ceiling permitted, placed the country on the path to bankruptcy, made the people dependent on the Government with bribes and generally undermined the moral of the people.

2. Of course, a lot of people were happy to enjoy corrupt money and many illegal favours. They would like these bad practices to continue. But the majority of the people knew the sad state of the country and ensured that the corrupt Government was overthrown.

3. This was a miracle of sorts. A “hodge-podge” coalition of 4 parties, together with another party outside the coalition and even a person not linked in any way to the parties, took over.

4. They were united only in the desire to bring down the kleptocratic Government. Otherwise they each had their own ideology and agenda. In other countries when a common objective is achieved, the fragile unity would break up as each party would try to take over. A bitter struggle would ensue. In the end the coalition would break up. In one Middle Eastern country, the ensuing struggles ended up with the military seizing power. It was back to square one.

5. This did not happen in Malaysia. The fragile opposition coalition was sustained, even with the inclusion of a non-member party as well as an independent individual who joined the cabinet. They formed a Government. And they seem to be working together, having formed a cabinet without any written agreement as to who takes what. This is the 2nd miracle. The cabinet seems to work. At least they can meet, discuss and make decisions. Of course, many criticised their decisions. This is normal. No Government can have the approval of everyone every time. The important thing is that this fragile cabinet is still functioning.

6. But many would say, this Government is directionless. Is it? Let’s look at what it has done. Despite a huge debt of well over a trillion Ringgit, it apparently has been able to retain the solvency of the country. The creditors are not suing the Government. Indeed, some are even keen to lend more money at low rates. The Government is clearly credit worthy. The debt has been reduced.

7. Politically the country is stable. Yes, there are some disturbances in a member of the ruling coalition. But this is normal. No one has tried to overthrow the Government by a vote of non-confidence. They know it will not succeed.

8. Then the economy. It is still growing at a good rate for a country at this stage of development. Yes, there is an outflow of funds and the currency has been devalued. This is a function of the market. Malaysia still has the biggest savings. Bank Negara Reserve is very high – RM400 billion plus. Other funds, such as PNB, KWSP, and some smaller funds add up to over RM1.5 trillion. Foreign assets are big. National Oil Company Petronas is doing well with more than 100 billion income. It is 100% Government owned. Yes, the Ringgit is depreciating. In many other countries, reserves of this size would guarantee the strength of the national currency. But the market apparently cannot believe this strength of the Malaysian finances and its currency.

9. The fact is that the Malaysian economy and its currency are strong. The market and the detractors may not think so. But the Government has faith in its financial and economic policies. And so do foreign and local investors.

10. Socially, the Government has launched the Shared Prosperity scheme. For our detractors this does not indicate clear direction. But for the Government the direction is clear. We don’t want just to recover and be prosperous. We want to share our wealth equitably.

11. Towards this end we have initiated a new industrial plan, complemented by a new agricultural plan. I will not elaborate. But we know the direction we are going. Outsiders may not. But we do.

12. We are clear as to what we want to do and how we will do it. Plans may take a week or so to create but implementation will take much longer, at least two years or more. But the work has already begun. For the observers it would seem that nothing is moving. Rome was not built in one day. When Malaysia was switching from an agro-based economy to an industrial economy, it also took time. But most of us could not remember and the young never saw the transition. Most were born when the transition was accomplished. It is difficult to imagine an agricultural Malaysia today.

13. The same will happen now. The transition will take time – perhaps two years or more from now. But believe me it will happen. Indeed in some ways it is already happening. We are going paperless and soon there will be cashless. Digitalisation is already happening and Artificial Intelligence (AI) is contributing towards increasing speed of work and transaction.

14. Even for me it is frustrating to wait. But wait we must. The machinery of Government has been cleansed and is rapidly adapting to the new ways of working. Even the Ministers are adjusting to being in the Government instead of the opposition.

15. The accusation that this PH Government is directionless is made by those who refuse to acknowledge reality. Are we really the same as the Malaysia under the previous Government? Or are they saying they prefer the kleptocratic Government better.

16. We don’t steal money nor raise loans so as to have money for bribing people. We spend what we have. What we have is less money. We cannot afford to give free money to people. Our way is to increase or create jobs. But the people must be willing to take up the jobs or the business opportunities created.

17. We are doing all these. But we are not attracting attention to them. In time they will become clear contribution to the country’s economy.

18. The world today is in a state of turmoil. No one is really doing well. Look at what is happening in Latin America, the U.S., Europe, the Middle East, Africa, South Asia, even Australia. Only China, Japan, and South Korea are doing relatively well, but even the countries of Northeast Asia are having intractable problems.

19. Then look at Malaysia. We are stable, peaceful and the Government respects the law. We are removing draconian laws or suspending them pending abolishment or amendment. People feel safe travelling anywhere in the country. During the celebration of the new year 60 to 80 thousand people gathered to enjoy the shows. This cannot happen even in some developed countries.

20. I will not talk about natural disasters. We have been spared though we are not quite grateful.

21. Yes. Malaysia is recovering from the disasters caused by the previous Kleptoctatic Government. Even now we are enjoying better governance.

22. Give the Government a little bit of time and participate fully in the Shared Prosperity Policies, and in two years time you will realise that the direction of the Government is right.

Read also:
Economy is strong, 'but wait we must' to see full impact of govt initiatives — Dr Mahathir
Dr Mahathir is education minister for the time being — PMO