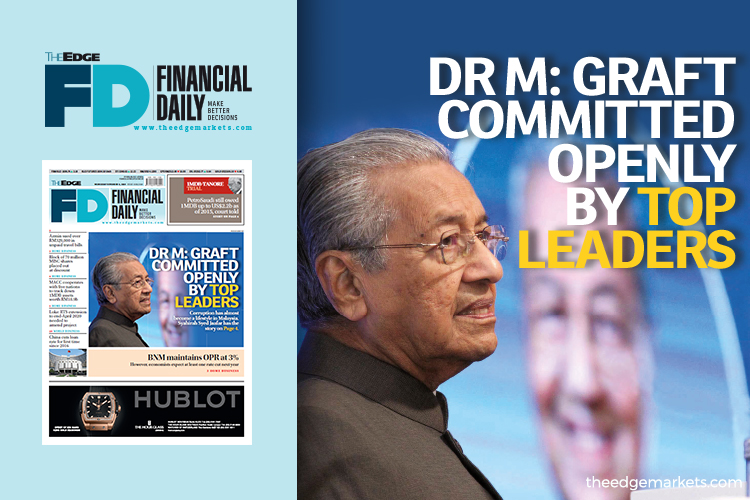 KUALA LUMPUR: Prime Minister Tun Dr Mahathir Mohamad said corruption in this country has over the years reached a level of almost becoming a lifestyle, with cash ushered in and heralded as the new king.

“I used to say that previously, when corruption was an ‘under the table’ act, it was a scourge to our nation’s future. But the last few years, saw corruption becoming an ‘over the table’ act, being committed openly by the top leaders. Others will then do the same without fear.

“From an act viewed with disgust, it became acceptable and, before long, those not into it would be considered stupid. It reached a level of almost becoming a lifestyle and that was when cash was ushered in and heralded as the new king,” he said in his keynote speech at the 11th International Conference on Financial Crime and Terrorism Financing yesterday.

Dr Mahathir noted that no matter how tight and comprehensive regulations are introduced and imposed in Malaysia, criminals are still able to find a way around it, which warrants for new and innovative responses.

“While we appreciate the insights and latest development in dealing with the present day sophistication of financial crime and terrorism financing, the chink to the armour is always linked to bad and ineffective governance due to the lack of integrity,” he said.

Dr Mahathir said the people’s wish was that the new government installed following the 2018 general election would uphold good governance, integrity, and get rid of corrupt practices and the abuse of power.

“These demands were the result of the manner the previous administration had conducted their affairs. They ignored these high values and, in turn, were rejected by Malaysians who could not stomach the blatant abuse of power and corruption,” he said.

The prime minister noted that it was during this period that financial crimes were committed brazenly and blatantly without regard for laws and regulations.

“This was only possible because the highest power entrusted to defend these laws was the very one committing them,” he said.

“Without decisive shifts in the behaviour and expectations of Malaysians in favour of transparency and accountability, our efforts to achieve the Shared Prosperity Vision will fail,” he stressed.

The prime minister went on to say that while laws and governance frameworks play an important part in a clean, transparent and accountable Malaysia, they can only go so far.

It needs to be supported with the right leadership in both the public and private sectors in order to ensure that this reinforced culture of integrity will be a new norm in Malaysia, he said, stressing the need for the country to regain its reputation and credibility in the eyes of the world.

“We once stood shoulder to shoulder with growing Asian economies. Rampant corruption and greed have led us to lose our way. This must not happen again. Our reputation had been diminished and discredited. We need to regain our reputation and credibility in the eyes of the world,” he said.

At the event, Dr Mahathir launched the Malaysia Financial Intelligence Network (MyFINet), a new public private partnership (PPP) initiated by Bank Negara Malaysia (BNM) aimed at being a platform to encourage sharing of intelligence and current topical issues between law enforcement agencies and financial institutions in managing significant threats to the nation.

He said there needs to be a strong cooperation between regulatory, supervisory and law enforcement agencies in paving way for deeper collaboration in other forms that bear effective outcomes.