Dr M’s departure has no impact on Proton — analysts 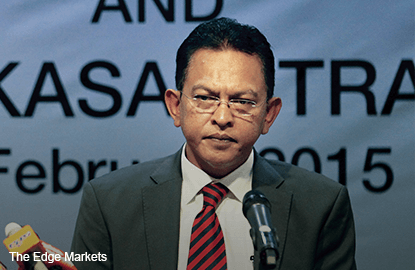 KUALA LUMPUR: The departure of Tun Dr Mahathir Mohamad from Proton Holdings Bhd will have no financial impact on the national carmaker’s financial well-being nor lead to a major shift in strategy, said auto industry analysts.

Dr Mahathir resigned as chairman of loss-making Proton, as well as from its wholly-owned subsidiary Group Lotus plc last Wednesday, amid his calls for Prime Minister Datuk Seri Najib Razak to quit over 1Malaysia Development Bhd’s performance, as it amassed about RM42 billion of debt in less than five years.

The former prime minister had assumed both posts on May 16, 2014, at a time when Proton had lost its No 1 ranking to rival Perusahaan Otomobil Kedua Sdn Bhd, with its share of the local auto market slipping to 15.7% based on the vehicle sales data for February 2016 from the 29.6% it commanded in 2011.

On whether Proton can achieve the break-even point in the financial year ending March 31, 2017 (FY17), Wong said it will depend on the market acceptance of its new Perdana model.

Last month, Proton chief executive officer Datuk Abdul Harith Abdullah was reported as saying that the carmaker was hoping that the launch of new models such as the Perdana will help it achieve sales of 150,000 units this year. The figure would translate into a market share of 20% of total vehicle sales in the country.

A head of research from a bank-backed research firm also does not expect any major change for Proton after Dr Mahathir’s departure, adding that the carmaker has to tackle its brand positioning first before it can turn itself around.

He noted that a few recent developments showed that the carmaker was on the right track, such as its collaboration with Japan’s Honda Motor Co Ltd on the new Perdana, as well as the joint venture with Suzuki Malaysia Automobile Sdn Bhd to roll out a new model before the end of 2016.

The head of research said Proton also announced last month that it was recalling nearly 100,000 units of its Exora, Preve and Suprima models to fix a faulty CFE oil cooler hose, reflecting that it was serious in improving its products for customers’ safety and to regain their trust.

“Going forward, it will depend on the products that will be launched. It depends on how quickly Proton can turn around with the new models,” he added.

The brainchild of Dr Mahathir, Proton held an 85% share of the local auto market in its heydays and was privatised in 2012 after it was acquired by DRB-Hicom Bhd in a deal worth RM3.02 billion.

Proton and Lotus continued to be a drag on DRB-Hicom’s earnings. During the third financial quarter ended Dec 31, 2015 (3QFY16), DRB-Hicom’s auto division recorded a 5.9% year-on-year contraction in revenue to RM2.66 billion, while its pre-tax loss widened to RM174.3 million from RM28.7 million in 3QFY15 due to heavy year-end discounting and sales promotions to defend market share.