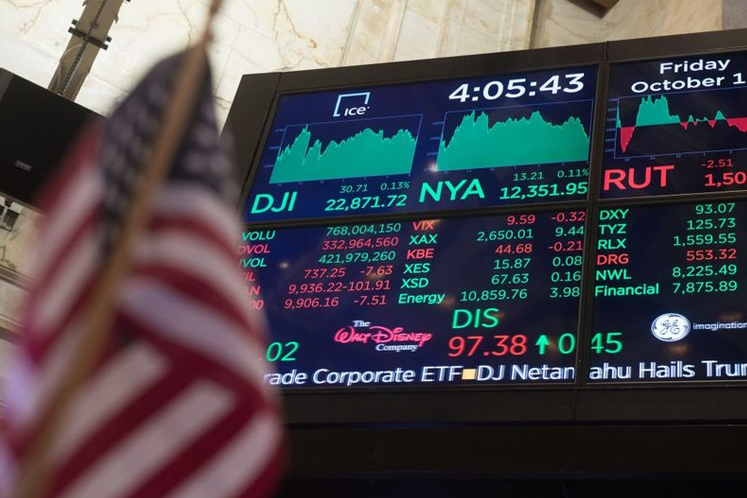 NEW YORK (July 10): U.S. stocks rose on Monday, giving the Dow and S&P 500 their biggest gains in more than a month, as bank shares jumped ahead of earnings reports later this week.

"We're on the eve of what's going to be a dynamite earnings season," for the S&P 500 overall, said Bucky Hellwig, senior vice president at BB&T Wealth Management in Birmingham, Alabama.

A stronger economy and plans for more buybacks also are helping bank shares, he said.

Investors may also be shifting their focus for now away from trade tensions between the United States and China. The two countries slapped tit-for-tat tariffs on $34 billion of each other's goods on Friday.

"The angst going into last Friday was pretty significant, and now, with the realization that we're here and the world hasn't come to an end,... the money is falling in," Hellwig said.

Helping to boost the Dow, Caterpillar Inc rose 4.1 percent. The S&P industrial sector jumped 1.8 percent. Caterpillar and other industrials have been among the hardest hit by recent trade worries.

U.S. analysts' estimates for S&P 500 second-quarter profit growth have risen slightly since April, putting the latest forecast at around 21 percent, according to Thomson Reuters data.

Twitter Inc sank after the Washington Post reported the social media company suspended more than 70 million fake accounts in May and June, which analysts said could be negative for user growth, but it pared losses after its CFO tweeted that most accounts Twitter removes are not included in reported metrics. The stock ended down 5.4 percent.

Advancing issues outnumbered declining ones on the NYSE by a 1.77-to-1 ratio; on Nasdaq, a 1.65-to-1 ratio favored advancers.

About 6.0 billion shares changed hands on U.S. exchanges. That compares with the 7.0 billion daily average for the past 20 trading days, according to Thomson Reuters data.