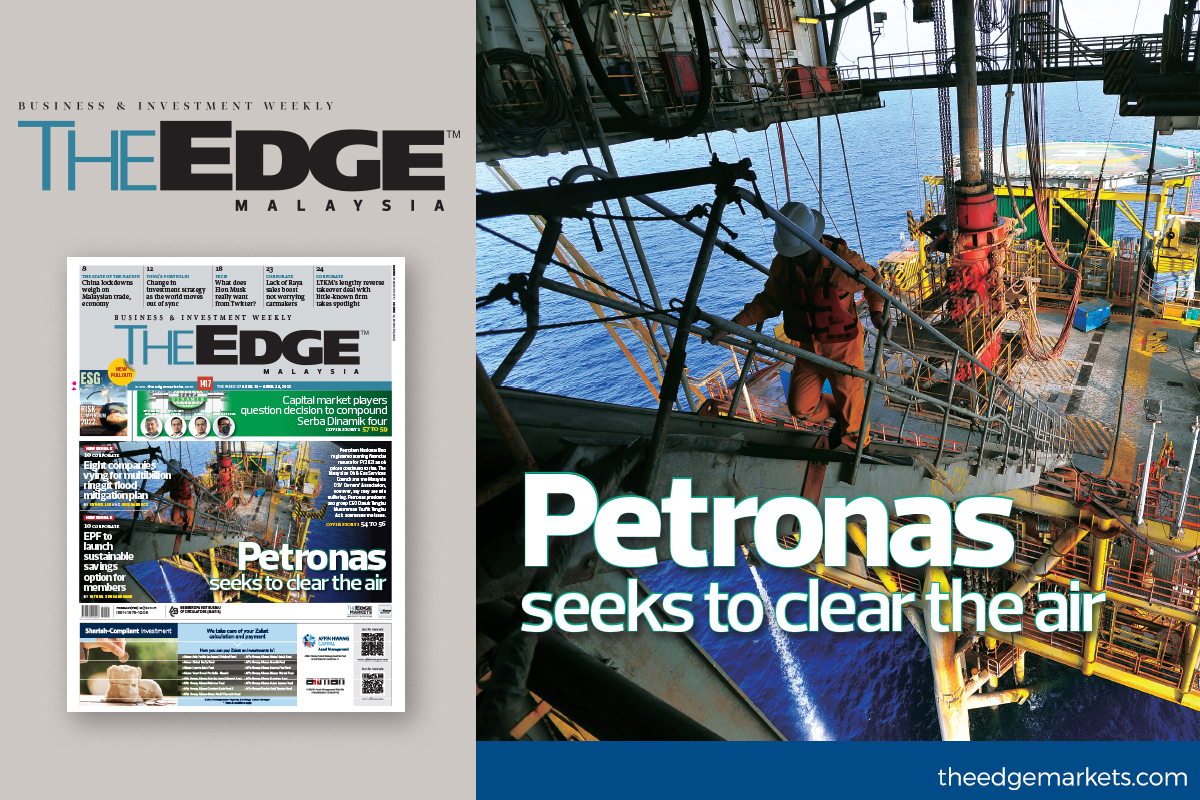 KUALA LUMPUR (April 16): Things appears to be going well for national oil company Petronas, with oil prices breaching US$120 (about RM508.26) per barrel in March this year and the company chalking up stellar profits after tax of RM48.6 billion on the back of RM247.96 billion in revenue for the financial year ended Dec 31, 2021.

While there have been small hiccups recently — such as a suggestion for it to take control of ailing Sapura Energy Bhd — the national oil company quickly brushed aside such notions and continued with its mandate to manage Malaysia’s oil and gas (O&G) resources.

However, it has come to light that the Malaysia Oil & Gas Services Council (MOGSC) and the Malaysia OSV Association have written to Petronas to air their grouses, chiefly to suggest that Petronas was raking in billions at the expense of the O&G players' margins. According to MOGSC, Petronas had in 2015 sought their assistance and renegotiated contracts, which is eating into their members' profits.

There was also a claim that Petronas had been slow in disbursing Covid-19 claims that ran into the hundreds of millions to industry players, leaving them without adequate cash flow.

Petronas president and CEO Datuk Tengku Muhammad Taufik Tengku Aziz has dismissed the allegations but met up with MOGSC anyway in an attempt to find a middle ground.

Are the O&G players too dependent on Petronas? Do the companies have what it takes to make it without Petronas’ assistance?

Will the much-needed consolidation finally happen in the fragmented industry?

'Petronas seeks to clear the air', The Edge Malaysia's cover story for the week of April 18-24, looks into these and more.

The second cover story of the week focuses on the Securities Commission Malaysia (SC)'s decision to compound Serba Dinamik Holdings Bhd and its four top executives RM3 million each for the submission of false information involving a staggering revenue sum of RM6.01 billion in the company’s financial statement for the period ended Dec 31, 2020, which has set tongues wagging.

Capital market players The Edge spoke to questioned the decision, which was taken following the decision of the public prosecutor to accept the representations made to the Attorney-General’s Chambers by Serba Dinamik and the individuals involved, regarding the charges pending in court.

Notably, there is the observation that the authorities' decision might signal that corporate players can “falsify” numbers and documents and yet not have to serve a day in jail, despite incarceration being provided as a penalty under the Capital Market Services Act, the very law that the top officials of Serba Dinamik had allegedly breached.

This is despite the fact that many investors were burnt when Bursa Malaysia suspended the trading of Serba Dinamik's shares following the group’s refusal to release Ernst & Young Consulting Sdn Bhd's findings following the special independent review it was appointed to do on the issues about the financial statement that KPMG first red-flagged as Serba Dinamik's external auditors.

Will the SC explain why it suddenly decided to settle the criminal charges it brought against Serba Dinamik and its top execs with the compound?

What kind of message does this decision send to the capital markets, and how will this affect investors' confidence?

Check out both the Petronas and Serba Dinamik stories in the latest copy of The Edge Malaysia.