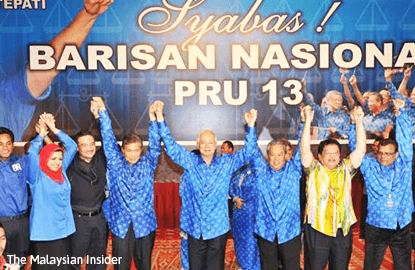 (Jan 27): An unnamed Saudi source has confirmed the country donated the RM2.6 billion to Datuk Seri Najib Razak, saying it was to help the prime minister win the 2013 polls and counter potential Muslim Brotherhood influence in Malaysia.

The well-placed Saudi source, who asked not to be named, told the BBC the payment was authorised from the very top – from Saudi Arabia's late King Abdullah – with funds coming from both his personal finances and state funds.

"The secretive donation to Najib was allegedly made over several wire transfers between late March 2013 and early April 2013, just ahead of the general election on May 5," the source told the BBC.

The Saudi source said the donation was made amid concern in Riyadh about the influence of the Muslim Brotherhood, the BBC reported today.

The global broadcaster noted that at the time, the opposition alliance had included PAS, whose "founders were inspired by the Brotherhood, although there is little evidence the Brotherhood actually has much support in Malaysia".

The Saudi source also told the BBC the donation was to help Najib and his ruling coalition win the election, employing a strategic communications team with international experience, focusing on the province of Sarawak, and funding social programmes through party campaigning.

Asked why should the Saudis care about an election in a non-Arab country more than 6,000km away, the source told the BBC: "The answer lay in their concerns over the rising power of the Muslim Brotherhood, which they consider a terrorist organisation."

It reported that the Saudis were already upset at events in Egypt, where President Mohammed Morsi was busy consolidating the Brotherhood's hold on the country.

The Saudi insider said it was not unusual for the Saudi royal family to hand over this amount of cash in a personal donation as "Jordan, Morocco, Egypt and Sudan have all been beneficiaries of multi-$100 million donations from the Saudi royal purse".

"There is nothing unusual about this donation to Malaysia," he told the BBC, "It is very similar to how the Saudis operate in a number of countries."

The BBC reported that Saudi Arabia was quick to support the overthrow of Morsi in Egypt, providing the military-backed government with billions of dollars in aid and loans following its takover.

"However, questions are still being asked about the secretive and convoluted nature of the money transfer, and the fact that Malaysia's prime minister returned 91% of it just four months later.

"The remaining US$61 million has not been accounted for," the BBC said, noting Malaysia's attorney-general had declared the investigation files closed.

A British corporate investigator with extensive experience of the Middle East told the BBC that the US$681 million was paid through the Singapore branch of a Swiss bank owned by the rulers of Abu Dhabi.

"It is very murky", he told the BBC in the report today. "This case will never be fully cleared up until the Saudis and the Malaysians release all the transaction data, and that has not happened."