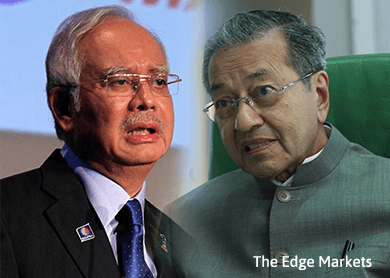 Najib failed to turn up at the dialogue on current issues last Friday, where his supporter-turned-critic Dr Mahathir was present.

Instead, the people should “take a step back” and analyse the facts, said Najib, adding that he had done so much in the six years since taking over office.

“Tun [Mahathir] is a veteran politician and a master of public perception. He understands that political statements are not entirely about the truth but about what the people will believe in the court of public opinion.

“This is why he continues to make insinuations, speaking half-truths, cracking misleading jokes and twisting statements to make his views exciting and palatable,” Najib said in a continuing series of questions and answers on his blog dedicated to tackling allegations thrown at him.

“We have done so much in the last six years, but Tun [Mahathir] ignores these and only highlights allegations and problems as he knows that is how to influence the people’s mind against the current government and me,” he said on his blog www.najibrazak.com.

“I urge Umno and BN (Barisan Nasional) members, along with all Malaysians, not to be taken in every time Tun [Mahathir] attacks. Take a step back and analyse the facts.”

This is the third time that Najib has taken to his website to address the accusations levelled at him by Dr Mahathir, including on the murder of Mongolian Altantuya Shaariibuu, use of government jets, Barisan Nasional winning the next general election and debt-ridden 1MDB.

Dr Mahathir has repeatedly called for Najib’s resignation, saying that an elected leader is not immune from removal before his term is out.

The elder statesman said that even former prime minister Tun Abdullah Ahmad Badawi, who was elected with a bigger majority, was persuaded to step down by Najib.

Addressing this, Najib said yesterday even if he steps down, Dr Mahathir would continue to intervene in the country’s administration, adding that the people tend to believe what he says because of who he was.

“He can say he is simply exercising his democratic rights as a citizen, but this is Tun Mahathir. [The] people tend to believe whatever he says, even if it is not entirely accurate. It has a significant effect on public perception, as he is not just any ordinary citizen.

Najib also said retired heads of state around the world know well that they should not intervene in the work of successive administrations because their words still carry weight.

“There are reasons why most former heads of state across the world do not intervene in the work of current administrations because whatever they say can easily affect the system.

“Tun [Mahathir] is a veteran politician and a master of public perception. Tun [Mahathir] did many noble and great things as prime minister, but he is no longer running the administration,” he added. — The Malaysian Insider