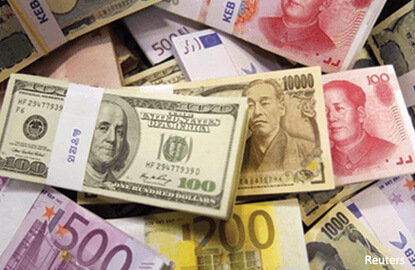 LONDON (Jan 13): The dollar limped towards it worst week in two months on Friday as softer-than-expected trade data from China added to signs that investors may be falling out of love with the post-U.S. election Trump trade.

The dollar index, which measures it against six of the other top world currencies, was down fractionally for a third straight day in early London trading and almost one percent lower on the week.

Individually it stood at 114.7 yen having given up modest ground made in Asia, while the euro clawed up to US$1.0630 to bolster a fourth straight week of gains.

Nomura's Jordan Rochester said the greenback was still hobbled by disappointment that President-elect Trump hadn't touched on fiscal stimulus at a news conference on Wednesday and instead talked about divisive plans, such as building a wall on the border with Mexico.

"It opens up the possibility for the market that he could go down the more toxic route which is becoming more protective on trade," Rochester said.

"Therefore it's quite prudent for investors that the dollar is a bit softer, especially against the yen which is the proxy here."

Some analysts however think the dollar could regain an upper hand as soon as more details of Trump's stimulus become clear.

More Federal Reserve members talked on Thursday about rate hikes and trimming the size of the central bank's balance sheet and U.S. retail sales data are due to be released later that could give the dollar a jolt.

A Reuters poll shows that economists expect a 0.7% pickup in retail sales in December, following 0.1% growth in November.

"Medium term we should still see a stronger dollar," said James Binny, head of currency with State Street Global Advisors in London. "The positions were just so one-way and we needed a bit of a clearout to make some further progress."

The week's other main G10 loser, sterling, remained shaky on Friday as it was confirmed that Prime Minister Theresa May would give a speech on Tuesday on Britain's plan to leave the European Union.

One-week implied sterling volatility — options contracts which allow traders to bet or hedge against near-term swings in the currency, spiked to their highest since October at 14.775.

It was also set to be the pound's worst week against the euro since the start of October. It barely budged at 87.25 pence per euro on Friday, but was down almost 2% from where it started the week.

Against the dollar it was a touch higher on the day at US$1.2180, but on course for its fifth weekly drop in the last six, having hit a three-month low of US$1.2038 on Wednesday.