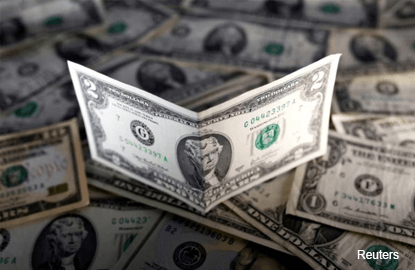 The dollar's rise, however, was tempered as traders were cautious ahead of U.S. President-elect Donald Trump's inauguration on Friday.

The greenback was little changed at 114.670 yen. The U.S. currency rallied nearly 2% the previous day, when it pulled ahead from a seven-week low of 112.570 and snapped a seven-day losing streak.

The pound, which had jumped 3% on Tuesday to vault above US$1.2400, following British Prime Minister Theresa May's Brexit speech, lost more than 1% overnight. It last traded at US$1.2277, up a fraction on the day.

The dollar was given a lift as U.S. debt yields pulled away from seven-week troughs and rose, after Yellen said on Wednesday that "waiting too long to begin moving toward the neutral rate could risk a nasty surprise down the road — either too much inflation, financial instability, or both."

"Yellen's comments were not particularly new, but it helped participants buy back the dollar which had sunk low along with Treasury yields," said Shin Kadota, senior forex strategist at Barclays.

"But the dollar is making less headway from these levels with Trump's inauguration looming. The Fed is poised to hike rates successively, but monetary policy would also depend to a large degree on Trump's policy specifics."

The market's more immediate focus was on the confirmation hearing of Steve Mnuchin as U.S. Treasury Secretary later on Thursday.

Dollar bulls are wary of Mnuchin, who will be in a position to influence the Trump administration's currency policy, potentially expressing concern about a strong dollar.

The dollar benefited soon after Trump's stunning U.S. election win in November, boosted by hopes that he would embark on fiscally expansionary policies and prompt the Fed to follow through with a succession of rate hikes.

But the greenback has lost momentum lately as financial markets have also begun focusing on other aspects of a Trump administration that may not bode well for the currency.

"The best case scenario for the dollar is if Trump provides specifics for this stimulus policies at the inauguration. On the other hand, the worst scenario would be Trump expressing a protectionist stance," said Koji Fukaya, president at FPG Securities in Tokyo.

The dollar's broad bounce has knocked the Aussie away from a two-month peak of US$0.7569 reached on Tuesday. The currency was lifted earlier in the month, thanks to higher commodity prices.