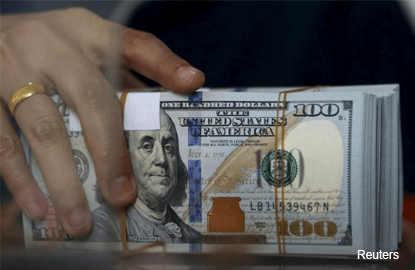 LONDON (Jan 26): The dollar rose against the yen and euro on Thursday but the prospect of stronger U.S. economic growth was not enough to drive the currency significantly higher, as the weight of bets on a stronger greenback made some investors nervous.

While equities and Treasury yields have continued to rise, fuelled by U.S. President Donald Trump's signals that he plans to increase public spending, expectations of a boost to growth have had a diminishing impact on the dollar in the past 10 days.

Currency market players have offered a variety of explanations for that breakdown, from concerns about Trump's protectionist bent to his warning over the dollar's strength and worries about his approach to geopolitical and social issues.

Either way, the squeeze on the huge bets on the dollar built up at the end of last year has now lasted almost a month.

"Positioning does seem to have overtaken the dollar bull arguments and there is an issue of credibility with Trump," said Richard Benson, co-head of portfolio investment at currency fund Millennium Global in London.

"It really has just been a position annihilation."

Trump has made several corporate-friendly decisions since taking office on Friday, including executive orders to reduce regulatory burdens on domestic manufacturers and to clear the way for the construction of two oil pipelines.

However, his broad but divisive plans to reshape U.S. immigration and national security policy rattled some investors, partly because the U.S. needs foreign capital to finance its large current account deficit.

If protectionism is the issue, it has not shown up in the currencies of some of the Asian exporting economies that, theoretically, should be most exposed.

The Singapore dollar dipped with the yen on Thursday but is trading around its highest since mid-November. The Korean won hit its highest since Nov 10 in Asian trading. Mexico's peso strengthened to a three-week high of 20.9300 pesos on Wednesday.

Among the group of G10 developed world currencies, the biggest gainer of the past fortnight has been sterling, up almost 6% from troughs hit on Jan 16. All eyes were on fourth-quarter GDP data.

"The market has been seeing the pound in a different light over the past week or so," analysts from currency exchange LMAX said in a morning note.

"While there remains risk for a hard Brexit, it seems more clarity on the matter has been alleviating some stress. At the same time, the big sell-off in the dollar has also contributed to sterling strength."