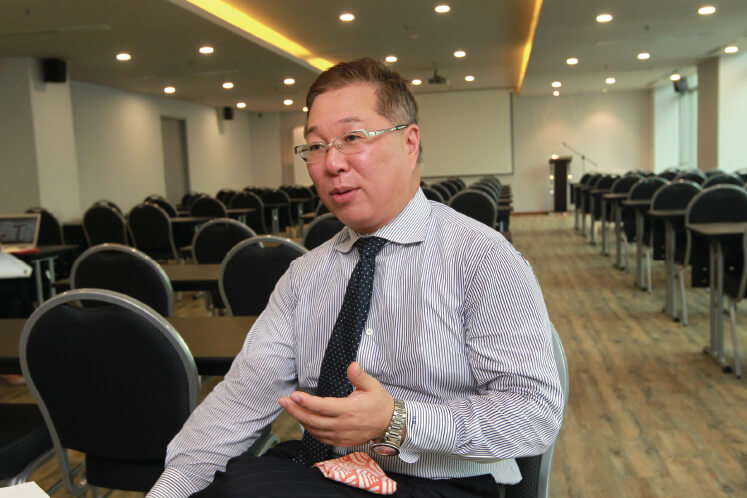 We came to Kuala Lumpur and noticed that hotel conference rooms were well-booked and expensive, compared with room rates. We thought there must be some frustration among the users, event organisers and corporations, and frustration usually leads to potential demand for an alternative. So, this could be an opportunity for us. > Hasegawa. Photo by Haris Hasan/The Edge

Vermiljoen Sdn Bhd is all set to disrupt the meetings and conferences market. Chairman Hitoshi Hasegawa says he is introducing a service that is already popular in more advanced markets such as Tokyo, London and New York.

He explains the concept: “Everywhere in the world, when you have conferences, workshops or seminars, you do it in hotel conference rooms. Traditionally, hotels built halls for weddings and other banquets, but many of these functions are held on weekends. They are vacant on weekdays, so hotels make them available to companies and organisers to host events.

“The hotel concept is usually not about renting out the rooms but about pushing food and beverage, so the pricing is based on the cost of food per person and whatever equipment or arrangements, such as flowers, they make available to the customer.”

This was the status quo in most markets until a few years ago (more than 20 years ago in the case of London), when companies realised that all they needed was a space to host meetings and all the other perks did nothing to add to the experience so much as to the cost. “They realised that not all companies need perfect food or flower arrangements or chandeliers or guys with bow ties walking around to serve them,” says Hasegawa.

About 10 years ago, Japan-based TKP Corp set up shop in Roppongi, which is in the centre of Tokyo. It had rented an old office building and did not know what to do with it.

“So, it turned the space into serviced offices and conference rooms without realising that the concept would catch on. Now, it has 1,733 rooms worldwide and has expanded to New York, Hong Kong, Shanghai and Singapore,” says Hasegawa.

London-based Etc Venues has the same concept, but an even longer history. It started in 1992 and had six locations by 2006. That year, it attracted the attention of a private equity firm, which thought it was a good business to invest in. Today, the company has 16 locations and about 650,000 people use its centres every year.

Then, there is the Convene meeting rooms, event spaces and conference centres in New York. “Two years ago, it only had two centres. Now, it has 10,” says Hasegawa.

Clearly, the concept has taken off in these markets. That is why Hasegawa decided it was time to try it out in Malaysia.

“Three years ago, we thought of doing this rental conference centre concept in Tokyo. But we looked at TKP and said, ‘There is no way we will be able to compete with these guys’,” he says.

“We came to Kuala Lumpur and noticed that hotel conference rooms were well-booked and expensive, compared with room rates. We thought there must be some frustration among the users, event organisers and corporations, and frustration usually leads to potential demand for an alternative. So, this could be an opportunity for us.”

“When we looked at the cost structure of running conference centres here, we thought we could make the pricing very attractive and competitive compared with the hotels. In fact, we could probably provide a 40% to 50% discount to what they are charging,” says Hasegawa.

Six months ago, he was presented with the opportunity to purchase a serviced office block at a prime location in Kuala Lumpur, but the deal fell through. “So, we looked at doing it ourselves. We decided that there was no real demand for serviced offices because locals can easily get SoHo (small office, home office) spaces and there are a lot of cheap alternatives. That is the point, we said. Maybe we should look at rental conference centres.”

Hasegawa says he picked up on the frustration felt by the users of hotel conference facilities. “The hotels do very well in terms of F&B but sometimes, the rooms are not suitable for business meetings and the prices are really high. Also, they are inconvenient to book. Often, you have to come over, see the room and decide on the food. The pricing only comes three to four days later. And then you negotiate.”

The other problem is that you cannot get a proper breakdown of the cost. “They tell you it is RM150 per person, all-inclusive. But you do not know how they arrived at that figure. So you say, ‘What if I get fewer snacks? How much will that impact the price?’ You just don’t know. And that is where the frustration is,” he says.

Hasegawa says there are philosophical differences around the world about how to charge for conferences. “Some people think ‘per person’ pricing is good because you can say, ‘I have this many people and I want to know how much you will charge per person’. To me, the ‘per person’ charge is a bit ambiguous because you do not know what portion of that is for the room, or the food, or the equipment.

“I prefer the way TKP does things. It tells you how much it costs per room, per hour. It also lets you know the cost of the food and what it charges for the equipment so you can calculate the per person cost by dividing that number with the number of people you have. If the amount is too high, you can decide to have fewer snacks or change to a cheaper room.”

MITIN’s online booking facility kicks off this month. “You get to pick what you want — which layout you want, what time you want — book it, pay for it and that’s it. There is no waiting for a quote and no need to negotiate or sign a contract. It is just click, click, click and pay with your credit card. You can have the rooms with just two hours’ notice,” says Hasegawa.

Layouts offered include classroom, U-shaped, island, hollow square and theatre settings (with no tables). “Some people prefer the island setting when they have a workshop. This is where you put two tables together and six people sit around the tables so they can work in groups. We can do different layouts and we can do it in 20 minutes because we have the laser points built in so that the chairs and tables can be arranged quickly and efficiently,” he says.

Another reason Hasegawa sees a growing market for dedicated conference centres is that more and more companies are repurposing the space dedicated for conferences or meetings. “We have been talking to some of our clients and they say keeping a room that can accommodate 170 to 200 people in their office space is costly, especially if they only use it once or twice a month. They can just call us and use our space for three to four hours a month,” he says.

The planning that goes into every detail at the centres is astounding. For instance, choosing the chairs. “We are really picky. I do not know how many different kinds of chairs and tables we looked at. We looked at them locally and also in China. We have had several vendors bring samples to our office or send samples to us,” says Hasegawa.

“The first thing we had in mind was that we wanted to get 180cm tables. This is a really standard size and can fit three chairs comfortably.”

The choice was between conference chairs and banquet chairs. “Office furniture suppliers do not make banquet chairs. Theirs are usually wider. A lot of Chinese companies make these chairs, but when we tested them, we found they were really shaky. And when we flipped them over, the welding and cushioning were not so great,” he says.

It took him three weeks to find the perfect chair. After looking at scores of samples, he found the perfect one in his own backyard, literally. “There is a small company in Port Klang that produces chairs for the Mandarin Oriental hotel in Kuala Lumpur and Eastern & Oriental Hotel in Penang. I said if the chairs are good enough for them, maybe we should take a look at the chairs. They were of good quality and the welding and everything else were great. So, we decided to go with them,” says Hasegawa.

Vermiljoen will be offering dedicated conference centres throughout the Klang Valley. “We now have a centre in The Weld (Jalan Raja Chulan) and another in Faber Tower in Taman Desa,” he says.

For its conference centre at The Weld, Vermiljoen is initially targeting offices that are within a 300m radius. “That is a five-minute walk so you do not have to bother about things such as parking. We are not big on the F&B thing. You can order bento boxes with a bottle of water for RM25 per head. But really, we try to tell our clients that they can just go downstairs. The place is full of nice restaurants,” says Hasegawa.

The Faber Tower conference centre is a bit different. “Of course, we would like to have clients at Faber Tower as well. But the reason we picked Taman Desa is because it is located outside the Kuala Lumpur area but close to Mid Valley at one end and Cheras at the other,” he says.

“It has great access. So, whoever does not want to come to the city centre can come for meetings at Taman Desa. The pool of clients that we are trying to capture for that centre is going to be a little larger. It has bigger rooms so it can accommodate more people.”

The company will be opening more conference centres in the city. “The city centre conference centres have a smaller radius in terms of catchment area, so we are considering areas such as the Ampang Park-Binjai area, perhaps a little bit closer to Bukit Bintang, the Masjid Jamek area and, maybe, KL Sentral. We hope to open three more centres this year and five more after that,” says Hasegawa.

Outside of the city, the company will be looking at areas such as Mutiara Damansara and other hot spots in Petaling Jaya. “Once we go outside the central area, it is not going to be about walking distance,” he says.

Hasegawa says he expects the company to do well because the concept has already taken off in other markets and the Malaysian market is ready for it. “We are hoping to do about RM200,000 in sales a month for each centre. At RM800 per room per hour, that is 250 hours. And with eight rooms, that is about 30 hours each per room per month. That would be about six events per month per room.”

If and when the concept catches on, he expects competitors. But he is not fazed as Vermiljoen will have first-mover advantage, to say nothing about its specially designed chairs.