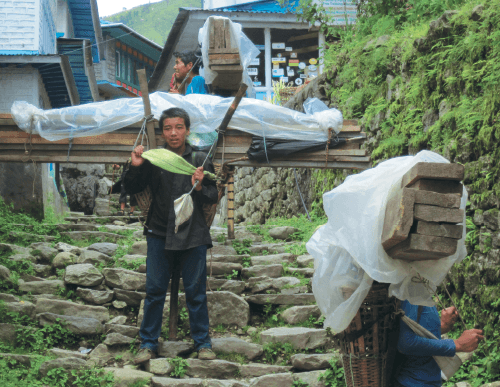 Shared experience of climb to Everest Base Camp

I was crying when I reached the Everest Base Camp (EBC) because I was so close to failing myself.

I was prepared to settle for less. I had wanted to give up and turn back without reaching the EBC when we stood aimlessly at a spot that was 20 minutes away from it.

I was cold and tired as we had been trekking from Lobuche for almost eight hours to reach that point that day.

“Let’s go back,” my mind pleaded over and over again, but somehow I could not bring myself to utter the words out loud.

The path to the EBC had been washed away by the rain over the past few days. Heaps of rocks had come loose and we had to tread carefully to avoid mishaps. We were standing in the middle of piles of rocks and the path did not seem to lead to anywhere.

Max, a guide for two other Malaysians whom we met on the trek, found the road for us.

“This is the beginning of an adventure,” Max said.

We had come a long way, and it was only logical to walk a little more to see if it would bring us to our destination.

When we reached a place that looked like a makeshift of the EBC, we exclaimed in joy and I started to cry. Laid atop the rock pile were flags and banners from other trekkers who reached the point.

It was a mixture of shame and a sense of achievement that we had finally achieved what we set out for.

My journey to see Mount Everest had been dotted with many similar moments — hardly heroic in the first place.

For many, hiking the world’s highest peak — Mount Everest — is a dream come true. The inkling had never occurred to me but somehow circumstances saw me join four men in a 5,364m journey to the EBC even though the trek was much less dangerous compared with hiking to the peak at 8,848m.

The EBC trail is located in the Solukhumbu District, accessible by flying from Kathmandu to Lukla. There is only a walking trek to reach the EBC, and we encountered some locals working as transporters carrying sundry goods and building materials to the tea houses located along the trail.

We took both routes in that we went from Namche Bazzar to EBC, passing the Cho La pass and then onto Gokyo Ri. We journeyed back to Namche Bazzar in our descent to Lukla — the gateway to Mount Everest range.

To access Lukla, hikers arrive by flight at the Tenzing-Hillary Airport on a craft that flies in daily from Kathmandu in the morning. The airport is dubbed as the most dangerous one in the world for its hilly terrain and short runway — the air traffic control is responsible to ensure safe landings.

Because we went between end of July and early August — the monsoon season — we had to wait for two days for clear skies, so that our plane could land. Our guide even told us he had waited for a record nine days for a trip many years ago due to bad weather in fall (September to November).

The autumn season is the best time to hike in Nepal.

A trek to EBC normally takes about 11 days, but one can be flexible with the schedule. Some hikers may not make it due to altitude sickness, like the Chinese hikers we encountered — who had to descend as two members suffered from altitude sickness.

Personally, the journey was a physical and mental challenge. And being the weakest among my teammates, I battled with my low self-esteem every day, and plan B — to turn back and descend — was always at the back of my mind. I was surprised and even proud that I completed the whole trek in one piece.

I found it surprising that the Internet did not have much information on what to expect during the monsoon season while trekking the EBC trail. I was expecting heavy downpours every day and being drenched while suffering from inconvenience.

However, it wasn’t that bad. There was sunshine in the morning and a drizzle in the afternoon which did not impose too much of a drawback on us.

We only found it cloudy most of the time, and we could not see the Everest peak at many spots — which can usually be seen easily during the autumn season. Even when we hiked up to Kala Pattar, we could only manage to get a glimpse of the outline of the peak. However, we had an outburst of joy upon seeing the peak when we were reaching the foot of Kala Pattar.

So, if you plan to go to the EBC during the monsoon season from mid-June to mid-September, rain gear is a must, and be prepared to be disappointed should you not see the mountain views. However, you’ll get to see the greens on the landscape and the small wild flowers dancing in the wind.

The highlight of the trek, for me, was not really the peak but the breathtaking Cho La Glacier — which is the impressive work of the nature and time. I kept thinking how many million years had to pass for a glacier to form and how deeply it was entrenched to the root of the mountain.

Later, I learned that the Cho La glacier (5,420m) was formed during the Ice Age and is retreating because of climate change. This is consistent with the heavy flow of water roaring downstream from its melting.

I felt small and humble when walking on the glacier, more so upon meeting a Nepali television journalist who was working on a story of the impact of the melting glacier to the folks in the region.

The entire experience was tough but I would say anyone, who has trained diligently, can do it. At points when the demon within tries to hold you back, you have to command strong will to reach the finish line. Supportive trekking partners, great porters and guides are also instrumental to success.

Looking back, I am deeply humbled and happy not because I “conquered” the mountain, but that I had beaten my own demon. I have also learned to deal with the fear of losing control as nature is the decision maker here.

The journey to see the Everest was not perfect, but the imperfections gave me opportunities to reflect on my weaknesses, to grow and finally experience the solace of letting go.

Chen Shaua Fui, who has trekked to Nepal’s Annapurna, is a writer at The Edge Financial Daily.

This article first appeared in The Edge Financial Daily, on March 12, 2015.