AMERICAN stock markets inched down on Wednesday as the US Federal Reserve Bank vowed to keep interest rates low for a considerable time after they wound down their quantitative easing programme at the latest Federal Open Market Commitee meeting on the same day. The S&P 500 Index inched down 2.75 points to close at 1,982.30 points, while the Dow fell 31.44 points to end at 16,974.31.

The FBM KLCI index traded in a wider range of 28.54 points for the week with slightly higher volumes of 1.58 billion shares to 2.29 billion shares traded. The index closed at 1,842.78 yesterday, up 3.23 points from the previous day as blue-chip stocks such as Felda Global Ventures Holdings Bhd, Genting Bhd, Hong Leong Bank Bhd, PPB Group Bhd and Telekom Malaysia Bhd caused the index to rise on constant nibbling activities.

The KLCI’s 18 and 40 simple moving averages (SMA) depict a marginally uptrend for its daily chart. However, the 50 and 200 SMA have also issued a “Dead Cross” and the index prices are still between these two SMAs. Therefore, the recent rebound from the 1,766.22 low is seen as a price rebound from oversold conditions. As such, we see diminished autumn selling pressure on the index.

Due to the rebound tone for the KLCI, we are recommending a chart “buy” on Hap Seng Consolidated Bhd. Hap Seng remains in an uptrend, despite the broader market sell-off at the beginning of October 2014 and even made a new 52-week high of RM4.32 on Thursday.

Hap Seng released its second-quarter of financial year 2014 results at the end of August. Looking at the results announcement, turnover for the quarter recorded a 33% year-on-year (y-o-y) growth while its operating profit grew 513% y-o-y. The improved profitability was attributed to higher revenue from all divisions except the fertiliser and trading divisions.

A check of the Bloomberg consensus reveals that no research houses have coverage on Hap Seng. This stock currently trades at a reasonable price-earnings ratio of 13.2 times while its price-to-book value ratio of 2.51 times indicates that its share price is trading at a large premium to its book value. The reported shareholding changes on Bloomberg revealed there was net buying from local investors over the past month.

Hap Seng’s chart trend on the daily, weekly and monthly time frames is very strong and is firmly up. Its share price has made a great surge since its minor weekly Wave-2 low of RM0.30 in October 2008. Since that RM0.30 low, Hap Seng surged to its recent October 2014 all-time high of RM4.32.

As prices broke above their recent key critical resistance levels of RM3.53 and RM3.81, look to buy Hap Seng on any dips to its support areas as the moving averages depict very firm short-to-medium term uptrends for this stock.

The daily, weekly and monthly indicators (like the CCI, DMI, MACD and Oscillator) have issued buy signals and now depict very firm indications of Hap Seng’s eventual move towards much higher levels. It would attract firm buying activities at the support levels of RM3.53, RM3.81 and RM4.31. We expect Hap Seng to attract minor profit-taking towards its only resistance and all-time high of RM4.32. Its upside targets are located at RM4.68, RM4.94, RM5.88 and RM7.47. 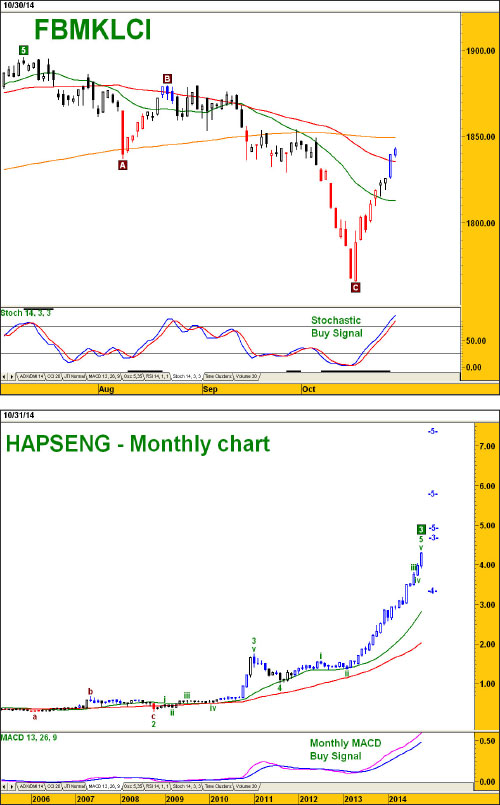 This article first appeared in The Edge Financial Daily, on October 31, 2014.