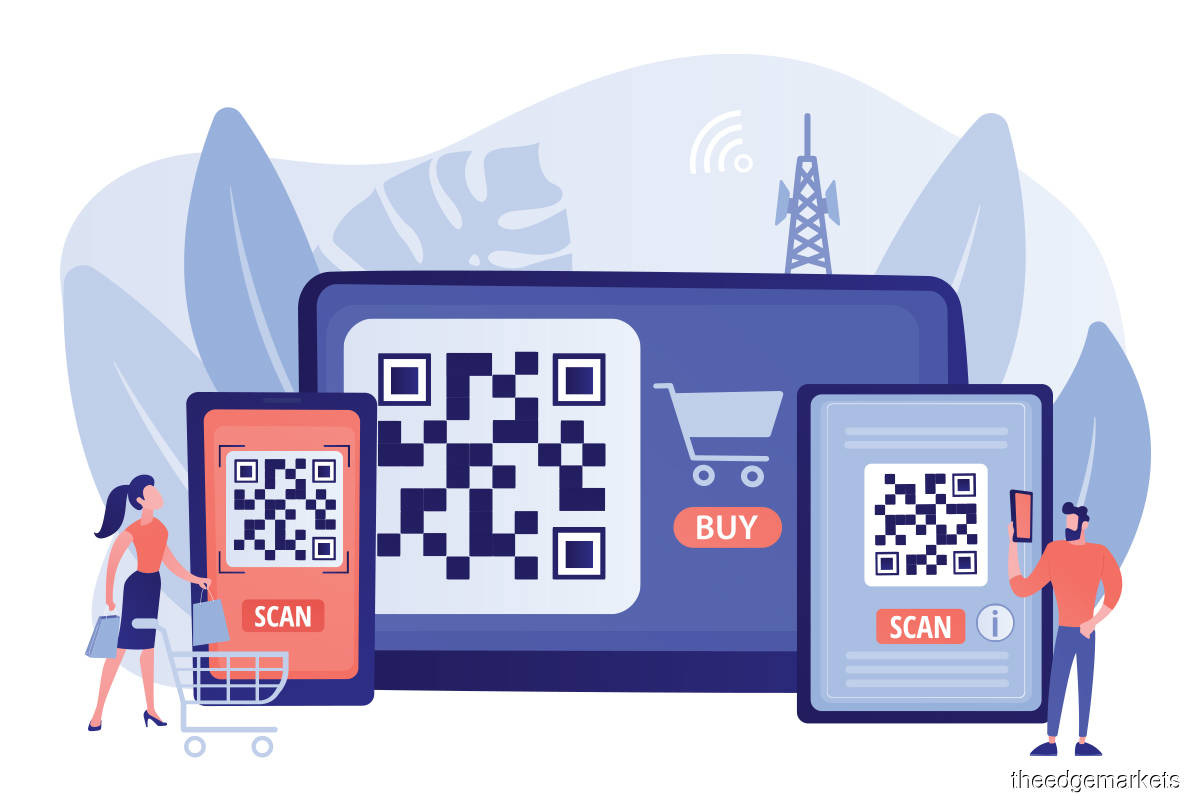 In the past, most of us would not leave the house without our wallets stuffed with some cash and our debit and credit cards, as well as our phones. But it is now possible to do so and to make all your payments with your phone.

This shift to cashless payments has been accelerated by the pandemic. People are afraid to touch cash and prefer to shop online more frequently. Also, more merchants have begun accepting cashless payments, according to various surveys.

In fact, e-wallet usage increased 89% to 468 million transactions over the past year (as at June), while merchants who registered to offer QR payments rose 57% to reach one million, according to Finance Minister Tengku Datuk Seri Zafrul Aziz.

Will this payment behaviour last? Industry observers believe that it will. The convenience of these cashless payment methods and improvements in the real-time payment network, also known as DuitNow in Malaysia, will entrench this behaviour. "Can we do transaction-based lending at scale to shop owners? We’re already seeing this in India. E-wallet operators know how many transactions are going through the wallets. They can start offering lending services.” - Sumit (Photo by BCG)

Real-time payments initiate, clear and settle payments almost instantly and are always online and available. Consumers can use their mobile phone numbers to transfer money to each other instead of memorising long bank account numbers. This is in contrast to Interbank Giro, for instance, which has some time limitations.

The other big trends that will solidify this behavioural change include the rise of digital banks, subscription-based services and payment offerings such as “buy now, pay later” (BNPL), as well as the introduction of a unified QR code, they say. All these trends will make cashless payments more convenient, cheaper and faster.

The unified QR code will be a game changer in this situation. In Malaysia, this takes the form of DuitNow QR, which is offered by many banks and e-wallet providers in the country.

“With this, people can pay from any mode using the same QR code. Merchants don’t have to display multiple QR codes and consumers don’t have to worry if their mode of payment will be accepted,” says Sumit Kumar, managing director and partner at the Boston Consulting Group.

Another game changer is the linkage of real-time payment networks between countries. This enables cross-border transfers to be done instantaneously and affordably.

In June, Bank Negara Malaysia completed the first phase of linking DuitNow to PromptPay in Thailand. Thai users can now use their mobile phones to scan DuitNow QR codes to make payments. Under phase two, Malaysian users will be able to use their mobile phones to scan Thai QR codes. Meanwhile, DuitNow is expected to be linked to Singapore’s real-time payment system PayNow in 2022.

“With this, it’s almost as easy to make a foreign payment as it is to do a domestic transaction. By 2022, I can just send money to my counterpart in Singapore using a phone number in real time. This kind of structural change will further accelerate the shift in digital payments,” says Sen Ganesh, partner at Bain & Co.

On the other hand, more businesses are moving into the subscription business model. BNPL is a subset of this as it allows consumers to split their payments over a longer period of time. All these involve cashless payments.

“One of our customers is PichaEats, a food catering company. It was doing corporate events before the pandemic. But it had to pivot to food delivery on a subscription basis after that. Now, it is generating most of its revenue from this model. We’ve also seen other industries move towards the [product]-as-a-service model as well,” says Zac Liew, co-founder and CEO of fintech start-up Curlec, which helps businesses collect recurring payments. "It’s still difficult for SMEs to accept a universal set of payments. When they do, they typically pay a significant portion of their revenue to accept it. I would love to make it cheaper for them to make and receive payments.” - Sen (Photo by Bain & Co)

Will there be a consolidation of payment types?

Most Malaysians are comfortable using multiple e-wallets and payment types at the moment, say the interviewees.

They may have a Touch ‘n Go (TNG) e-wallet for toll payments, a Grab e-wallet for deliveries, a bank app with DuitNow and QR pay activated, as well as debit cards for contactless payments. When doing online shopping, they may pay with FPX, so they don’t need to reach for their physical debit cards to fill out the details.

But as real-time payments and a unified QR code become more commonplace, will things change? For this answer, one can look to India, which made a huge push for cashless payments in 2016 and introduced its real-time payment system, United Payments Interface (UPI).

“When I scan my Google Pay at the shop in India, the money moves from my bank account to its account via the UPI infrastructure [instead of being stored in the e-wallet]. In that case, e-wallets have become irrelevant. The same is happening in Indonesia, which plans to follow India’s footsteps by 2025. The role of e-wallets will start to change,” says Sumit.

To stay relevant, e-wallets will no longer be a vehicle for consumers to store money but merely serve as a channel through which money is transferred, he says. But if bank apps that offer QR payments can do the same thing, e-wallets have to stand out by offering a better user experience, incentives and gamification.

Another aspect to consider is what payment types merchants encourage their customers to adopt, which depend on the charges they would have to pay their payment providers. This is where e-wallets will still be relevant because the rates charged are typically lower than that of credit or debit cards, says Sen.

“Merchants may find the card payment proposition unattractive for them and as long as e-wallets have lower charges, they will shift to that. The credit card reward programmes are also shrinking and directed at the most valuable customers, so we think the credit card take-up rate will become slower,” he says.

Banking apps that offer QR payments typically don’t offer as many rewards, he points out. However, banks tend to charge merchants less, so “merchants may give rewards to consumers who pay via banking apps. Bank apps work very well. If they can crack the rewards incentive, there could be quite a significant take-up,” he adds.

If e-wallets and banking apps become all the rage, there could be less demand for debit cards. Even FPX draws money from one’s bank account directly.

BNPL could also disrupt the take-up rate of credit cards. This is why companies such as Visa have been acquiring financial technology (fintech) firms to go beyond offering card services.

What does the future hold?

Cross-border transactions or remittances are an area that is ripe for disruption, say the interviewees. A tie-up between real-time payment networks between countries is the trigger that will enable many new innovations to occur.

The cost of remittances will go down, especially for the most liquid currencies and small value, frequent transactions, says Sen. This is typically done by people sending money abroad to family and friends.

“Cost is still an issue for banks because they have to park capital in foreign markets to enable cross-border banking. This trapped liquidity is where the real expense lies,” says Sen.

“Fintech players have an advantage as they provide solutions for high volume, low value payments. But they also struggle when it comes to larger payments because they don’t have enough liquidity.”

Digital banks will introduce more competition into the payment space. The margins made from enabling payments are small, Sen observes. But what digital banks could do is offer convenient payment methods to cross-sell consumers other products, such as investments and loans.

This is where the e-wallet players, digital banks and other fintech companies in the payment space could tap into. They have a wealth of data that can be utilised.

Sumit brings up lending as an example. “Can we do transaction-based lending at scale to shop owners? We’re already seeing this in India. E-wallet operators know how many transactions are going through the wallets. They can start offering lending services.”

“It’s still difficult for SMEs to accept a universal set of payments. When they do, they typically pay a significant portion of their revenue to accept it. I would love to make it cheaper for them to make and receive payments,” he says.

Banks and fintech companies can use data generated from the cashless payment platforms to offer financing and even create an ecosystem for SMEs.

“The Robinhood app by Siam Commercial Bank connects merchants with the bank’s customers. The platform allows SME merchants to sell their products to customers without being charged high commissions,” says Sumit.

As for Liew, he hopes regulators will be open to non-bank players being a part of the real-time payments network. Open banking initiatives seen in the EU should also be encouraged to allow for more innovation.

“We hope that in time, Bank Negara can encourage open data initiatives. I think it will create a better financial experience for everyone,” he says.