DiGi pushes ahead of its competitors

Coupled with DiGi’s strategy of providing affordable services, data traffic is up 88% y-o-y, also fuelling much of its earnings growth. The successful migration of its customers to a modernised billing network should also enhance its product offering and services, and is supportive of stronger net adds ahead.

We believe that DiGi remains committed to maximising shareholder returns. DiGi’s stock price is up 32% year-to-date (YTD), and is among the better performing telcos. Its stock price gain is nevertheless justifiable, considering that it is the only telco that has reported stronger earnings YTD.

DiGi’s stronger financial performance is attributed to revenue growth, margin expansion and lower depreciation charges. These have also been key in our “buy” rating on the stock.

We think DiGi will continue to outperform its peers in 2015, and likely to continue to gain revenue market share. This will continue to be premised on: (i) its improving network coverage and quality; (ii) strong distribution network; and (iii) improved billing system.

DiGi remains our preferred sector pick, both for its growth and dividends.

We believe management is committed to returning excess cash to shareholders and that it is still working on a business trust route which should pave the way for further dividend enhancement.

The goods and services tax (GST), which kicks off in April 2015, should also benefit DiGi the most among the telcos, given its larger contribution from the prepaid segment, assuming the GST is fully passed through.

Maintain “buy” for a TP of RM6.56. Key risks include capital outflows in view of increased macro concerns, given the decline in oil price and the weak ringgit. — AffinHwang Capital Research, Dec 29 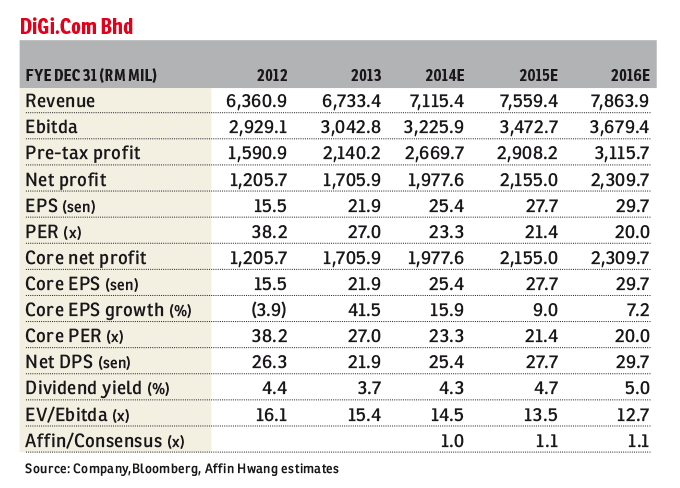