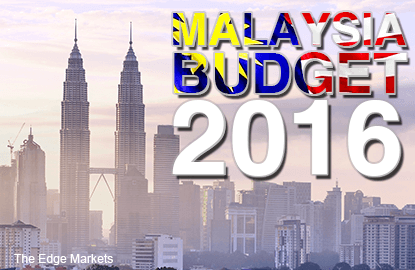 KUALA LUMPUR: Budget 2016, which was tabled last Friday, can be categorised as the most “difficult” budget ever for Prime Minister Datuk Seri Najib Razak.

For one, the prime minister had to table the budget, the first as the country embarks on its 11th Malaysia Plan towards Vision 2020, amid global economic uncertainty and, closer to home, harsh criticism of his leadership with a motion of no confidence filed against him by opposition leader Datuk Seri Dr Wan Azizah Wan Ismail last Thursday.

Even the tabling of the budget did not go without incident, as opposition members of parliament held up placards asking “Mana RM2.6 bilion?” or “Where is the RM2.6 billion?” at the end of the prime minister’s speech, referring to the RM2.6 billion credited into his personal accounts, as first reported by The Wall Street Journal.

“It is certainly a ‘difficult budget’ as it offered not much goodies and no new key measures to spur the market, but nonetheless is an attestation to the government’s steadfastness towards its fiscal goal,” MIDF Research said in a report last Friday.

However, despite the adversities, Najib delivered a budget which garnered mixed reviews with some likening it to “Robin Hood” — a fictional character who takes from the rich to give to the poor.

“Such an approach will undoubtedly start to get people talking about a certain Robin Hood quality to it all, but is ultimately taken because the government feels the need to do what it has to do, without resorting to an even more politically costly blanket tax increase for everyone,” OCBC Bank economist Wellian Wiranto wrote in a note last Friday.

For instance, children who a provide for their parents are given a total tax relief of RM1,500 for the mother and RM1,500 for the father. The relief is subject to the condition that each parent does not have income exceeding RM2,000 a month and must be 60 years and above.

Deputy Prime Minister Datuk Seri Dr Ahmad Zahid Hamidi was quoted as saying in a press conference on Budget 2016 that with the focus given to both the B40 and M40, the high-income group would have to bear the higher taxes.

“This means that there is income distribution from the higher-income group in order to protect the interests of the middle-income and lower-income groups," the deputy prime minister said.

One issue that has drawn some dissatisfaction from certain parties is the minimum wage, which was increased in Budget 2016 for private-sector workers in Peninsular Malaysia from RM900 to RM1,000, and from RM800 to RM920 for those in Sabah, Sarawak and Labuan. The minimum wage does not apply to domestic workers.

In a news report, the Malaysian Trades’ Union Congress expressed disappointment with the government, saying that it had expected the minimum wage to be set at RM1,200, on par with the minimum wage that was announced in the budget for public-sector workers.

Under the budget, the minimum starting salary in the civil service was set at RM1,200 a month, effective July 2016.

The Associated Chinese Chambers of Commerce and Industry of Malaysia (ACCCIM) expressed its surprise that the government had increased the minimum wage again, as the association had spent almost nine months adapting to the last minimum wage policy adjustment.

ACCCIM president Datuk Ter Leong Yap was quoted as saying he hoped the government could promote the productivity of the country with the increase in minimum wage.

The budget was also seen by some quarters as being more beneficial for the people in Sabah and Sarawak.

Among the goodies lined up for Sabah and Sarawak in 2016 is the RM28.9 billion allocated for the Pan-Borneo Highway, which would be toll free as announced by the prime minister.

Ahmad Zahid was reported in news portals as welcoming comments from the opposition, which stated that benefits under Budget 2016 for Sabah and Sarawak were meant to help the government win the state elections in Sarawak.

In terms of Budget 2016 wish lists for corporations, there were some hits and misses.

Two obvious misses were the absence of the developer interest bearing scheme, which property developers were hoping would be reinstated in 2016, and the non-reduction in the rate for real property gains tax — both crucial items on the majority of property developers’ wish lists.

“The 10 programmes for affordable housing announced by the prime minister is indeed a step in the right direction towards encouraging the rakyat to own properties,” Rehda president Datuk Seri Fateh Iskandar Mohamed Mansor said in a statement.

For the oil and gas industry, there is some cheer, as goods and services tax relief has been provided on the reimportation of equipment for oil and floating platforms that are temporarily exported for the purpose of rental and leasing.