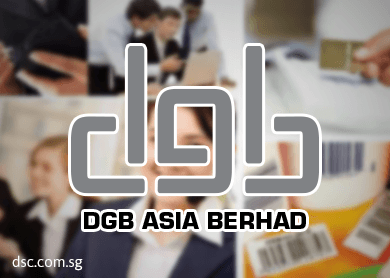 KUALA LUMPUR (Apr 30): DGB Asia Bhd, which fell 14.3%, was the most active counter in morning trades following the renounceable rights issue of up to some 355 million new ordinary shares in the firm.

The rights issue comes on the basis of two for every one existing DGB share held, together with up to some 266 million free detachable warrants, the software solutions provider told Bursa Malaysia yesterday.

“It seems there is no stability in share price after the rights issue,” InterPacific Securities’ remisier Sam Ng told theedgemarkets.com.

Ng noted that two weeks ago, DGB was traded at a six-month high of 14 sen on April 16. Compared to today, investors may have incurred an investment loss of about 32.1%.

A dealer who declined to be named opined DGB shares today were traded on volatility instead of fundamentals.

News reports have highlighted DGB is embarking on a joint venture (JV) with the Ministry of Finance-controlled Rofarez Solutions Sdn Bhd to invest in the development of a goods and services tax software.

DGB hopes to ink a deal within the next few months, adding the JV is expected to contribute significantly to the group’s earnings.