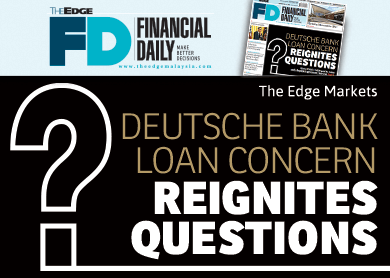 THE move by the consortium of banks led by Deutsche Bank to seek clarification from 1Malaysia Development Bhd (1MDB) about the status of a collateral that the investment strategic fund gave to get a US$975 million (RM3.6 billion) loan has reignited questions about 1MDB’s dealings with its Abu Dhabi partners. (See story below about the Deutsche Bank loan.)

This is because the US$975 million was used to terminate the options given to the International Petroleum Investment Co (Ipic) and its subsidiary Aabar Investment PJS to acquire up to a 49% stake in the future listing of 1MDB’s power assets.

The options were part of an agreement between 1MDB and Ipic which clearly favoured the latter, and turns the spotlight on whether the management and board of directors had compromised the interests of 1MDB.

To recap, in 2012, 1MDB, issued two tranches of bonds totalling US$3.5 billion to finance the acquisition of power assets from Tanjong plc and Genting Bhd.

The subsidiaries which raised the bonds were 1MDB Energy Ltd and 1MDB Energy (Langat) Sdn Bhd. The total proceeds after netting off expenses and fees to Goldman Sachs and other intermediaries were  US$3.1 billion, according to the two bond documents.

The two tranches of bonds were co-guaranteed by 1MDB and Ipic. The Ipic guarantee came at a very steep price because 1MDB agreed to the following:

i) Ipic got to keep RM4.25 billion, which is 38% of the net proceeds of RM11.16 billion as refundable security for providing the co-guarantee.

ii) Ipic was given 10-year options  to subscribe for up to 49% of the future listing of the power assets. Ipic transferred the options to its subsidiary Aabar Investments and hence the options are called the Aabar options.

Why did the management and board of directors of 1MDB agree to these terms that so highly favoured Ipic/Aabar?

As The Edge has argued many times, 1MDB’s style of borrowing is an extremely expensive one. It is ridiculous that a company gets to keep so little of what it borrowed. (See table.) 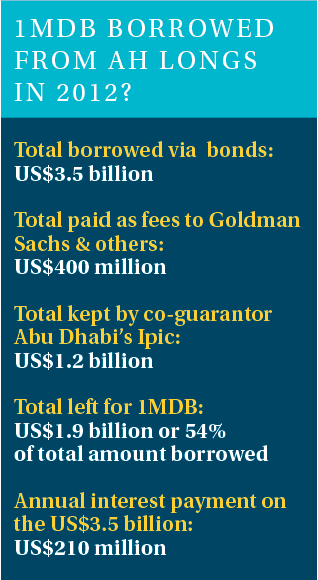 It is like borrowing money from Ah Longs (loan sharks)!

If that was not bad enough, 1MDB also agreed to share 49% of any upside on the power plants it bought through the Aabar options.

In its annual accounts for the financial year ended March 31, 2014 (which was submitted to the Companies Commission of Malaysia only in November), 1MDB made the following disclosures under Significant Events Subsequent to the End of the Reporting Period:

Second, it said that in May 2014, it had taken a bridging loan facility of up to US$250 million to finance the acquisition of the Aabar options.

Third, it was also revealed that on May 22, 2014, 1MDB and Aabar had signed a settlement agreement to terminate the options. No details were given except that the final settlement will depend on the final valuation of the initial public offering.

Lastly, 1MDB revealed that on Sept 2, 2014, Aabar had written to inform 1MDB that it did not wish to exercise the options and the company had “agreed to compensate [Aabar] at a consideration agreed under the terms and conditions” of the May 22 settlement agreement. These terms and agreement were never made public.

What 1MDB did not disclose was that on Sept 1, 2014, a day before it received the notification from Aabar, it took the US$975 million loan from a consortium led by Deutsche Bank.

This begs the question whether Arul was involved in putting together the loan to 1MDB and whether he was involved in the dealings of Ipic and Aabar with 1MDB when he was working in Abu Dhabi.

Given the fact that ADCB, Ipic and Aabar are all owned by the Abu Dhabi government, it makes Arul’s role as 1MDB president even more delicate and subject to scrutiny of  possible conflict of interest.

What is now known is that this US$975 million loan, which is due to be fully repaid by end-August, was used to pay Aabar to terminate the options. This loan was secured against the BSI  Bank Singapore account of Brazen Sky Pte Ltd — a wholly-owned 1MDB unit — which has now raised concerns because of a report that the assets are not what they were made out to be by 1MDB.