DesignWorks: Constructing projects with aesthetics and functionality in mind 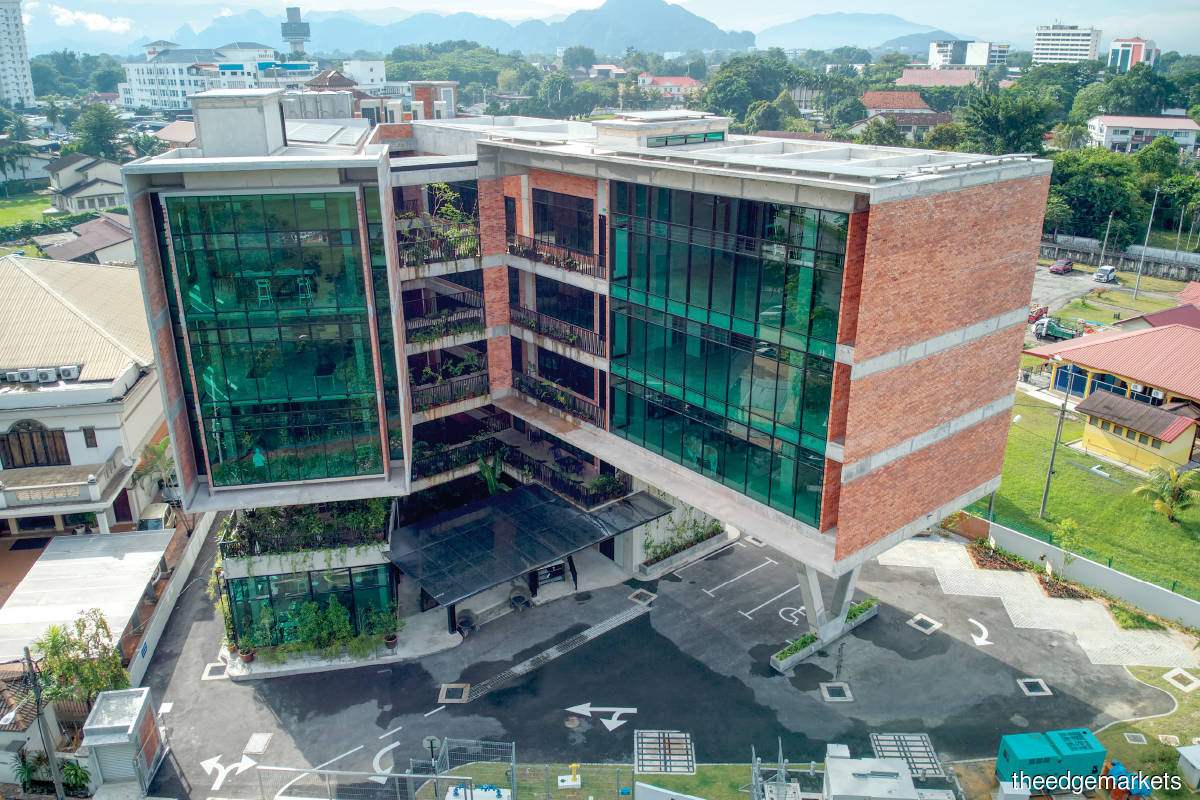 BVH Headquarters has a total built-up area of 29,474 sq ft and is set to be the first Green Building Index platinum building in Perak (Photo by Kuee Architecture)

Designing buildings that are aesthetically pleasing, functional and gentle on the environment is what Kuee Architecture does to tackle climate change.

Its founder and principal Shyuan Kuee says the firm is a strong advocate of simple and minimal design, where it eschews fanciful or abundant elements in its projects. “You can find similarities in the buildings that we do, where lines are crisp and, hopefully, pleasing to the eye, as well as environmentally friendly.”

Kuee Architecture was established in 2012. She started receiving commissions to design private bungalows for clients who believed in her despite her lack of experience.

The firm’s staff of 10 comprises architects, designers and draftspersons. “We were small in the first few years, but we were very active in pro bono projects then. The major turning point was in 2016, when we were appointed to design several buildings for the Perak Royal family after being recognised by them in a charity project. The Royal project, comprising five individual buildings in Ipoh and Kuala Lumpur, made us a little more well known and we have attracted many clients since, such as those looking for bespoke exquisite architecture design services,” says Kuee.

Along the way, the firm received more commercial commissions and the scale of the projects has been growing. Its current clients include Pantai Hospital Group, Choo Bee Metal Industries Bhd and Cycle & Carriage Bintang Bhd. The building has green features such as materials, water and energy that have been integrated into the design (Photo by Kuee Architecture)

Kuee says none of her family members are in the construction industry. “I grew up having a very strong interest in spatial relationships and how they could be defined by cardboards and blocks. I started drawing plans and building models at the age of seven. Upon completing high school, I did not have doubts about choosing my lifelong career, as I knew architecture was the only thing I wanted to do. I then spent three years studying architecture at the University of Sheffield in the UK and graduated with first-class honours in 2004. I decided to take up postgraduate studies in University College London after receiving a Building Design Partnership scholarship.”

Kuee hopes the firm will be involved in more green and sustainable building projects. “Housing projects remain our forte. Nonetheless, our projects have ranged from small-scale boutique cluster homes to more than 100 homes in new township developments. We also worked on projects in India and Myanmar prior to the pandemic.”

Architecture is a lifelong adventure, Kuee says. “I have so much passion in my work and I do not foresee an end to my career. I will keep exploring with my ideas and new technologies that will help us deliver a pleasant built environment. Star architects such as Zaha Hadid, Norman Foster and Kengo Kuma, who were devoted to their lifelong career, are great inspirations to me to continue contributing to the architecture and construction industry.”

Talking about the architecture industry in Malaysia, Kuee says it is important to look at the local tertiary education system, as it is a significant defining element in terms of how the industry will progress in the near future.

“I attended several local university architecture student reviews in the past few years. Although the general concepts and presentation skills of the students here are strong, the focus in general has very much been results-driven. When I attended architecture schools in the West, the design process has always been the priority. Fundamental to education there was the exploration of our thought process and less of the end-product,” Kuee notes.

It is a shame, she says, that students in Malaysia have not been encouraged to be more critical in finding themselves throughout the design process. “Consequently, this may affect the architecture industry in the long run, as we are trained to produce the finest drawings or videos instead of focusing on the fundamentals of being a radical, but responsible, architect. Many of our future buildings may risk ending up having no souls and being mere products,” says Kuee.

“There is much room for improvement in terms of the country’s tertiary education system, to encourage more radical and bolder representation among students by emphasising more on the design-thought process.”

Completed in 2021 and located in Jalan Lasam near the Greentown Business Centre, BVH Headquarters has a total built-up area of 29,474 sq ft and is set to be the first Green Building Index (GBI) platinum building in the state.

Kuee explains that the building layout was designed to follow the V-shaped site. With limited space on the ground, the main office spaces were lifted up to allow for more greenery, circulation and public areas at the street level.

“The client wanted the floating box concept, which coincided with the relatively smaller ground floor footprint design because of the site’s limitations. The centre of the building was opened up for a central courtyard, allowing natural ventilation and maximising daylighting into all spaces within the floor plates,” she says. The background colour of Pantai Hospital Ipoh is plain white, which is clean and blends easily with the existing wall (Photo by Kuee Architecture)

The GBI platinum rating means the building has green features such as materials, water and energy that have been integrated into the design to reduce the building’s impact on human health and the environment. In terms of the use of materials, Kuee says low-emissivity glass was incorporated in the façade facing west, where heat gain will be eliminated substantially. The client’s plan was to have cross-ventilation in the entire building, by having all windows openable at the north and south directions.

There is plenty of greenery on-site and most of it will be watered by recycled rainwater and greywater (domestic wastewater from bathroom sinks, showers and washing machines). “Minimal heat gain on flat surfaces is expected with reflective materials on the roof and the use of grasscrete pavement on the ground. As for construction management, it was important to ensure that construction waste was cut to a minimum and finished at its highest standard possible,” says Kuee. After 25 years of serving the local community, Pantai Hospital Ipoh initiated a rebranding exercise involving the renovation of the café, façade and the ward on Level Two. The hospital first opened its doors in May 1994.

The renovation was completed in 2020 with a total built-up area of 255,259 sq ft, and the design brief was to create a modern and sleek façade that accentuated the presence of the hospital. “As the site is located at a busy road junction in Jalan Tambun, we were very careful in selecting the materials and colour [so that they do not distract drivers]. The background colour is plain white, which is clean and blends easily with the existing wall, while the highlights used are the hospital’s corporate bright-blue colour,” says Kuee.

Framed by a distinct white frame consisting of aluminium vertical strips, the coloured fins are scattered in a well-planned yet seemingly random manner. The number of fins was maximised in the direction of both the east and west to prevent as much sunlight as possible from entering the interiors. Gaps of 200m were allowed in between fins to prevent strong winds from lifting the structure.

“To enhance patients’ experience, our radical design for the façade has carved out squares for existing windows to allow for direct views of the outside,” says Kuee.