BUDGET 2017 unveiled a RM3 billion small and mid-cap (SMC) fund to liven up the capital market. But thus far, reception has been lukewarm and understandably so.

The source of the fund has created the most scepticism since details are scarce. In his budget speech, Prime Minister Datuk Seri Najib Razak glossed over specifics, only indicating that the money would come from “government-linked investment companies” (GLIC).

It does not help that the proposed RM20 billion ValueCAP fund proposed in Budget 2016 has not made much of a splash. The only news on ValueCAP this year came in January when Khazanah Nasional Bhd announced that it had injected RM1 billion into the fund.

To be fair, these figures are relatively dated since ValueCAP does not regularly disclose its holdings. But given that the 100 largest stocks on Bursa Malaysia have a combined market capitalisation of RM1.36 trillion, ValueCAP’s presence in the market is a drop in the ocean.

On this basis at least, the SMC fund might have more success.

For clarity, let us define it to apply to stocks ranging from RM500 million to RM2 billion in market cap. (There are only 110 stocks with market cap exceeding RM2 billion, falling under the purview of ValueCAP’s investment mandate.) In total, there are 161 companies in this category at press time with a combined market cap of RM154.17 billion.

Note that the FBM KLCI Small-Cap Index has gained about 5.5% this year.

It should also be assumed that the SMC fund will be restricted to investing in sensible stocks that are grounded in solid fundamentals. The RM3 billion fund may be conceived to lend support to the market, but not at any cost. At the very least, it should avoid speculative stocks and unnecessary risks.

After all, the fund is utilising GLIC’s money and should aim to generate returns in line with comparable benchmarks.

Again, Budget 2017 was lacking in details on the SMC fund’s administration. However, Najib did say that the fund would be allocated to licensed fund managers.

Hence, it is safe to assume that the SMC fund should focus on stocks with promising earnings track record and prospects, as well as a sound balance sheet. On this basis, The Edge has narrowed down the possible stocks for the SMC fund to 52 (see table 1).

These stocks have a proven earnings track record — turning in a net profit for the past three consecutive financial years. On top of that, they also boast a net operating cash flow in the most recent financial year.

Stocks that saw share price or profit before tax decline by more than 50% year on year were excluded. Debt-laden companies with net gearing exceeding 1.5 times were also filtered out.

On top of that, illiquid stocks that have average daily trading volume of less than 20,000 share were also removed. Institutional buyers avoid illiquid stocks.

Stocks that had low institutional shareholding of less than 15% were also filtered out. It is interesting to note that most of the stocks featured in the table boast a healthy share of institutional holding. Lastly, stocks were limited to a maximum price-to-book ratio of seven times and a price-earnings ratio (PER) of 70 times. A relatively high PER was considered because high-growth companies can justify high valuations.

Real estate investment trust companies were also removed from the list. These already boast very high institutional shareholding and would not benefit from SMC fund investment.

Put it all together and these 52 stocks only have a combined market cap of RM52 billion. At this scale, the SMC fund’s RM3 billion would definitely have a noticeable impact.

Keep in mind that the SMC fund will have to be selective.

“No sensible fund is going to invest small amounts in many stocks. It isn’t good portfolio management. Their investments would be spread too thin. Even if you invest into a few good stocks that perform well, it will not be meaningful for the whole portfolio,” explains one fund manager.

For a fund of RM3 billion in size, he estimates that any investment in a stock would have to be about 5% of the total portfolio value. Of course, this will also be scaled accordingly to the market cap of the stock.

Funds normally prefer not to take substantial positions in a company. This is especially true in small-cap companies where unwinding a large position can quickly push down the share price.

Consequently, it is likely that the SMC fund can only realistically invest in about 20 to 30 stocks at the most.

So, which companies is the fund likely to focus on?

A number of interesting names pop up on the list. For starters, there is Uchi Technologies Bhd. It is one of the stocks that ValueCAP has invested in. According to Bloomberg data, ValueCAP has a 1.75% stake in the company as at Dec 31, 2015. Uchi Tech specialises in the design and manufacture of coffee-making machines.

Another stock on the list that ValueCAP holds is Ta Ann Holdings Bhd, albeit, only a 0.05% stake. Ta Ann is a timber logging concessionaire and oil palm planter based in Sarawak.

There are also a number of stocks that are perceived to be politically connected on the list. George Kent (M) Bhd’s controlling shareholder, Tan Sri Tan Kay Hock, is reported to be a golfing buddy of Najib.

Three years ago, George Kent was only a small RM261 million market cap company that specialised in manufacturing water meters.

Today, the company’s market cap has shot up to over RM1 billion after bagging a number of lucrative government contracts. It began with the RM1.01 billion signalling system package for the extension of the light rapid transit (LRT) Ampang line. Last year, George Kent (as part of a consortium) was selected as the project delivery partner of the RM9 billion third LRT line.

Another interesting company on the list is Destini Bhd. The company provides a wide range of engineering solutions from aviation to marine, and often secures work from the Ministry of Defence.

Prestariang Bhd is on the list as well. The company is reportedly negotiating for a project to revamp the IT infrastructure for the country’s immigration system.

Prestariang is also involved in a public-private partnership worth RM200 million — to provide IT infrastructure and technical support for two polytechnics that offer marine engineering and digital creative design.

Meanwhile, several politically controlled stocks also show up on the list. Most notable is Star Media Group Bhd, which is 42.46% controlled by MCA. Media conglomerate Media Prima Bhd also makes it to the list.

The Sabah government also makes an appearance on the list via its investment arm Warisan Harta Sabah Sdn Bhd. Warisan Harta has a 45.4% stake in Suria Capital Holdings Bhd, which specialises in port operations and logistics.

Other companies with interesting shareholders include Pharmaniaga Bhd in which Boustead Holdings Bhd holds a 56.4% equity interest.

Construction is one sector that is expected to benefit from the huge pipeline of infrastructure projects.

Another interesting construction player is Favelle Favco Bhd, a crane specialist. Favelle Favco boasts one of the lowest PE multiples on the list at only 5.91 times based on its closing price of RM2.33 last Thursday. Favelle Favco’s company’s parent, Muhibbah Engineering (M) Bhd, is also on the list.

Looking ahead, it still remains to be seen how quickly the SMC fund can be put together and deployed into the market, if at all. That said, it should have a more meaningful impact in the small and mid-cap space. The sum of RM3 billion may only constitute 5.8% of the combined market cap of the list of companies (RM52 billion), but it will certainly have a larger impact when focused on a smaller pool of stocks. 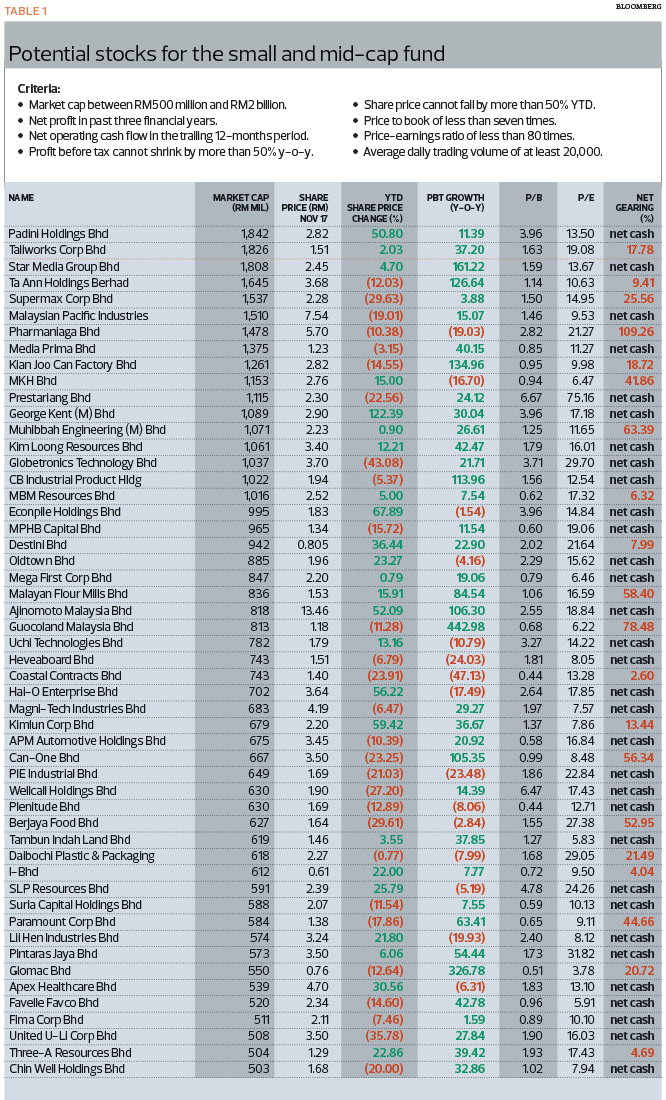 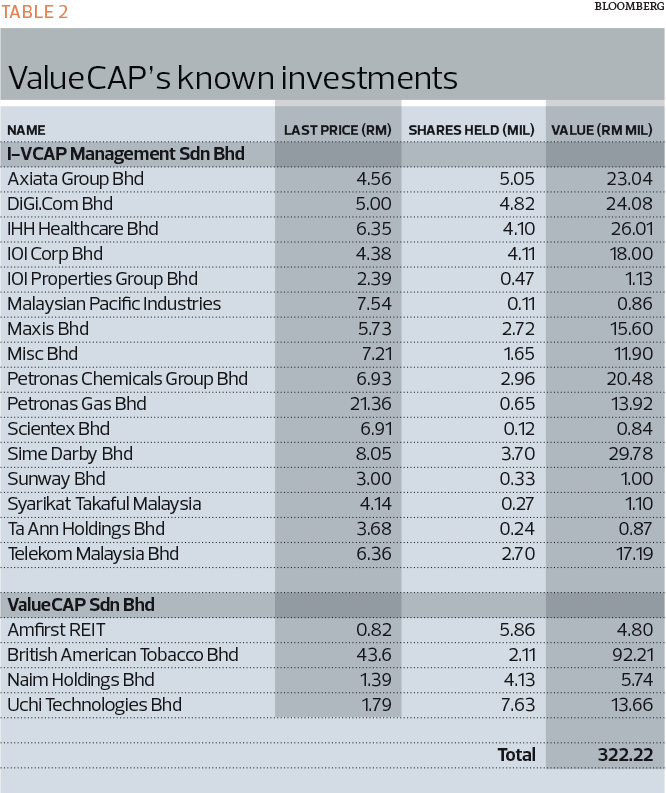