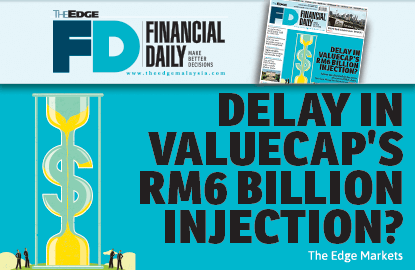 KUALA LUMPUR: State-owned investment fund ValueCap Sdn Bhd, which was expected to start buying up underperforming stocks on the local bourse this month, may see a partial delay in its first tranche of funding of RM6 billion.

A source familiar with the matter told The Edge Financial Daily that there had been a delay in the funds coming into the market.

This is because at least one of the shareholders has yet to allocate its RM2 billion share. Thus, the shareholders can only come out with approximately RM3 billion by the end of this year, with the remaining RM3 billion investment to be made in the first quarter of next year.

It was reported that ValueCap would be allocated the first tranche of the RM20 billion from its three shareholders — Khazanah Nasional Bhd, Kumpulan Wang Persaraan (Diperbadankan) (KWAP) and Permodalan National Bhd — by late November. The move was announced by Prime Minister Datuk Seri Najib Razak in September to boost the local bourse and shore up confidence.

KWAP chief executive officer Wan Kamaruzaman Wan Ahmad in October indicated that ValueCap should be receiving RM6 billion (RM2 billion from each shareholder) by end-November, the latest by December.

He added that most likely part of the RM6 billion tranche will be allocated this year, with the balance in the first quarter of 2016.

When contacted, all three shareholders referred the issue to ValueCap.

However, the fund had not responded to The Edge Financial Daily at press time.

Fund managers said any weakness in the market — following a widely expected move by the US Federal Reserve to raise rates earlier this morning — would present an opportunity for ValueCap to bargain hunt for beaten down quality stocks.

A head of research at a local brokerage said ValueCap’s injection would not be sufficient to mitigate further selling by foreign funds.

“If you look at the injection value, it is not substantial. A 2% reduction in foreign shareholding will probably translate into more than RM20 billion.

“If the total fund is RM20 billion, it may be enough [to support the market], but only RM3 billion, it is definitely not enough,” he said, adding that if foreigners start selling, local retailers would likely follow suit.

ValueCap was established in 2002 as an entity to support undervalued stocks, and the results were effective, as it managed to stabilise the stock market, according to Najib.