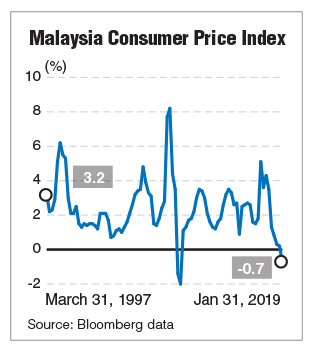 KUALA LUMPUR: The mild deflation in January is a temporary blip, economists say, adding that inflation looks set to accelerate in the second half of this year (2H19).

“The deflation largely reflects the base effect of the goods and services tax rollback in June last year and a reduction in retail fuel prices in line with lower global oil prices,” CIMB Investment Bank head of economics Michelle Chia told The Edge Financial Daily via email.

She opined that its impact on headline inflation is likely to persist until May, before inflation looks set to pick up in 2H19.

Although the deflation is not unexpected, it is larger than the consensus of a 0.4% decline in CPI, according to Citi Asia Economics Research.

“The lower average price of RON95 in January 2019, which recorded RM1.98 per litre compared to RM2.28 in January 2018, contributed to the decrease of the transport and overall index,” the Department of Statistics Malaysia said in a statement last Friday.

In addition, it said, the average price of RON97 fell to RM2.28 per litre compared to RM2.55, while diesel recorded RM2.12 per litre from RM2.31 in corresponding month of the preceding year,” it added.

Just hours after the statement, however, the prices for RON95 and RON97 were announced to rise by 10 sen beginning midnight last Saturday.

“Going forward, we expect inflation to trend upwards towards 2H19, given that domestic fuel prices are now on a partially floating mechanism and that the global oil prices are also on an upward trend,” said World Bank lead economist for Malaysia, Richard Record.

MIDF Research concurred, projecting an average of US$75 (RM306) per barrel of Brent crude oil this year.

In a note to clients last Friday, the research firm pointed out that the RON95 fuel subsidy is targeted only at the Bottom 40% group.

Should Malaysia be worried about deflation?

Economists said there is no real concern that the economy will tumble into a recession.

“Unlike in 2009 where the decline occurred during a period of recession and so was demand-driven, the decrease in the CPI this time is supply-driven, and mainly driven by lower fuel prices.

“In addition, the decline in CPI was partially as a result of the shift to the sales and service tax, which is levied on a smaller number of goods than GST,” Record said in an email to The Edge Financial Daily.

Rajiv Biswas, chief economist for Asia-Pacific at IHS Markit, is of the view that “a better measure of underlying inflation pressures in the economy is the core CPI, which rose 0.2% y-o-y in January, indicating very modest positive inflation”.

That being said, inflation throughout the year could remain “well contained” as other components of the CPI, such as clothing and footwear, communication and health, also showed price declines in January due to the continued base effects from the zero-rating of GST, he said.

Biswas said consumer spending, however, appears to have been boosted by the GST removal, as evident from the robust expansion shown in the fourth quarter of 2018, he said.

“Strong consumption spending growth is expected to continue in 2019,” he added.

Biswas said what is important for consumers is real wage growth, that is, an increase in wages after allowing for inflation.

The initiatives by the Malaysian government to drive growth of higher value-added segments of the economy in areas such as advanced manufacturing and services will be crucial to underpinning productivity growth,” he said.

CIMB’s Chia said it is not apparent that such deflationary pressure is creeping into wages due to a lack of demand.

“Particularly as Malaysia’s GDP growth remains near its potential,” she added.

The deflation could result in changes to official inflation targets.

Citi opined that both its and the government’s official 2019 inflation forecasts could be revised down.

“Factoring in future adjustments in tandem with our oil forecasts and disinflation from administered measures, inflation could average 0.4% through May and 2.5% in from June to December, with 2019 inflation at 1.6%,” the research team said.

Meanwhile, the government forecasts the range could be lowered by as much as 1% after Finance Minister Lim Guan Eng suggested on Feb 1 that the year’s inflation could come in at 1.6% to 2%, Citi analysts said.

Even so, interest rate cuts are unlikely.

“Low inflation alone is not yet sufficient to push the Monetary Policy Committee to cut rates,” the analysts said.

The view that Bank Negara Malaysia will keep its key interest rate at 3.25% was shared by MIDF Research and CIMB Research.

“The lack of price pressures, potential downside risks to Malaysia’s economic growth, and a more accommodative external monetary policy backdrop lead us to think that the central bank will maintain the overnight policy rate this year,” CIMB’s Chia said.