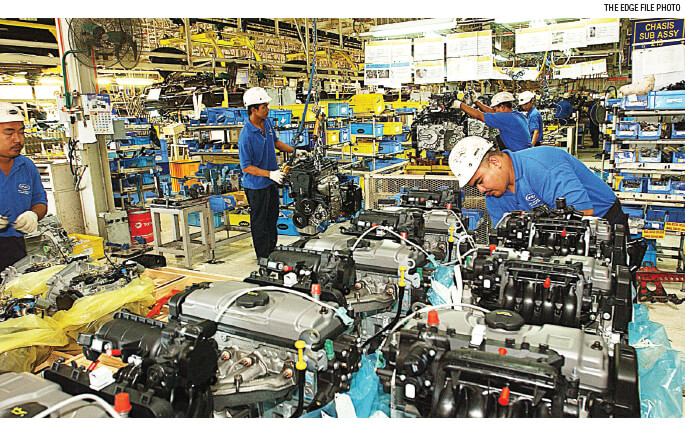 A firm domestic demand and a stable job market would support domestic-oriented industries.

KUALA LUMPUR: Malaysia’s higher-than-expected industrial production index (IPI) growth for December 2018 was partly supported by a rebound in the mining index, recording positive growth after a contraction in the previous month.

The Statistics Department said yesterday the 3.4% year-on-year (y-o-y) growth in the IPI was supported by increases in the manufacturing (4.4%), electricity (2.7%) and mining (1%) indices.

The rebound in the mining index, recording a 0.7% y-o-y contraction in November 2018, was contributed by the crude oil index, up 2.5%, more than offsetting a marginal 0.2% decline in the natural gas index.

CIMB Investment Bank (CIMB IB) economist Michelle Chia said the increase in the mining index was partly due to low base effects.

“Low base effects partly contributed to a recovery in the mining output, as reflected in the acceleration of crude petroleum output (+2.5% y-o-y in December versus +0.6% y-o-y in November) and a smaller contraction in liquefied natural gas output (-0.2% y-o-y versus -1.8% y-o-y in November).

“In the downstream segment, the output growth of refined petroleum products lost steam after resilient gains in the past two months (+1.7% y-o-y versus +5.3% y-o-y in November),” she wrote in a note.

MIDF Research said a steady pace of external trade supported the rebound in the mining and manufacturing indices.

“Looking ahead, we view the IPI’s performance to be in good position in the first half of 2019 (1H19) due to progressive trade negotiations between the US and China, a steady global demand particularly in the two countries, and a gradual pickup in global commodity prices and currencies.

“A firm domestic demand and a stable job market would support domestic-oriented industries, particularly [those dealing with] consumer-based products,” said the research house, adding that it forecasts an IPI growth of 2.9% for 2019.

MIDF Research had expected  a solid December IPI performance and hints at an improved fourth quarter of 2018 (4Q18) gross domestic product (GDP) growth for Malaysia, forecasting an expansion of 5%, based on the average IPI growth for the quarter of 3.5% y-o-y.

The GDP data is due to be released on Feb 14.

Chia, however, is not as optimistic about Malaysia’s economic growth for 4Q18, forecasting a slower expansion of 4.2% y-o-y, amid contractions in the commodity sector and a moderation in consumer spending, manufacturing and construction.

She said the services and manufacturing sectors remain the key contributors to growth, while the construction sector is aided by a resumption of government spending. The mining sector will be supported by an uptick in crude petroleum and gas production.

Goh said regional growth trends levelled off towards the end of 2018, but warned of renewed caution on the global economy amid weaker corporate earnings and slower manufacturing activities; a lack of clarity on US policy; and lingering trade tensions between the US and China, which could dampen consumer and business sentiments and pose downside risks to growth.

“This is reflected in the dovish tone of many central banks, mirroring a shift in stance at the US Federal Reserve System. Several regional central banks have now kept policy rates unchanged after several hikes last year,” she said.

She noted that India was the first country to cut rates, citing the slower growth environment and a tame inflation.

Goh said despite calls for more policy rate cuts, Bank Negara Malaysia has kept a neutral tone. The research house is expecting the central bank to hold its overnight policy rate at 3.25% for 2019.